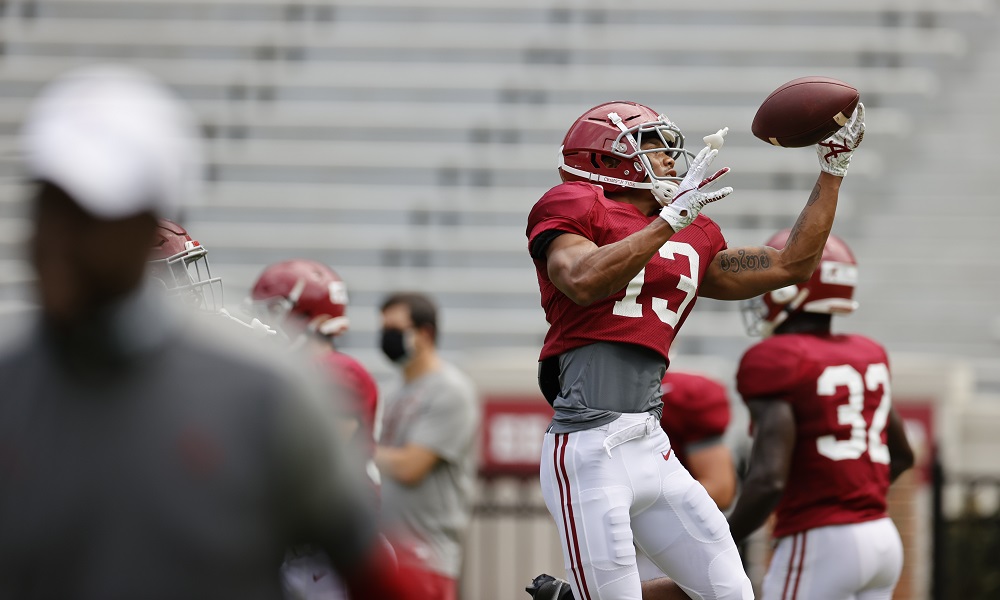 The next Alabama player and the fourth freshman, who Touchdown Alabama will spotlight is true freshman defensive back, Malachi Moore.

Summary: Malachi Moore’s transition to become a safety began a year ago during his senior season at Hewitt-Trussville High School.

With a background as a corner back for most of his high school career, Moore has the skill set to play multiple positions within the secondary. The former 4-Star recruit has above averaged defensive back technique with flexible hips, which allows him to change directions in pass coverage efficiently. This combined with his knowledge of the game makes him a great defensive back prospect.

During his time at Hewitt-Trussville, he was often matched up one on one with some great wide receiver prospects, including current Georgia Bulldogs wide receiver, George Pickens, and current Oklahoma wide receiver, Jadon Hasselwood. So, there is no denying that Moore is battle tested. However, his biggest strength lies within the level of physicality he brings to the gridiron.

Throughout Moore’s growth as a defensive back, it has been evident that he loves contact and being physical. This aids him in multiple ways on the defensive side of the football as he is a defensive back, who is willing to come down to help in run support.

Summary: Moore may not have break away speed, but he makes it for it with his quickness to the football.

He played basketball early on in his high school career and brings that to the table. One can easily see how defenisve techniques from the hardwood translate to the gridiron when looking at the way Moore floats around the secondary in coverage.

All signs point to Moore seeing playing time this upcoming season as the Crimson Tide will have a relatively young secondary. The departure of Jared Mayden, Shyheim Carter, Trevon Diggs and Xavier McKinney has left some holes in Alabama’s secondary, which has left the door open for freshmen like Moore to work their way into Alabama’s secondary rotation. At the moment, Moore is expected to be one of the first freshmen on the field for Nick Saban and company this season.

Moore was a bit of a sleeper coming into Alabama’s 2020 fall camp, but looks to have made a name for himself early on during his time in Tuscaloosa. The Hewitt-Trussville product may have an opportunity to be a breakout player as a freshman.

﻿
Emil Ekiyor is viewed ‘as a starter’ for Alabama on its offensive line, per Nick Saban
Alabama QB Mac Jones has ‘lit a fire’ under the offense
To Top