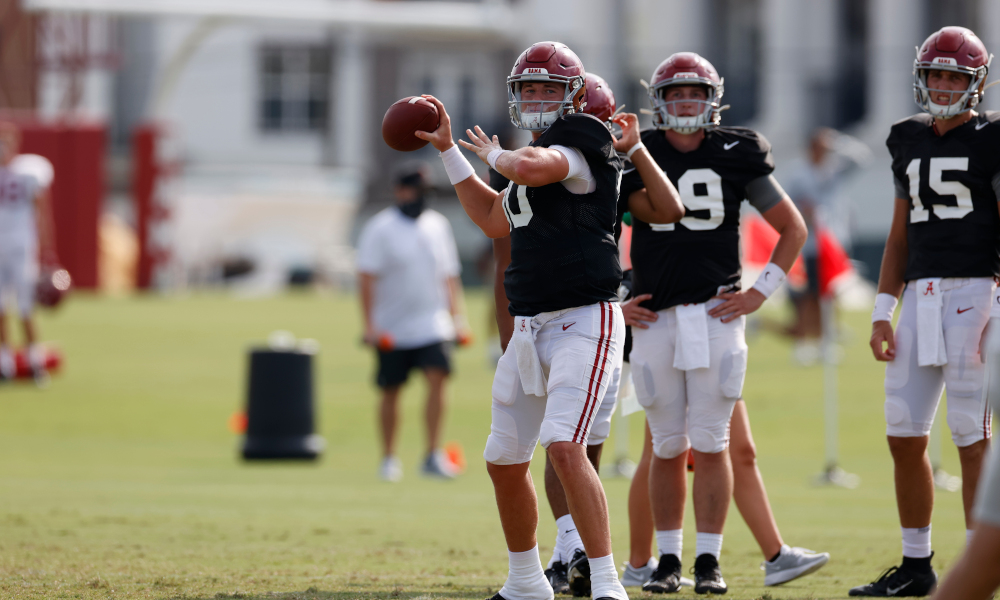 Although Nick Saban has not officially named a starting quarterback, some signs appear to point towards junior signal-caller Mac Jones getting the nod for the team’s week one game against Missouri.

During fall camp Jones showed steady improvement throughout as he finally had a chance to work with the first team offense extensively for the first time since January. And according to his own teammates, Jones has given the offense the extra boost it needs.

“He’s a great player and great leader,” said defensive lineman D.J. Dale on Thursday during the team’s player interviews. “You can see he lights a fire under our offense. Everything has come together.”

Offensive lineman Landon Dickerson had also shared his praises for the Florida native, noting that he has the utmost confidence in Jones’ ability to lead the team.

“No matter who is in at quarterback they have to control the situation,” said Dickerson on Thursday. “I feel very confident in Mac with that, the other QBs do as well. They’re very poised and they have a plan.”

During his first scrimmage, Jones had completed 21 of 36 passes in an effort that didn’t quite meet the expectation of head coach Nick Saban or himself. But as the team has progressed through camp, Jones has been able to display some of the talents he had shown during the ending stretches of last season when he stepped in for an injured Tua Tagovailoa and helped Alabama win the Citrus Bowl.

“When Mac stays in himself and is concerned about doing what he’s supposed to do and executes and does the things that he’s coached to do, he’s very, very effective,” said Saban on Wednesday. “When he stays focused on the play, doesn’t get upset about what happened on the play before, he’s very, very effective. He has shown an ability to do that much better this year. I think it’s a sign of maturity and understanding what he has to do to play winning football at his position.”