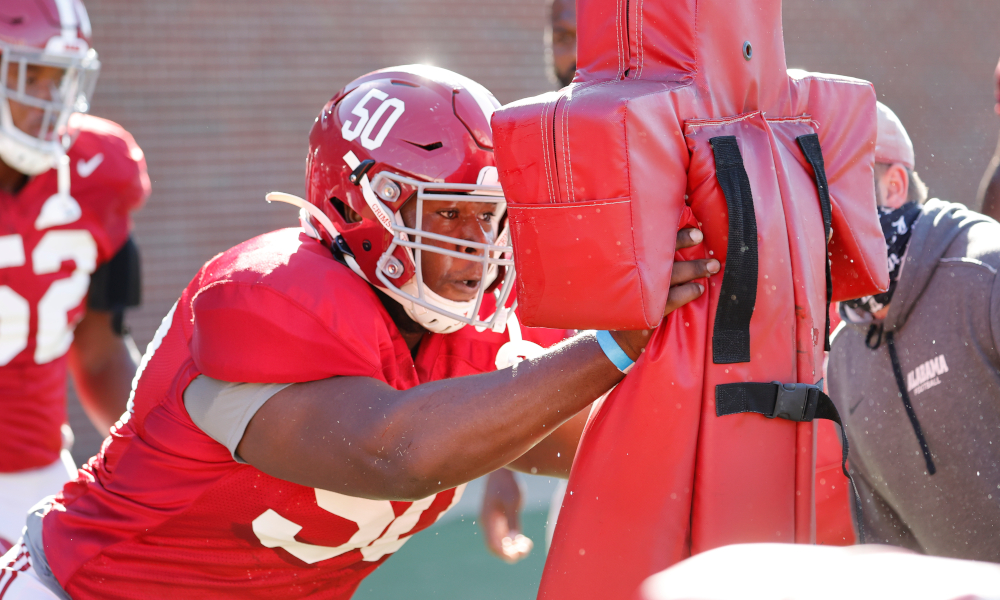 For the ones who study the game of football and others that watch for enjoyment, there is a never-ending conversation on what’s the most important defensive position. The individuals that favor roles of glamour would look at linebacker, cornerback or safety.

Defensive ends are on the front line; however, the amount of one-on-one battles it can win to sack quarterbacks has it as a position of interest too. Honestly, one can make the argument that defensive tackle and especially nose guard is the most significant spot on defense. At the University of Alabama, the nose tackle is responsible for occupying two gaps or attacking the play head-on — if it wins its first assignment.

Nose guards open everything for defensive ends, linebackers and ultimately, players in the secondary as well to have success.

Some respectable names have come through the program at nose tackle, including Terrence Cody, Marcell Dareus, Josh Chapman, Jesse Williams, Da’Ron Payne and Quinnen Williams to name a few.

*Dareus replaced Cody at NT on third-and-long in 2008

DJ Dale (sophomore) is doing well now, but a different beast is coming.

People like to compare current Alabama players to one specific former standout; however, this exercise is futile when discussing Tim Smith.

A true freshman from Sebastian, Fla., Smith is a combination of Dareus, Payne and Williams.

The 6-foot-4, 320-pounder had a good junior season at Sebastian River High School, but his senior tape had recruiting analysts flipping out and college coaches screaming. While he juggled defensive tackle, nose guard and defensive end in 2018, his main focus was nose tackle in the following year. Upon viewing his film from last season, Smith’s power, speed, explosiveness, length and hands immediately got the attention of yours truly via Touchdown Alabama Magazine.

He was splitting double-teams, dominating one-on-one’s, ripping quarterbacks down with one hand, forcing fumbles and blocking field goals.

After each play, Smith would hit the Quinnen Williams’ celebration: folding his arms together in a pose.

These are the athletes who want to compete against the best in practice and push for a chance to play. For them, it is not always about playing early. Instead, they are the ones who are bought in to the developmental aspect of the game.

In seeing the likes of Dareus, Payne and Williams all selected in the first round of the NFL Draft, Smith knows the path and is prepared to go after it. He destroyed the competition at nose tackle — collecting 62 tackles, 32 tackles for loss, 10 sacks, four forced fumbles and one fumble recovery in his senior year of high school.

Part of the reason for him being so compelling was he dropped weight before his final season.

Smith was a little heavy as a junior, but he returned as a terminator and a fast one at that.

He lost a few more pounds during fall camp at Alabama.

Smith pushed the competition and impressed everyone, as he earned the No. 2 spot behind Dale at nose guard. With an injury to LaBryan Ray and another player banged up, Smith had his number called versus Georgia. He held his own and assisted the Tide in holding the Bulldogs off the scoreboard in the second half.

Dale was proud of Smith’s performance and praised his work ethic.

Coach Saban is going to continue working Smith into games and with Ishmael Sopsher in the transfer portal, Alabama fans can expect to see more of the four-star in the future. When it comes to interior play, Williams had the single best season for the Crimson Tide in 2018. He posted 71 tackles, 19.5 tackles for loss (team-high), eight sacks and 12 quarterback pressures.

A native of Birmingham, Ala., Williams won the Outland Trophy that year and was drafted by the New York Jets at No. 3 overall in the 2019 NFL Draft.

During a conversation with Brent Beaird, a college football analyst for First Coast News, he said Smith has the initial burst, quickness and disruption to do what Williams did.

“He just engulfed ball carriers,” Beaird said of Smith. “He was virtually unblockable too. Just a tremendous prospect. He will play sooner rather than later.”

He was a major difference maker in high school, but now Tide fans are excited for the beast to be loosed upon college football.