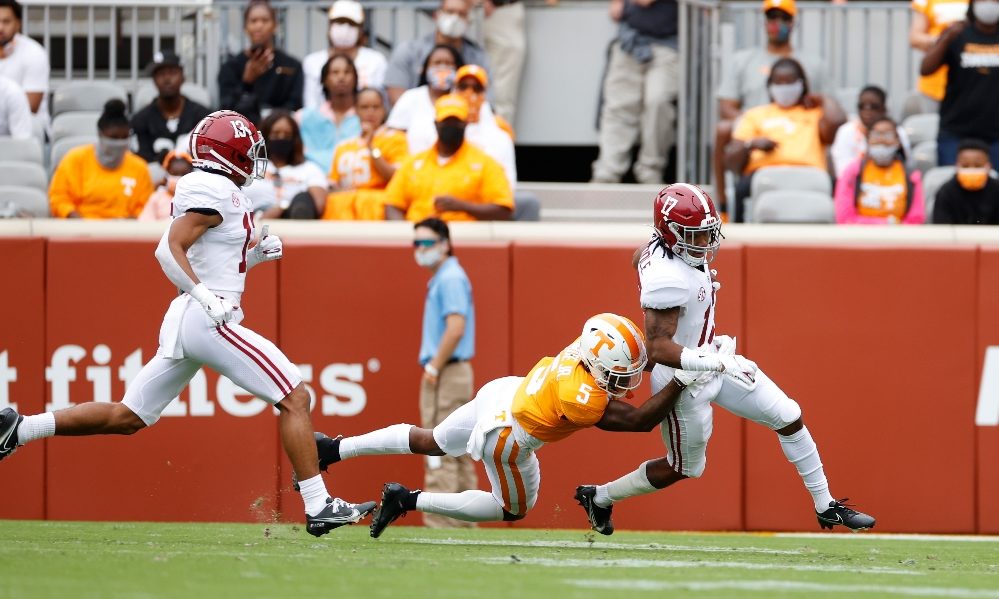 One play into Alabama’s game against Tennessee and the Crimson Tide were at a loss as wide receiver Jaylen Waddle went down with an ankle injury which head coach Nick Saban later said that he would miss the remainder of the season.

“It’s really a sad time for me, for Jaylen Waddle and his family,” Saban said following the game. “He’s got a very similar injury to what Kenyan Drake had. It’s a high ankle sprain but also a fracture, so they’ll probably have to do surgery on him. We’re gonna fly him back privately with doctors and take him right to Birmingham and see what we have to do right away. But that’s the case — and we’re pretty certain that it is — that he would probably be out for the year.”

Waddle going down is a true shame for he was in the midst of a breakout season in his junior year. In four games he amassed 25 catches for 557 yards and four touchdowns before the injury.

“The guy’s a great player,” Saban said. “He’s a great teammate. He’s an exciting player to watch. Hate that people in college football can’t see a great player the rest of the season.”

Alabama picked up a few other injuries throughout its game against Tennessee on the offensive side of the ball. Offensive lineman Deonte Brown had to leave the game with a shoulder injury which prompted Landon Dickerson to move from center to guard and bring in Chris Owens.

Running back Brian Robinson also suffered a few injuries against the Volunteers and Saban gave a quick update on the two of them as well.

“Deonte dinged his shoulder a little bit,” Saban said. “I don’t think it’s anything that serious. But with the game being like it was, we were really looking for an opportunity to play some other guys at some other positions. They may have to play down the road anyway. B-Rob got a little nicked up, so we kept him out. We just kept a couple guys out that we just didn’t want them to get any more banged up, and it gave some opportunity for some other guys to play.

It was good for Chris to play center. Chris played tackle. It was good to get those guys some playing time.”

Tight end Miller Forristall also appeared to injure his shoulder during one play in the game. Forristall was banged up last week against Georgia with a lower-body injury but was able to return to that game and did the same against Tennessee today.