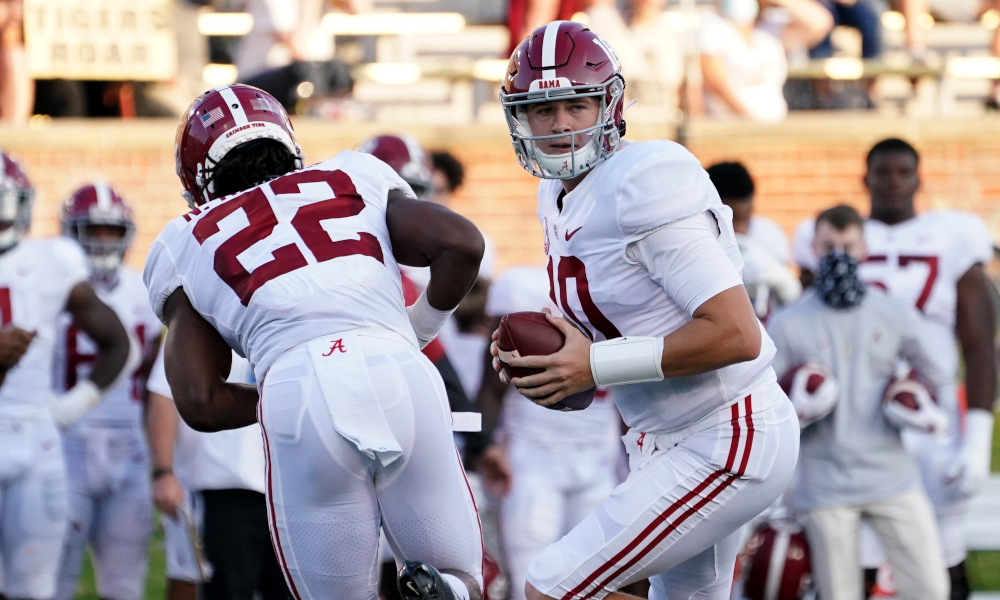 We are at the halfway point of the college football season for the Southeastern Conference, and it is time to start considering a Heisman campaign for Mac Jones and Najee Harris.

Both players at the University of Alabama have been exceptional.

Offensively, the Crimson Tide has been highly explosive and it is due to the success of Jones and Harris. The duo has the Tide averaging 48.8 points per game, which is first in the SEC and third in the nation. Also, Alabama ranks first in the conference and third nationally for total offense with 566.4 yards per game.

Nick Saban’s team is 5-0 heading into its meeting against Mississippi State on Saturday at Bryant-Denny Stadium, and it is pushing for an opportunity to win a national championship.

In replacing Tua Tagovailoa as the starting quarterback, Jones has exceeded expectations.

He has totaled 1,905 passing yards (leads SEC) with 12 touchdowns to two interceptions.

Jones has three 400-yard games, making him the lone signal caller in Tide history to do it.

He has been awarded SEC Offensive Player of the Week three times for his performances versus Texas A&M, Georgia and Tennessee.

His accuracy, ball placement and leadership has led to nearly three wide receivers — DeVonta Smith, Jaylen Waddle and John Metchie — averaging 100 yards a game. During his run to the Heisman Memorial Trophy in 2019, Joe Burrow of Louisiana State University had a full schedule that included lower-tier competition.

At this point, Jones has a higher completion percentage, more passing yards, and a better total QBR.

As for Harris, he is running with purpose.

The 6-foot-2, 230-pounder returned to school to improve his value for the NFL Draft and he has done it. Harris is averaging nearly six yards per rush (5.78) and 119 yards per game. He has two 100-yard outings, including one 200-yard output in a 63-48 victory for Alabama over Mississippi.

Once a five-star in the Crimson Tide’s 2017 class, Harris pounded the best run defense in college football for 152 yards with one touchdown in the Tide’s 41-24 win over Georgia. He has collected four 100-yard games from scrimmage, and the latest one came in a matchup with Tennessee.

Despite a season-ending injury to Jaylen Waddle, the talented runner pushed Alabama to victory.

He currently is ninth all-time in Alabama football history for rushing yards (2,972) and tied for sixth in touchdowns (34).

Harris is 28 yards away from becoming the ninth running back in the 3,000-yard club for the Tide.

Jones and Harris have both been impactful to Alabama’s success. Although other people look at Trevor Lawrence (Clemson) and Justin Fields (Ohio State) in terms of quarterbacks, it is time to start campaigning Jones for Heisman. The same thing needs to be said of Harris. College football is filled with great backs, but Harris is leading the group right now. According to a graphic from College Football on Fox via Twitter, his statistics through the first five games are better than Mark Ingram’s (2009) and Derrick Henry’s (2015) from their Heisman-winning seasons.

The last two RBs to win the Heisman Trophy came from @AlabamaFTBL and @ohthatsNajee22 is pacing ahead of both of them through 5 games ?? pic.twitter.com/2gxrr1QtaN

If nothing else, both Jones and Harris should get invited to New York City for the presentation ceremony.