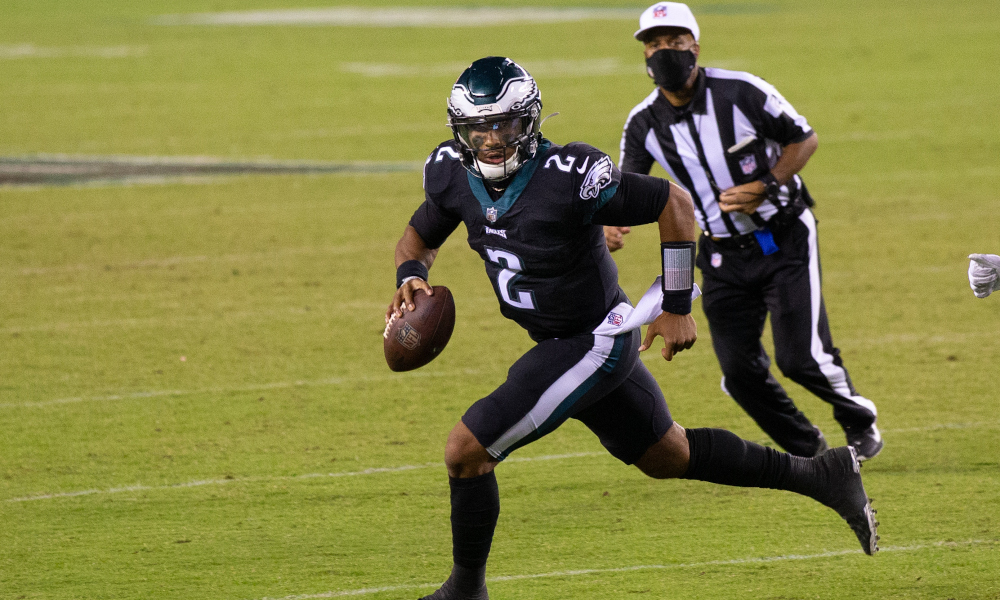 The cries for Jalen Hurts are getting louder in the city of brotherly love.

Despite the Philadelphia Eagles leading the worst division in the National Football League with a 3-6-1 record, the team has not looked good all season. Doug Pederson and company dropped its sixth game to the Cleveland Browns on Sunday and though the coaching staff loves Carson Wentz, he has struggled tremendously in tossing for 12 scores and 12 interceptions.

Eagle fans have always been a proud group that desire excitement and excellence.

Neither of those things are happening with Wentz under center and many are calling for a change. Terrell Lewis, a rookie linebacker for the Los Angeles Rams and former Alabama standout, is one of them. During the matchup between Eagles and Browns, he tweeted “Free Jalen Hurts” on social media. Philadelphia took the former Crimson Tide quarterback in the second round back in April. The Eagles have used Hurts on gadget plays, but Lewis and others know he is ready to lead an offense.

Lewis, a native of Washington, D.C., saw the native Texan win the starting job at quarterback for the Tide and compile a very successful career. Hurts tossed for 5,625 yards with 48 touchdowns, while totaling 1,976 rushing yards with 23 scores.

He was on two Southeastern Conference title teams, including one in 2018 where he came off the bench in the fourth quarter and delivered the program to a championship. Hurts replaced an injured Tua Tagovailoa against Georgia and ended his tenure ranking eighth all-time for passing yards, third for touchdown passes, third for total scores (71) and fourth for total offense (7,606 yards) in school history. He also guided the Tide to a College Football Playoff National Championship in 2017.

In one season at Oklahoma, Hurts was a Heisman finalist, a Big 12 Champion and took the team to the CFP in 2019.

He has the character, toughness, leadership, improved passing mechanics and overall skill set to be special for the Eagles, but will Pederson unleash him? The fans want to see him and Hurts’ former college teammate thinks he is the best option.