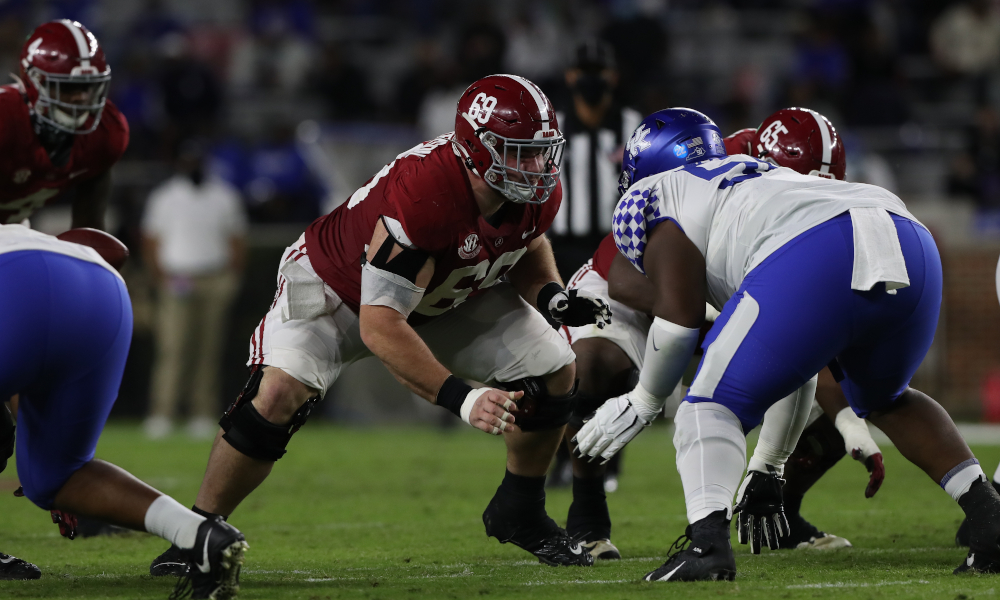 In games like this year’s Iron Bowl, Alabama football is very happy to have Landon Dickerson.

He has only been with the Crimson Tide for two years, but carries similar traits of linemen that were three and four-year lettermen for the program. A native of Hickory, N.C., Dickerson chose to transfer from Florida State to Alabama last summer after finishing his degree.

He earned the starting job at right guard and played four games; however, his move to center is what elevated the performance of the Tide’s offensive line. Through 13 games in 2019, he started nine at center and was dominant.

RELATED: Mac Jones was once an adorable child model before a Heisman candidate

He could have turned professional after the year ended, but Dickerson chose to return to school.

With this decision, he has become one of the more decorative linemen of the Nick Saban era.

The 6-foot-6, 325-pounder brings much leadership, grit and versatility to the unit.

He is a businessman in front of the media, and savage beast in the trench during games.

Dickerson has guided a balanced Alabama offense to an undefeated season (7-0) and an opportunity to push toward a national championship.

When it comes to his personality, Dickerson loves to have fun yet a switch is flipped once he’s on the field.

Barrett Jones is one versatile player that comes to mind, when one discusses linemen who galvanized the team for championship runs at Alabama. After redshirting his freshman year in 2008, he started at right guard for the first national title squad under Saban in 2009.

He switched to left tackle in 2011 and helped a Heisman finalist in Trent Richardson. That season, Jones cleared the way for Richardson to set a single-season school record of 1,679 yards rushing and 21 scores on 283 carries. Alabama captured its second BCS title trophy, and then Jones transitioned to center in 2012. Upon taking responsibility of making calls, he blocked for a quarterback that totaled 30 touchdown passes (AJ McCarron) and opened holes for a pair of 1,000-yard rushers.

Because of his leadership, Jones even got into a tussle with McCarron on television at the 2013 BCS National Championship Game versus Notre Dame. The two would hug it out, but it showed the competitive nature of Jones as a leader.

Ryan Kelly did not play multiple positions, but he was a dominant center.

Kelly’s intelligence up front led to Calvin Ridley recording a 1,000-yard campaign (1,045) as a freshman at wide receiver, and it resulted in the Tide winning a national championship and Henry bringing the program its second Heisman winner.

Bradley Bozeman (center) and Jonah Williams (left tackle) were players of leadership in 2017, as both assisted the duo of Jalen Hurts and Tua Tagovailoa to success. Both players navigated Damien Harris to 1,000 yards on the nose with 11 scores, while blocking for three 500-yard rushers. The two propelled Hurts to a strong touchdown to interception ratio, 17-1, and pushed Alabama in to the College Football Playoff National Championship matchup with Georgia. Despite an injury to Williams, Bozeman protected Tagovailoa in the second half and he tossed for three scores — including the game-winner in overtime.

To bring us back to Dickerson, he gives the Tide a certain nastiness it did not have in 2018.

As he continues to make his NFL Draft stock more valuable, his primary goal is to win a national title.

Coach Saban has placed seven offensive linemen in the first round of the draft since 2008, and this includes Andre Smith, James Carpenter, Chance Warmack, D.J. Fluker, Ryan Kelly, Jonah Williams and Jedrick Wills. We can expect for the Tide to place two more in the first-round of next year’s venue, and look for Dickerson to be one of the two.

He has Mac Jones as the frontrunner for this year’s Heisman Trophy, he’s aided Najee Harris to advancing on the all-time school list for running backs, and Dickerson’s protection has led to DeVonta Smith being the primary guy for the Fred Biletnikoff Award. He is looking forward to dominating the Auburn Tigers on Saturday in the annual Iron Bowl.