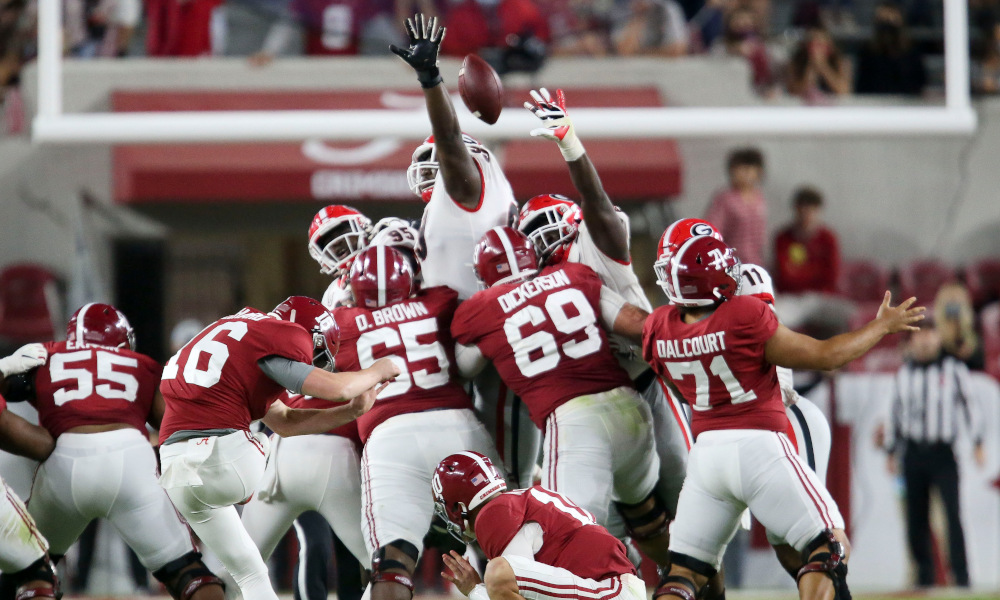 In the spirit of Thanksgiving and with Christmas coming, Alabama football received one of its best gifts in its 2019 freshmen class.

A different feeling comes over Crimson Tide fans on special teams. Normally, there is sense of anxiety, frustration and nerves when the placekicker enters the contest for a field goal. Drinking games, swear words, chanting random statements or walking out of a room were among the coping mechanisms used to not focus on the kicker. For the first time in eight years, Alabama fans have not had to resort to these methods and it feels great. Nick Saban signed a dependable athlete in Will Reichard from Hoover (Ala.) High School and after an injury forced him to miss time last season, he has been special through seven games.

RELATED: Mac Jones is a ‘fantastic leader’ and we are ‘blessed’ to have him as our quarterback, per Alabama teammates

He has been successful with kicks from every angle on the field, including a career-long of 52 yards against Georgia inside Bryant-Denny Stadium. Reichard made two attempts versus the Bulldogs in a 41-24 victory for the Crimson Tide.

Coach Saban referred to him as the ‘best kicker in the country’ on his “Hey Coach” Show last week.

Following the Tide’s 48-17 win over Tennessee, Saban told yours truly of Touchdown Alabama Magazine that it is very ‘comforting’ for an offense to have a reliable kicker. He does not get a lot of opportunities for field goals, due to how dynamic Alabama is on offense, but it does show people the confidence Reichard possesses to make every situation count.

According to Mac Jones, he said Reichard has him ‘hyped up’ to be the holder.

RELATED: Nick Saban is thankful for family, relationships, and ability to help others

“Will does a great job,” Jones said. “I try to calm down and be the middle man for him. He is super even killed, straight-lined guy. He goes out there, hits it through the uprights, goes off the field and celebrates with his teammates. He is the definition of what a good kicker is. The reason he’s a good kicker is he practices really hard at it.”

In terms of kickers, Fletcher has serviced Andy Pappanastos, JK Scott (three attempts in 2017), Joseph Bulovas and Austin Jones since 2017. For him, the native Texan said he has not seen anyone work harder than Reichard at his craft.

“Will Reichard has been an absolute weapon for us as of late,” Fletcher said. “I cannot be any more proud of him. I absolutely love playing with Will. He’s an unbelievable kicker. He works incredibly hard.”

It was tough on Tide fans to see Reichard suffer a hip injury in 2019. Alabama tried to rush him back for the Tennessee game, but he ended up hurting himself again. After being able to rest, he has returned stronger and gives the Tide its final piece in becoming a complete team. The best thing about Reichard is the high confidence he has within himself at his job.

“He works harder than anyone,” Fletcher said of Reichard. “He loves to kick. He loves to workout. He is an elite kicker and he gives us an opportunity to win games. When you have a specialist that can do that, it is very few and far in between that you find a guy like Will Reichard. We could not be more blessed to have him.”

RELATED: Thomas Fletcher is the true definition of an unsung hero

If this year’s Iron Bowl comes down to a field goal, Alabama is more confident now than ever.

With a trained leg that is ready to deliver, Reichard is prepared for this week versus Auburn.