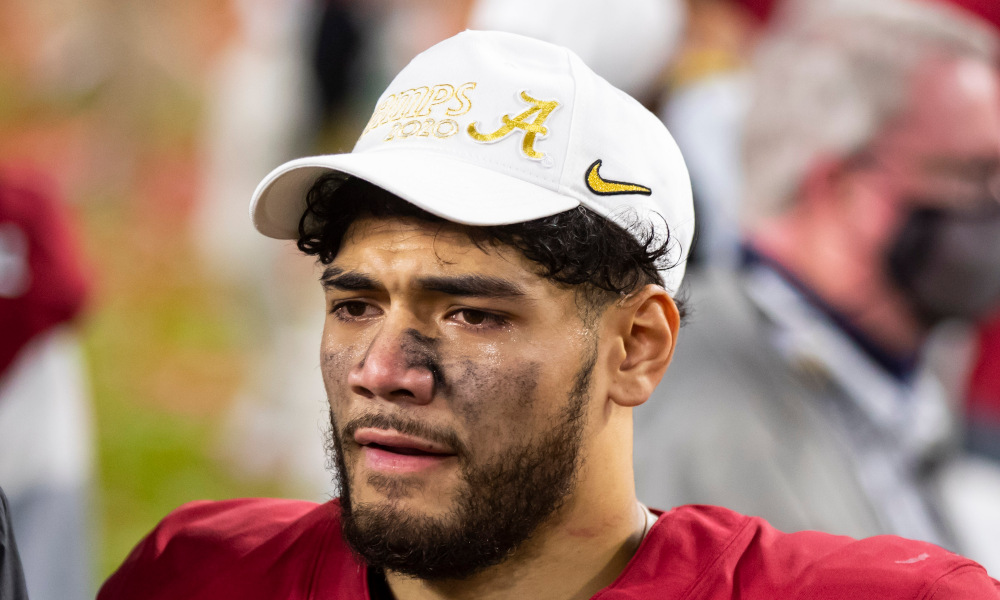 The idea of Alabama possibly having Henry To’o To’o for next season is heating up.

According to his Twitter, Brandon “Ale” Kaho announced he was entering his name into the NCAA transfer portal. A senior from Nevada, Kaho flipped his commitment from Washington to the Crimson Tide in the 2018 recruiting class.

He propelled Alabama to having a top-five class nationally and showed much promise on special teams. Kaho was a force on kickoff and punt coverage, especially with his knack for blocking punts. He also doubled as a fullback in goal-line situations, leading Najee Harris and Brian Robinson into the end zone. Kaho did not materialize into being a marquee inside linebacker at Alabama, but fans wish him well.

With Kaho in the portal, is this Nick Saban’s way of preparing for To’o To’o?

Some believe it is. Kaho joins Ben Davis as the second linebacker to enter the portal.

He totaled three tackles in two meetings versus the Tide, but To’o To’o has been dominant in the Southeastern Conference.

During his two seasons at the University of Tennessee, he has played in 23 games (22 starts) at weakside “Will” linebacker. To’o To’o made the Freshman All-SEC and Freshman All-American team in 2019, after posting 72 tackles, five tackles for loss, two pass breakups, three quarterback hurries, and one fumble recovery. His output for tackles was second for freshmen in the SEC and fourth among freshmen in the NCAA.

Last year, he led the Volunteers for tackles (76) and tackles for loss (10). To’o To’o was on the preseason watch list for the Butkus, Bednarik, and Nagurski awards. After not getting him in the 2019 recruiting cycle, it would be an opportunity for Nick Saban to shore up his defense — especially at linebacker — if the Tide gets To’o To’o out of the portal. If anything, it would provide Christian Harris with a chance to slide inside and be the middle linebacker. He has two years of experience in Pete Golding’s system and would thrive as a signal-caller on the field.

Listed at 6-foot-2 and 225 pounds, To’o To’o has the quickness and instincts to play beside Harris.

Should To’o To’o not be the option, the Tide has Jaylen Moody, Shane Lee, Demouy Kennedy, Jackson Bratton, Deontae Lawson, and Ian Jackson. The quartet of Kennedy, Bratton, Lawson, and Jackson are all quality in-state talents.

Aside from Dont’a Hightower and Dylan Moses, the excellence at middle linebacker came from in-state players.

Rolando McClain, C.J. Mosley, Reggie Ragland, Shaun Dion Hamilton, and Rashaan Evans all won national championships at middle linebacker, and all hail from the state of Alabama. Reuben Foster, an alumnus of Auburn (Ala.) High School, nearly captured a national title in 2016 at middle linebacker. His attempt came up short; nevertheless, he was still dominant.

Alabama could be looking at Kennedy, Bratton, Lawson, or Jackson to carry it forward.

It will be intriguing to see what happens, but To’o To’o to Alabama is starting to become a legitimate idea.