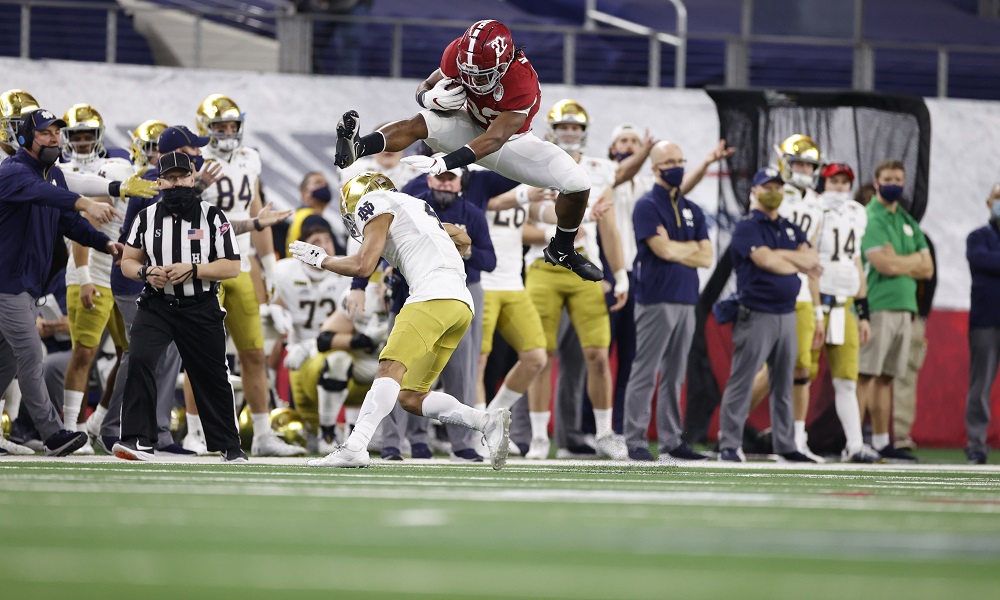 Whether they want to admit it or not, running backs are always looking for ways to eliminate unnecessary hits especially when entering the NFL. With the average career spanning just three seasons, keeping yourself healthy is the easiest way to elongate your time in the pros.

Backs have run out of bounds, slid or dove, but Alabama running back Najee Harris has mastered a different tactic.

Although he’d been doing it with the Crimson Tide since his first two seasons, it was his impressive run against South Carolina during the 2019 season which made it a national conversation. Breaking through a weak tackle then shooting up six feet in the air and galloping into the endzone was just the beginning of an impressive highlight reel.

But how did he even begin to consider clearing sprinting human beings as easily as walking into his home? Harris hilariously gave his explanation on Wednesday during an appearance on The Pat McAfee Show.

"You know what it is truthfully… I'm tired of getting hit in my damn legs! I'm like damn this shit hurt" #RollTide RB @ohthatsNajee22 on hurdling folks on the field #PatMcAfeeShowLIVE pic.twitter.com/LEJbZz0Sk2

“Man, you know what it is, truthfully? It’s me getting — I’m tired of getting hit in my damn legs. So, I’m like, ‘(expletive), this (expletive) hurt. I’m about to start jumping,’” Harris said. “One play that it was like — it was just pure like instinct, was the Notre Dame one. I turned the corner, I didn’t really see him and I felt like — I’m a bigger back, so I felt like, ‘alright, he’s about to come for my legs.’ But it didn’t work out like that.”

Before the 2019 season, Harris mentioned his want to cut back on the hurdles, but it has only become more of a weekly expectation. Even head coach Nick Saban, who also wanted the hurdles to be eliminated, eventually gave in after Harris’ 2020 season where he ran for 1,466 yards, 26 touchdowns and an unbelievable hurdle during the Rose Bowl against Notre Dame.

“I actually tried to teach him not to do it, and it didn’t work,” Saban said during his postgame press conference. “For a big guy, it’s pretty amazing he can do that.”