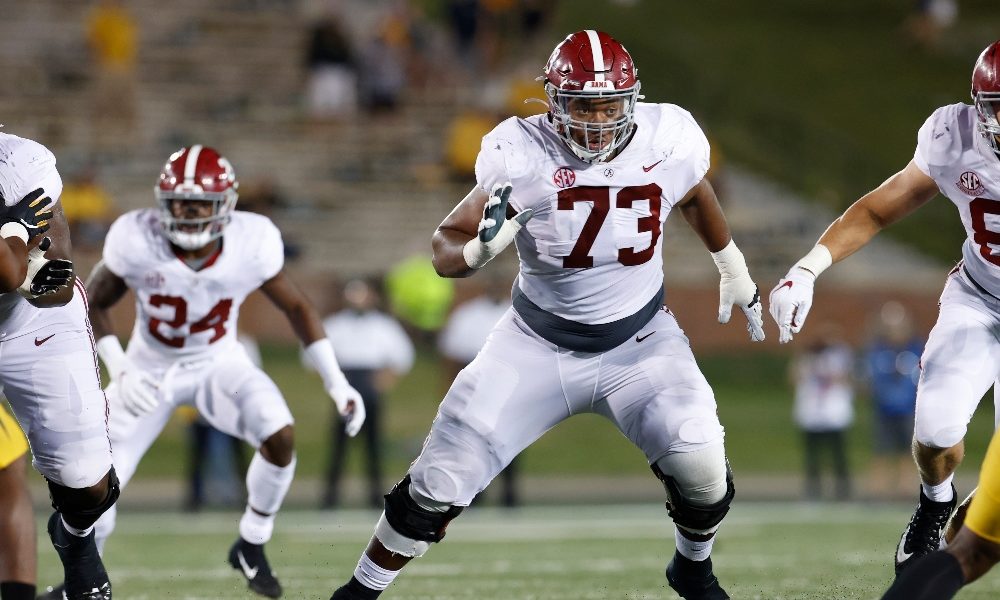 As we begin the offense, the next profile piece is Evan Neal.

When looking at Evan Neal as a whole, there isn’t too much not to like. The now Junior has started every game he’s been at Alabama since he first arrived in 2019. He’s been a part of two record-breaking offenses at Alabama and has played a big part in its success.

What’s been really impressive in Neal’s career has been his ability to be a swiss army knife along the offensive line. He played offensive guard his first season with the Crimson Tide and following a solid year he was kicked out to right tackle in 2020, his natural position, where he once again dominated opposing defenses.

In 2021 he will likely be asked to move once again but this time over to left tackle to protect the quarterback’s blindside.

In the passing game Neal hasn’t shown any cause for concern and whoever the quarterback is should feel safe with the 6-7 monster in front of him.

Last season Neal was credited with allowing just 1.5 sacks in the 13 game season and in 810 total snaps he missed only six assignments. He’s squared away in terms of the playbook and his technique as he only had three penalties throughout the year.

But he isn’t just a tremendous pass blocked, but he is a main fixture in Alabama’s run game. He helped running back Najee Harris rush for 26 touchdowns and have Alabama average 5.0 yards per carry as a team.

An area he does need to work on, like most tall offensive lineman is his pad-level when run blocking. It’s not out of the ordinary for someone this tall to get caught a little bit high in these situations which allows the defender to get in him and push him off the line just enough to make a play.

It hasn’t been a glaring issue in Neal’s game but if there was anything he has to truly work on it’s that.

For lineman Neal’s size, one would think that overall athleticism would be an area of concern, but Neal isn’t like most. He is a freak of nature when it comes to explosion and flexibility which was highlighted in a video last year where he showed off his impressive coordination.

Now that Neal is expected to move over to the money-making position, he will have the chance to show NFL scouts exactly what teams will be getting in next years draft as he expects to be one of the top lineman while finishing his Alabama career off the right way.