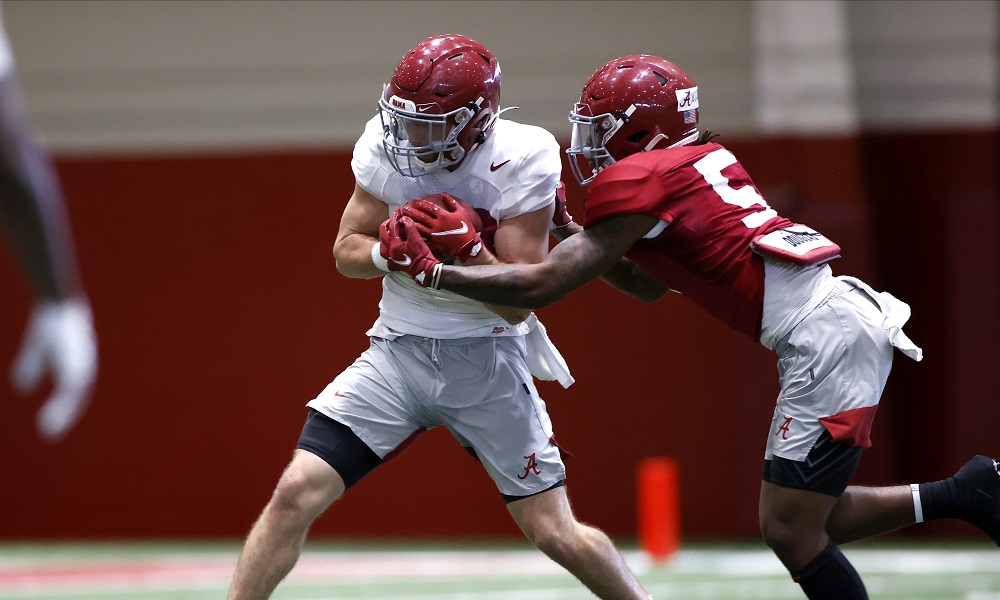 He has big shoes to fill in the absence of Steve Sarkisian, but Bill O’Brien is capable of operating as an offensive play-caller at the University of Alabama.

After spending time at Penn State University and the National Football League, the 51-year-old will take to Bryant-Denny Stadium for his first scrimmage of spring practice. O’Brien has coached a lot of talented receivers and tight ends; however, this opportunity presents him with a chance to transform a solid group into a special one. Slade Bolden, a redshirt junior, spoke to local reporters via Zoom on Thursday.

A native of West Monroe, La., he saw his role increase at wide receiver last season.

Bolden caught 24 passes for 270 yards, including his first career touchdown catch versus Ohio State in the College Football Playoff National Championship Game. He returns as a veteran in the receiver room, and he has been compared to Julian Edelman of the New England Patriots since his arrival in 2018. Bolden played quarterback, receiver, and defensive back in high school, but he has made the transition to receiver. He told the media that O’Brien is going to use him like Edelman and Wes Welker.

“Before we got to offseason and getting him [Bill O’Brien] situated with the playbook, he mentioned some things like that,” Bolden said. “He does see a little of those skill sets with me. So, there are some attributes he can put in the offense that will help with my skill set. It will help me be able to get open with different routes.”

Alabama has a new offensive coordinator, but Bolden said the system does not change.

Holmon Wiggins is in his third season as the Crimson Tide’s wide receivers’ coach. He was hired to the Tide in 2019 after three years at Virginia Tech (2016-18) and four seasons at Memphis (2012-15). Bolden is in his third year with Wiggins, so there are no alterations in the concepts for him.

Wes Welker, a former 12-year veteran in the NFL, invented the option route.

The blueprint O’Brien had for Welker also worked for Edelman too.

Bolden has the capability to have massive success in O’Brien’s offense. He is building chemistry with Bryce Young and Paul Tyson, and this is setting up to be a strong year for him.

Hopefully, Bolden can build up his speed in the role to be a home run hitter on plays. If he can do that, he will hold off Christian Leary and provide Alabama with an element to offset defenses.