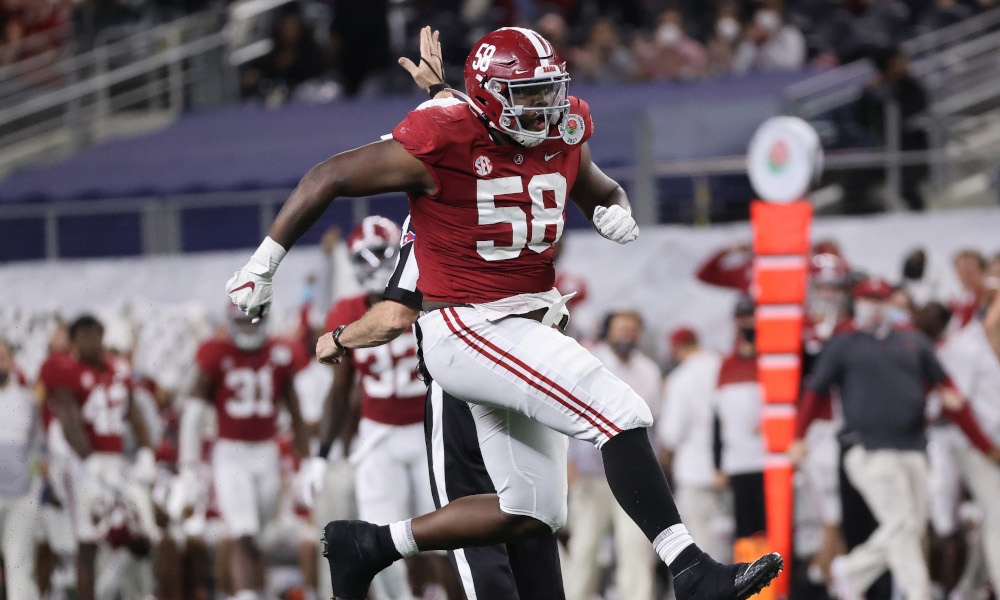 This year’s defensive line group is not particularly strong entering the NFL Draft; however, Christian Barmore stands as the best prospect in the class.

A native of Philadelphia, Pa., the former University of Alabama standout was dominant last season. He missed the season opener versus Missouri, but Barmore’s first sack came against Georgia. The 6-foot-4, 310-pounder became unstoppable during the last seven matchups of the year, collecting sacks versus Kentucky, Auburn, Arkansas, LSU, Notre Dame, and Ohio State.

RELATED: Tua Tagovailoa is ‘going to take the next step,’ according to Dolphins’ GM Chris Grier

Barmore posted two sacks against the Razorbacks and was the Defensive Most Valuable Player for his performance in the College Football Playoff National Championship versus the Buckeyes. He turned in five tackles, including two for loss in Alabama’s 52-24 victory over Ohio State. Barmore led the Tide in sacks (eight) and totaled 9.5 tackles for loss with six quarterback hurries, three pass breakups, and three forced fumbles. He posted a 40-time between 4.89 and 4.95 seconds at Alabama’s Pro Day.

Despite his accomplishments, one NFL Draft expert sees him as a second-rounder for next week’s NFL Draft.

.@MoveTheSticks on Christian Barmore: Likely 2nd rounder, could sneak in end of R1.
He’s a 3-tech with a lot of athleticism to get upfield and attack.

According to Daniel Jeremiah of NFL.com, he has Barmore in the second round. The former four-star could sneak late into the first-round, but it will depend on who needs an interior or edge rusher. The New York Giants have the 11th overall pick, and it has the “EDGE” position listed as one of its biggest needs. New York finished with 40 sacks in 2020, which made it a middle-of-the-pack team. As for the Tennessee Titans, it has the 22nd overall pick. Tennessee finished 30th for sacks with 19 last year.

In two seasons, Barmore had 10 sacks, 15.5 tackles for loss, and 11 quarterback pressures.

He showed in 2020 that he is a first-round talent.

It will be interesting to see where he falls in the draft.