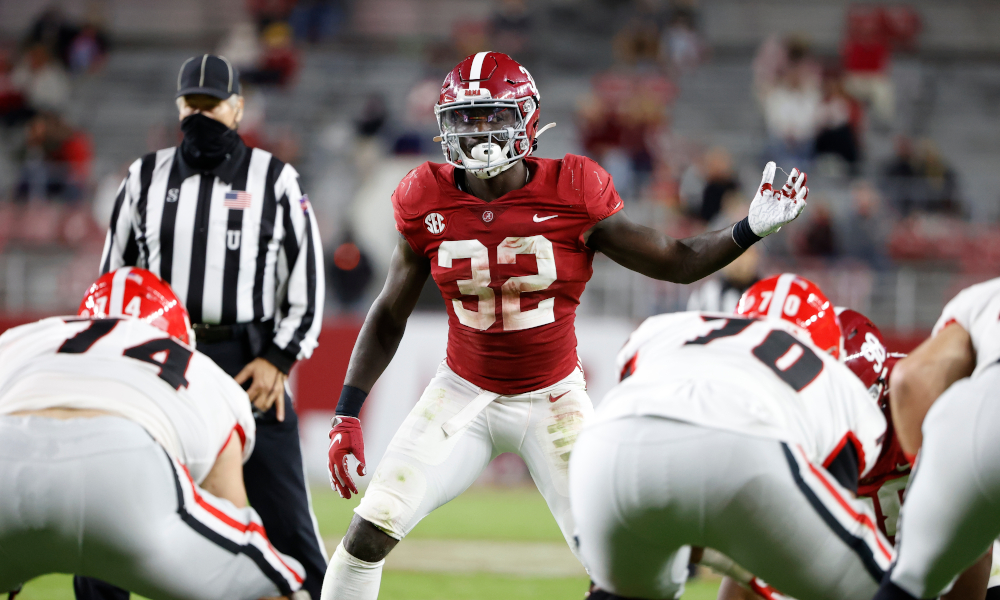 The state of Louisiana and playing football for Nick Saban taught Dylan Moses how to endure trials.

He faced some unpleasant challenges in 2019 and 2020 that could have derailed his career.

Moses suffered two serious knee injuries and lost his grandmother to COVID-19, but he kept fighting. He did not have the explosiveness from his freshman and sophomore seasons; however, he still made an impact. The 6-foot-3, 240-pounder led Alabama football for total tackles (80) and recorded 6.5 tackles for loss, 1.5 sacks, three pass breakups, one forced fumble, and one interception. His leadership at middle linebacker helped the Crimson Tide go undefeated in an SEC-only schedule. He assisted Alabama in winning the Rose Bowl and capturing its sixth national championship of the Saban era.

He is a two-time national champion, but where will Moses fall in the NFL Draft?

Before the injuries, he was projected as an early first-round selection. Now, his value starts in the third round.

A team could take him in the second round if there is a need. He tore his anterior cruciate ligament (ACL) before the 2019 season started and missed the year. Moses would then play all of last season on a torn meniscus. He has been rehabbing since the end of the 2020 campaign, but a video has surfaced on Twitter of him back on the field. The video came from ESPN’s Matt Miller, who is an ESPN NFL Draft analyst and founder of The Draft Scout. Moses does bring a skill set of stopping the run but needs to improve in coverage.

Alabama linebacker Dylan Moses is back on the field after a torn meniscus. Projection is that he’ll be healthy and ready for training camp. pic.twitter.com/pmOeGSH7bf

During Alabama’s second pro day, he said he’s met with a few NFL teams — including the New Orleans Saints.

RELATED: Kendrick Blackshire getting bigger for his freshman season at Alabama

Crimson Tide fans want to see Moses have success, so hopefully, he lands in a good spot.