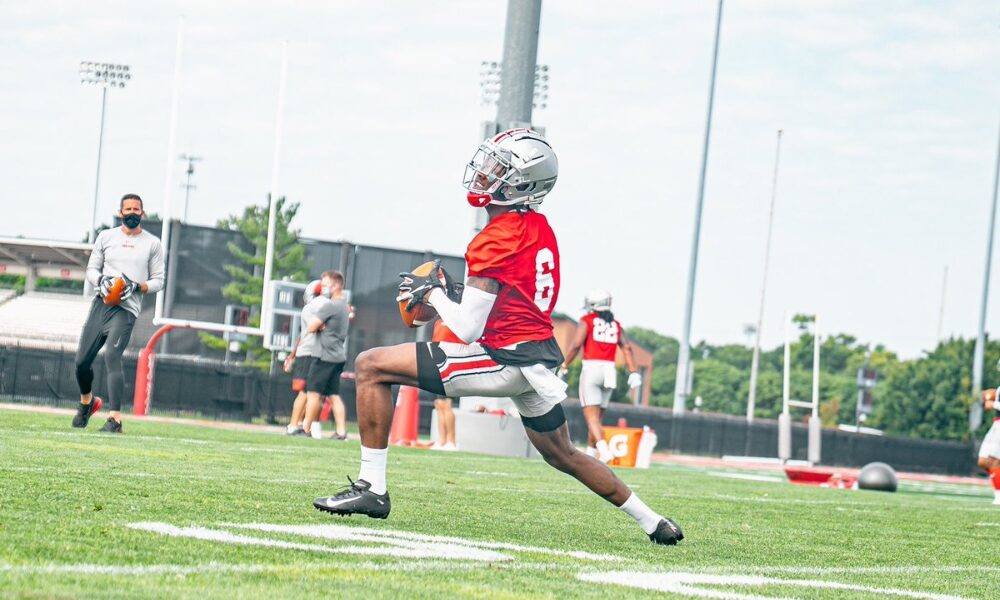 Alabama nabbed another talented playmaker from a Power 5 opponent on Monday as Ohio State wide receiver Jameson Williams announced online that he would be transferring to the Crimson Tide.

With a room that is already jam-packed with talent, Williams brings along a unique set of skills that will add to Bill O’Brien’s offense.

The first thing that catches your eye when watching the Missouri native is his speed. Although he only had nine receptions it was his game against Clemson which best demonstrated his abilities as a receiver. He caught three passes for 68 yards which included a 45-yard touchdown reception where he sped past two Clemson defensive backs down the heart of the defense.

The Crimson Tide have valued speed on the outside for the better part of the decade with players like Henry Ruggs and most recently Jaylen Waddle and DeVonta Smith.

With Smith and Waddle moving onto the NFL, the offense could be looking for that big-play ability and Williams could be best equipped to give that to them.

What should also be noted is William’s impact on special teams. Even though he was a consistent player on offense he contributed to Ohio State’s punt team and was able to make some plays.

At the very least head coach, Nick Saban will be able to utilize his speed in some way shape, or form.

But what is an underrated part of William’s game is his body control on the sidelines and his ability to break tackles.

In his limited touches in 2020, there were flashes of a well-rounded outside receiver as a couple of his catches required him to contort his body or come back the football while remaining in bounds and keeping possession.

A few grabs also showed his toughness and grit to break tackles and pick up extra yards when necessary.

Whether the transfer works out or not, William’s presence alone will create more competition with the young receivers on the roster. Players like Agiye Hall, Traeshon Holden and Christian Leary who all battled for playing time in the spring may not be done earning their roles.

If Saban has proved anything over the course of his career in Tuscaloosa it’s that talent rises to the top of the depth chart and there will always be heavy competition on the roster.