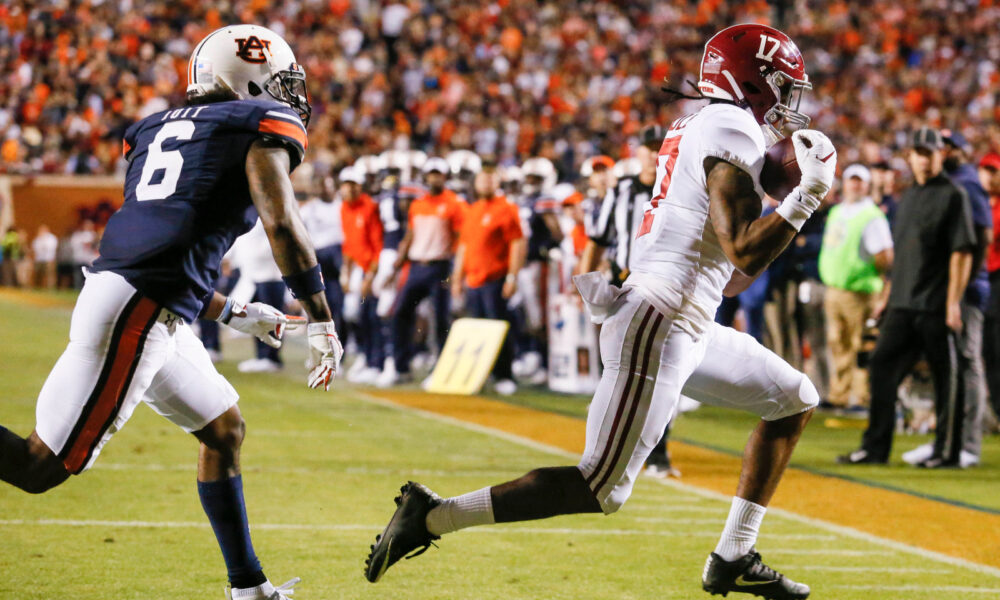 We learn something new every day, especially when it comes to Alabama football. Before he was selected at No. 6 overall in the NFL Draft by the Miami Dolphins, Jaylen Waddle played three years for the Crimson Tide. He was the most electrifying wide receiver in college football.

Whether he was catching passes, returning punts, or returning kickoffs, he was must-see television.

A native of Houston, Texas, Waddle provided Tide fans with memories they will never forget.

He ended his career with 20 total touchdowns; however, we never received the correct pronunciation of his last name. In saying “Waddle,” as if it rhymed with coddle, all he would do was smile in player interviews.

He never corrected reporters, so we took it for what it was.

Nick Saban approached the media all the time, and he said Waddle’s name like we’ve all said it.

However, we must proceed with the right way of doing things when it comes.

According to a video from Overtime, Waddle’s two older sisters said his name is pronounced like Adele. He was featured on Draft House, which was a mini-documentary series sponsored by Rocket Mortgage. During the pre-draft process, Waddle took fans inside his preparation for Alabama’s pro day, the NFL Draft, and he went to Houston to reminisce on his childhood.

Regardless of the minor issue, Alabama fans were just happy he played in Tuscaloosa.

The ones who were at Bryant-Denny Stadium got to see someone in the same category as David “Deuce” Palmer.

*Jaylen Waddle’s sisters say the correct pronunciation of his last name at the 7:07 mark of the video

As long as his name is pronounced and spelled correctly on his NFL checks, that is all that matters.