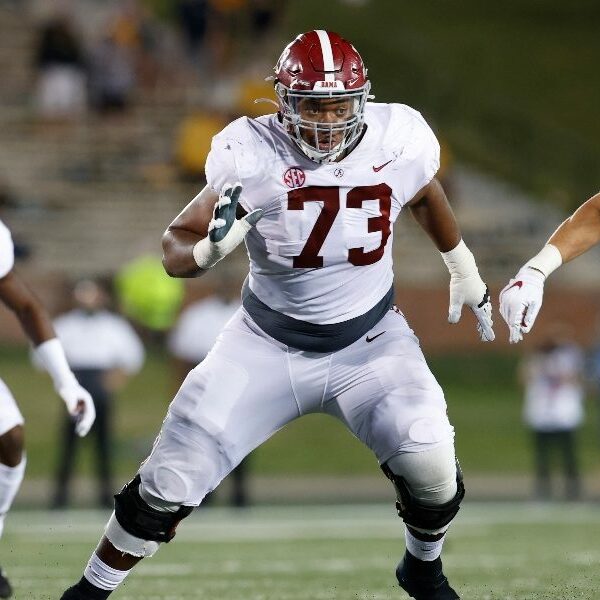 Daniel Jeremiah has started breaking down prospects for the 2022 NFL Draft.

As a former college quarterback and pro scout, Jeremiah is an analyst for NFL Network and one of the top draft evaluators in the business.

After watching six players from the University of Alabama get selected in the first round in April, he is looking at Evan Neal for next year.

The 6-foot-7, 360-pounder is projected to be taken early in the first round as he enters his junior season.

Neal, a native Floridian, looks to be the seventh first-rounder at offensive tackle in the Nick Saban era. Since 2009, names such as Andre Smith, James Carpenter, D.J. Fluker, Jonah Williams, Jedrick Wills, and Alex Leatherwood were all first-round picks.

Neal’s impressive size and his ability to finish plays stand out. When he has control of an edge rusher on the defensive line or speed rushers at the second level, they cannot separate from him.

This bodes the same for rushing plays as well.

Despite his frame, the former five-star is light on his feet and is aggressive. However, there are moments where his physicality slows him down.

His feet get stuck at times and it allows speed rushers to get around him and sack the quarterback.

Jeremiah could not find a current comparison for Neal, so he chose Marcus McNeil.

A former standout at Auburn, McNeil was taken in the second round (No. 50 overall) in the 2006 NFL Draft. He played six seasons with the San Diego Chargers (now Los Angeles Chargers) and was selected to two Pro Bowls. McNeil was massive in size too at 6-foot-8 and 336 pounds. Neal is ready to anchor an offensive unit to another Joe Moore Award. He wants to win a second national championship, and become the next first-round selection. Jeremiah will be watching a lot of Neal in the coming fall.