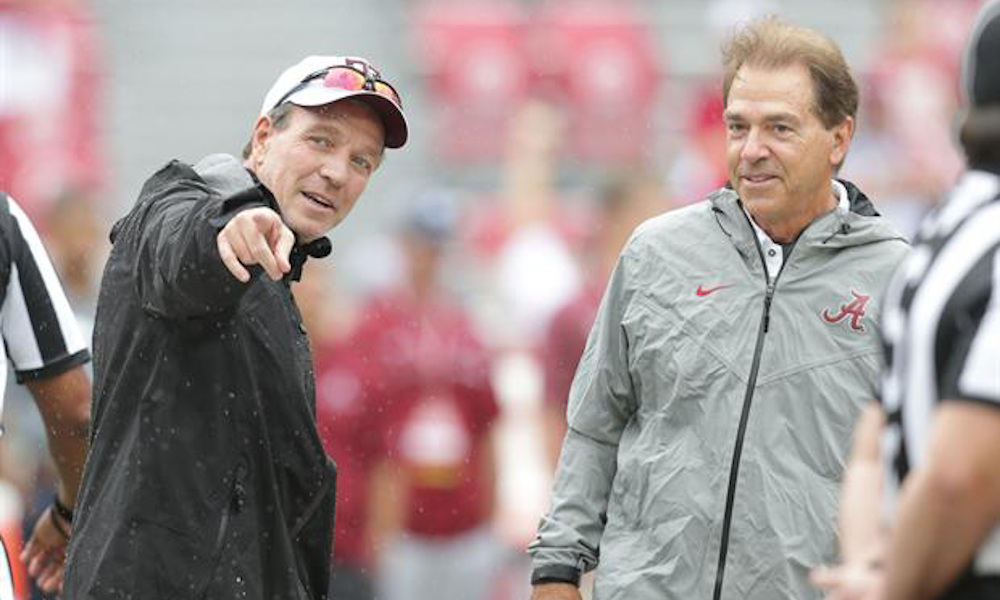 During Texas A&M’s interview period of SEC Media Days head coach Jimbo Fisher was unsurprisingly asked about the comments he made about beating Alabama and Nick Saban when giving a speech at the Houston Touchdown Club back in May.

“We’re gonna beat his ass when he’s there, don’t you worry,” Fished said to the boosters.

On Wednesday, Fished didn’t back track his comments at all. In fact he doubled down and showed no regrets.

“I don’t have any regrets,” Fisher said. “That’s what we’re here for, isn’t it? Isn’t that why everybody’s here? That’s what makes this league this league. That’s what we expect to do at Texas A&M. In saying all that — Nick and I are friends. We’ve known each other a long time. We coached together. We’re from the same world, if that makes any sense. I have the utmost respect for what he’s done and what he’s accomplished. He’s the standard, and the standard is what you have to play to.”

Fisher later stated that he has a ton of respect for Saban who he coached under while he was at LSU, and that the Aggies still have a lot of work ahead of them if they want to take out the defending champs.

“It’s our standard,” Fisher said. “It’s what we’re in the business to do. It’s the same thing, too. I love our football team. Sometimes it’s important to be good, and it’s important for them to know I think they’re good, which I do. I think we have a chance to be a very good football team.

“Now, me saying it and us wanting it is one thing. Wanting to win doesn’t matter. Are you prepared to win? How we prepare, how we practice, the amount of detail we have, and how we go about things, and the camaraderie and the chemistry and the culture we created, does it continue, and does it continue to grow and even get better?