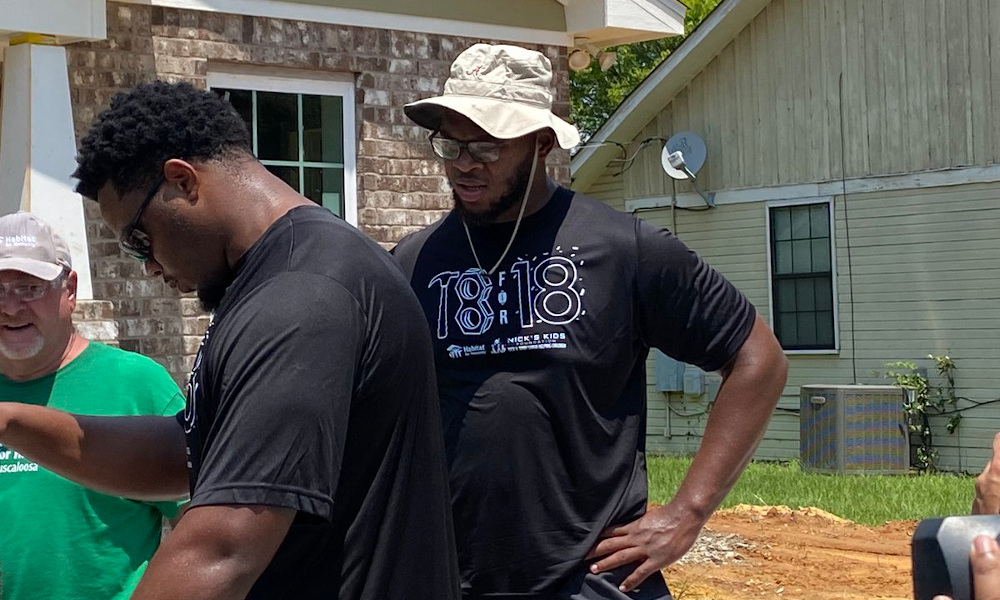 Nick Saban has consistently shown he is more than a football coach.

He is a father figure, a mentor, a friend, a motivator, and someone who has made the Tuscaloosa community special.

Before he enters his 15th season at the University of Alabama, Saban and 12 players brought a smile to one woman’s face on Tuesday at the Nick’s Kids Foundation in Habitat for Humanity. With each national championship, Saban, Mrs. Terry, and the players build a home for someone else. It ties back into the legacy of Saban’s father, Nick Saban Sr., who wanted to see everyone in his community of West Virginia succeed. According to Saban, Mrs. Terry wanted the 18th national title in 2020 and the home for Joselyn Hamner is beautiful. The athletes who assisted in this experience include Jordan Battle, DJ Dale, Shane Lee, Phidarian Mathis, John Metchie, Evan Neal, Chris Owens, Kendall Randolph, Brian Robinson Jr., Major Tennison, Henry To’oto’o, and Daniel Wright.

The 18th home that Nick Saban, Terry Saban, and Alabama football has provided a family in Habitat for Humanity in Tuscaloosa.@TDAlabamaMag pic.twitter.com/BU0Ef9RdOE

Alabama’s Evan Neal is a preseason candidate for the Outland Trophy, but today he’s giving back to Tuscaloosa in participating in the 18th home that Nick’s Kids has done for Habitat for Humanity.

Kendall Randolph is with him in the photo. pic.twitter.com/254r5toELG

Coach Saban said the team was ‘very excited’ about this experience.

“We’re excited about helping some family be able to have a better quality of life because of what we’ve been able to do in partnering with Habitat to build these houses for them,” he said.” This is something that’s special for myself and Miss Terry, and we certainly thank all the people out there who do that.”

When she saw the home, Hamner was overjoyed.

“I’m so thankful,” Hamner told reporters. “I want to thank Coach Saban and Miss Terry and the Nick’s Kids Foundation for everything. It really, truly is a blessing. I’m just thankful for all this, I really am. Them taking their time out to do all this, it really is a blessing.”

As a Tuscaloosa native, Brian Robinson understands the importance of loving his community. He was a star running back at Hillcrest High School before signing in the Crimson Tide’s 2017 class. The redshirt senior looks to increase his draft value in his final season at Alabama; however, he cherishes the opportunity to bless another individual.

When a fearsome tornado hit Tuscaloosa on April 27, 2011, Saban challenged his players to help those in need. The bonding experience it created allowed for the Tide to win back-to-back national titles in 2011 and 2012.

Saban knows the more a team bonds off the field, the stronger it becomes on it.

“I think anytime the team does something together as a group, other than what they do in football, that’s always a good thing,” he said. “Whether they go bowling together or do something like this, I think all those things are really good in terms of how it develops the respect and togetherness for the individuals on the team.”

Saban also took thoughts on the Texas/Oklahoma situation. Both schools have informed Big 12 officials they will not renew their rights after 2025. Texas and Oklahoma have expressed interest to join the Southeastern Conference, but when will it happen?

“I don’t really know enough about it,” he said. “I know that the conference commissioner and the people that are above me administratively and organizationally, the college presidents or whatever, need to make decisions like this as to how it benefits our conference and how it affects college football as a whole. I don’t really know that I have an answer to that.”