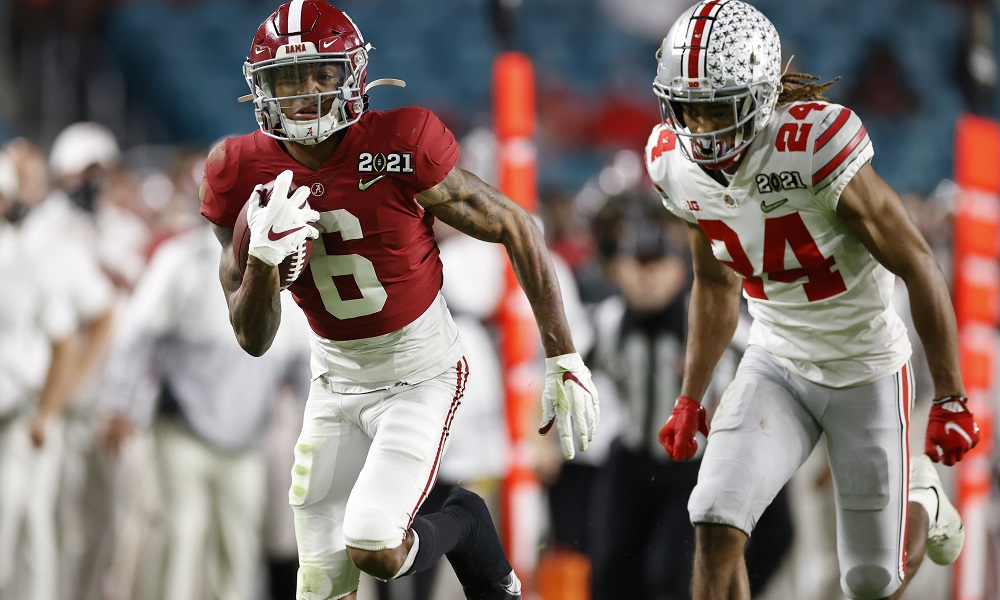 The No. 10 overall pick of this year’s NFL Draft was having a great first week of training camp until an injury happened.

According to Jeff Skversky, a sportscaster for ABC Channel 6, Smith reportedly suffered a minor leg injury. He was evaluated; however, it appears to be nothing serious. Philadelphia drafted the Louisiana native to help grow Jalen Hurts as a second-year quarterback. During three practices, Smith totaled seven receptions (10 targets) for three touchdowns and suffered no drops.

Eagles coach Nick Sirianni on DeVonta Smith prior to his leg injury tonight:

“he’s worked at his game, he’s worked on his craft… his fundamentals are really polished for a young player” https://t.co/HGrWb3AVMo pic.twitter.com/UCsdDOKSrw

“I give so much credit to DeVonta and his fundamentals,” Sirianni said after one practice. “He has worked at his game. He’s worked at his craft, and I give so much credit to the coaches at Alabama for improving his game. That is how a player gets better. We have these guys that are world-class athletes, but if you combine athleticism with fundamentals then the sky is the limit for them. That is what I see in DeVonta. His fundamentals are really polished for a young player. A lot of credit to him.”

Smith’s attitude as a perfectionist allowed him to become Alabama’s all-time leading receiver.

It allowed him to become the first receiver in school history to win the Heisman Memorial Trophy. He dominated the best defensive secondaries in college football, and it propelled him to a national championship.

Smith has his sights on being the NFL’s Offensive Rookie of the Year. He’s quickly becoming the best target on the Eagles’ roster.