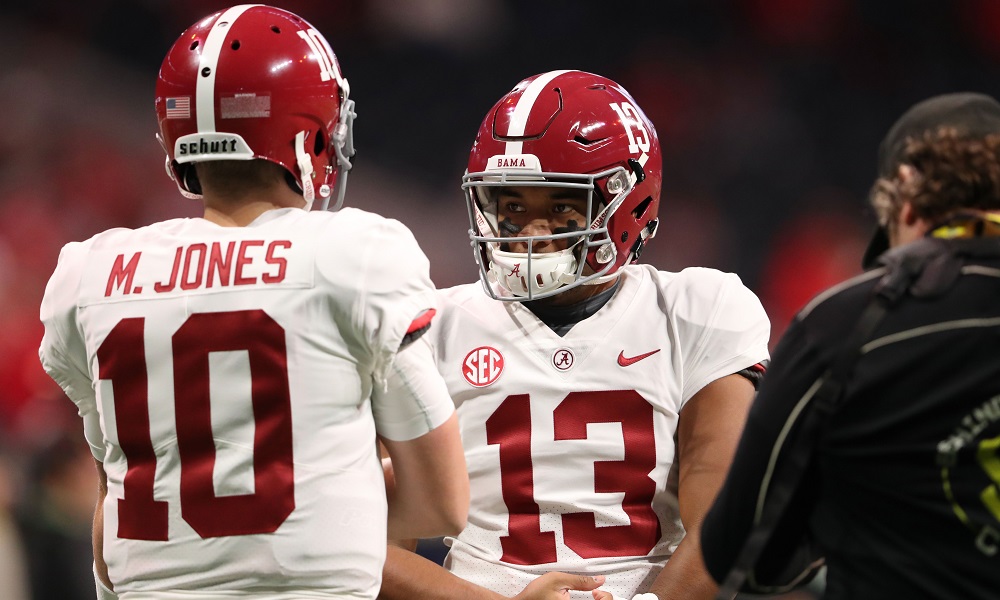 Not only will this weekend be a major weekend for the Alabama Crimson Tide who will be playing it’s home-opener with a maximum capacity stadium, but its former athletes in the NFL will be making big headlines as well.

On Sunday the Miami Dolphins and New England Patriots will meet with both teams starting former quarterbacks of the Crimson Tide. Tua Tagovailoa is entering his second year with the Dolphins after going 6-3 as a starter in 2020, and Mac Jones will lead the Patriots after beating out 2020 starter Cam Newton in training camp.

Their former head coach Nick Saban typically never picks sides whenever his former players face each other on Sundays, nor does he often get a chance to watch. But Saban is rooting for both of their individual successes.

“Both guys are great guys, both guys did a great job for us here, we’re rooting for both guys,” Saban said. “I hope both guys play extremely well. They are very capable. Tua had his year last year to play and develop and learn and grow and Mac is in that situation now. I wish them both very well, I hope they both do extremely well both in this game and in their careers.

Tagovailoa and Jones are two of the most decorated quarterbacks in Crimson Tide history as the two combine for multiple individual awards, Heisman finalists and both have won national championships.

Alabama has consistently shipped loads of talent to the NFL since Saban joined the program which is something the seven time champion is very proud. Even though he’s focused on his current team, Saban says that Alabama sends out nearly 70 text messages to players who are about to take the field.

“I usually am focused on what out team is doing,” Saban said. “I think that we text all 70 players in the NFL and let them know that out thoughts and prayers are with them and we wish them good luck. But we have so many players in the NFL, I don’t really reach out to individuals and have a message for them. We do send them a little good luck thing. But we’re always watching.

“We’re always hoping that they do well. We love it when our guys come back. We had probably 10, 12, 15 guys one the sidelines this last game in Atlanta that were all guys that were successful in the program here and having successful NFL careers.

“We’re always anxious to see how they do. I always read a report every week to see how each player did. Sunday’s a big work day for us so we don’t get to see the players play that much. I certainly wish I could. But we have a team here, and I think the players all respect the fact that they have a lot of pride in Alabama. I was in the NFL and I know how much trash gets talked on Saturday night about whose team did what, so I know those guys want our team to do well, too. And I think they know that I’m pretty much committed to that.”

Jones and Patriots kickoff against Tagovailoa and the Dolphins on Sunday, Sept. 12, at 3:25 pm CT.