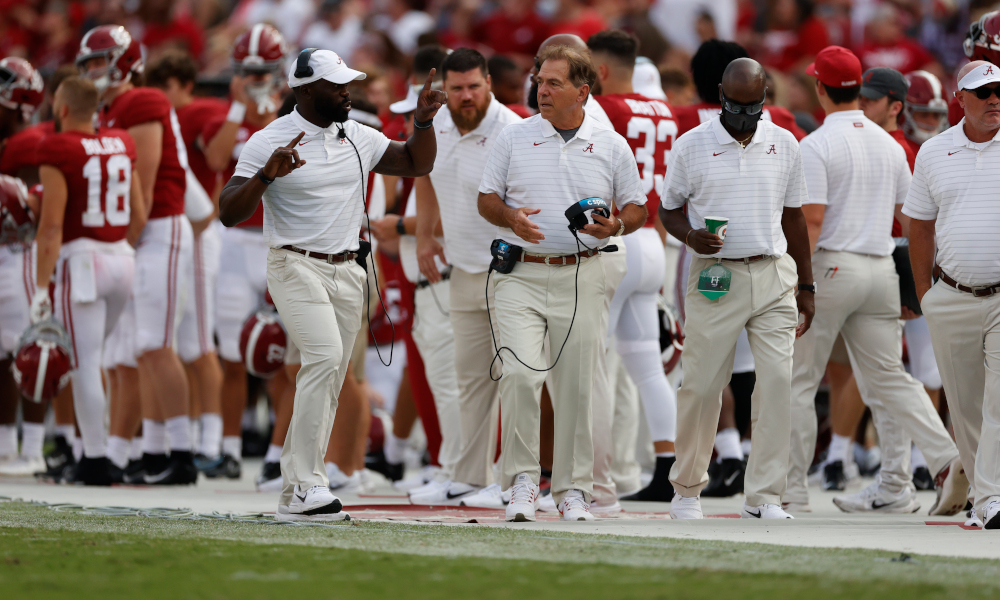 Alabama football earned a 48-14 victory in its home opener against Mercer; however, Nick Saban was frustrated with a few things.

Despite beating Miami to open the season, the Crimson Tide did not practice well before Saturday’s game versus the Bears.

Saban expressed his frustrations in Wednesday’s presser, and people saw why he was upset. Alabama’s offense struggled in the first quarter, especially the offensive line.

Mercer got pressure on Bryce Young and got two sacks. The first touchdown for the Tide came on a blocked punt that Jase McClellan returned 33 yards for the score. Young tossed three touchdowns, but he also suffered dropped passes. Alabama converted only five third downs on 13 attempts. When the offensive issues were not bothering him, penalties had Saban losing it on the sideline. The cameras stayed on him going irate on the sideline after each mistake.

The Tide had nine penalties for 95 yards, and it led to Mercer’s 14 points.

Every move Saban makes is calculated. He returned to his “Rat Poison” message, and now the players understand why he did it. Alabama will have a difficult meeting with Florida to open Southeastern Conference play next week, but it has to get some things cleaned up.

He grew up in a home that demanded excellence, and Saban will be on players next week.

“Maybe we need more of this,” he said after the game. “When I was growing up, I worked for my dad, aight. So every day at dinner, he would [slam the table]. There was a reckoning — a reckoning — for everything you were supposed to do that day.”

He stated that he was not upset with reporters, but Alabama’s penalties were ridiculous.

Saban knows the Tide cannot afford to be flat against the Gators. Practice will be rough as Alabama gets set for conference action.