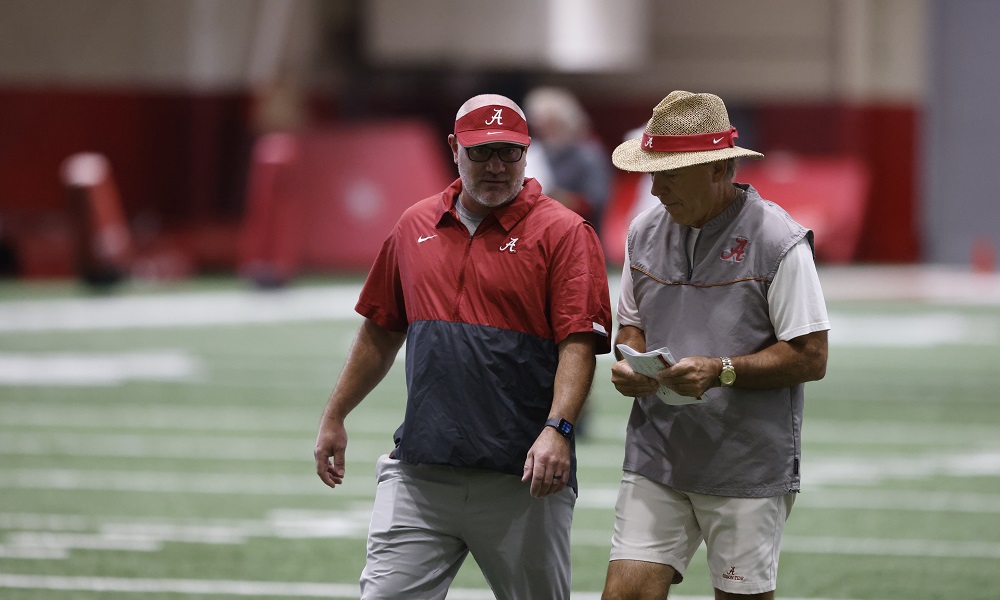 Alabama football opened its season with a 44-13 victory over Miami, but Nick Saban was not pleased with the lack of intensity in the second half.

On Wednesday, he returned to his “Rat Poison” speech for reporters after the Crimson Tide did not have a great practice on Monday. He has a method to his madness, and Saban does not want his teams letting up. The 69-year-old remembers the 21 points and 300+ rushing yards that Georgia Southern totaled against Alabama’s defense in 2011. This week’s home opener for the Tide has Mercer, a wishbone offense, coming to Bryant-Denny Stadium.

After a strong performance versus the Hurricanes, Alabama should get a couple of possessions from Bryce Young.

He might play the entire first quarter, but the coaching staff needs to get him out of the game.

The sophomore will build off his success from week one; however, Young is more important for the Florida matchup to open Southeastern Conference action.

2. Chemistry developed on the offensive line

The offensive front is probably the area where Alabama needs to keep starters in throughout the game. A combination of good and bad moments happened versus Miami.

Despite its ability to run the football and protect Bryce Young, Alabama’s offensive line had a few mental errors.

Young was sacked once, but it produced a lost fumble. His athleticism also got him out of pressure situations. The Tide must develop more chemistry upfront in their assignments.

It held the Hurricanes to 13 points and 266 yards offensively, but Alabama’s defense faces a different animal this week.

Mercer’s offense totaled 69 points against Point in a shutout win.

The Bears had a 100-yard rusher (Tommy Pollack) and its three quarterbacks combined to complete 18 of 25 passes for 239 yards with three touchdowns to one interception.

Alabama’s defensive line must win its one-on-one battles, while its linebackers must attack the quarterback and pitchman.

The cornerbacks and safeties must also be strong in run support. Mercer will attempt some passes, but its objective is to pound Alabama’s front with the ground game.

RELATED: Alabama is developing Dallas Turner at outside linebacker with Christopher Allen out

Alabama needs to be sound in its assignments.

Drew Sanders, Dallas Turner, and Chris Braswell will all get opportunities at outside linebacker in the absence of Christopher Allen.

This matchup presents a chance for other young players to gain reps and confidence.

According to Coach Saban, he mentioned on his weekly show that Ga’Quincy “Kool-Aid” McKinstry will play versus Mercer.

JoJo Earle caught two passes against the Hurricanes, but expect to see him, Christian Leary, and Agiye Hall more in the passing game. Alabama also needs to get reps for Paul Tyson and Jalen Milroe.

Bryce Young is the starter; nevertheless, a moment could come where the Tide might look at Tyson or Milroe.

Alabama fans would want nothing more than having no injuries.

These games against lesser-tier opponents usually result in one or multiple injuries.

This is the reason for Saban to get starters out of the game early. Hopefully, Alabama will get through the matchup with an injury.

Stephen M. Smith is the managing editor and senior writer for  Touchdown Alabama Magazine.  You can “like” him on Facebook or “watch” him on Twitter, via @CoachingMSmith.