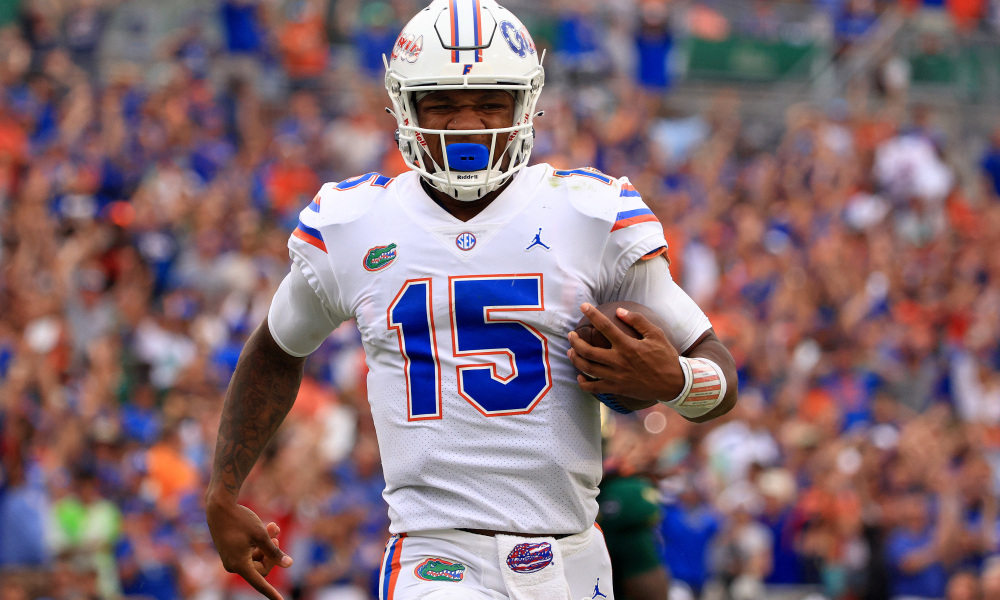 The Southeastern Conference will open this weekend with an outstanding matchup.

Alabama and Florida will battle each other at Ben Hill Griffin Stadium for the first time since 2011. Despite the confidence of Gator fans and its team, this is a statement game for the Crimson Tide. Bill OBrien (offensive coordinator) and Pete Golding (defensive coordinator) have a chance to dominate the contest. Florida is averaging 38.5 points per game offensively while allowing 17 points per game. Dan Mullen has a two-quarterback look and Todd Grantham wants to pressure Bryce Young.

RELATED: Will Anderson ‘could play’ vs Florida if improvements continue, per Nick Saban

It lost some explosive playmakers to the National Football League, but Florida has talent that Alabama must pay attention to. Listed below are the impactful players for the Gators.

Emory Jones has more experience; however, he also has four interceptions. Richardson, a freshman, has recorded four touchdowns (two rushing scores) with no turnovers. The 6-foot-4, 236-pounder is a Gainesville (Fla.) native that possesses accuracy, arm strength, good decision making, and athleticism.

Tim Tebow was the last quarterback for the Gators that gave Alabama’s defense problems.

Richardson’s skill set can be dangerous, especially if he gains confidence early in the matchup.

He totaled 23 catches for 435 yards with three touchdowns in 2020. The 6-foot, 203-pounder is the Gators’ leading receiver through two games, totaling six catches for 190 yards and two scores. Copeland is averaging 32 yards per catch and 95 yards per contest. He has the speed, hands, and routes to create separation and make plays on the football. Copeland can also make contested receptions and burned defenders for huge plays. Florida will have to take shots with him against Alabama.

He considered the Tide in the 2019 recruiting cycle, but Copeland signed with the Gators.

Ventrell Miller is the captain of Florida’s defense.

He led the team in tackles (86) as a junior and posted 7.5 tackles for loss, 3.5 sacks, and three pass breakups last year.

The 6-foot-1, 226-pounder has eight tackles this season, but he is the enforcer at linebacker.

Miller sets the defense against the run and he pressures the quarterback. He will be calling the signals as the Gators look to make Bryce Young uncomfortable. Miller is one of the best linebackers in the SEC. This game offers him a chance to improve his NFL Draft status.

He commented on Alabama needing to be ready, but Brenton Cox is a force up front.

As a transfer from Georgia, he has produced on the edge for the Gators.

RELATED: Gators’ LB Brenton Cox Jr. has one message for Alabama: “Are they ready?”

He also recorded a team-high 18 quarterback hurries. Cox is one of the best outside linebackers in college football and has first-round draft status on his mind.

Whether it is Evan Neal or Chris Owens, one of the two must neutralize Cox.

Kaiir Elam is Florida’s best player in the secondary.

During his sophomore season, he tallied 11 breakups and two interceptions. Elam has the Gators’ lone pick this season, and he carries the ball skills to make plays in space. Bryce Young has to be aware of him throughout the matchup.