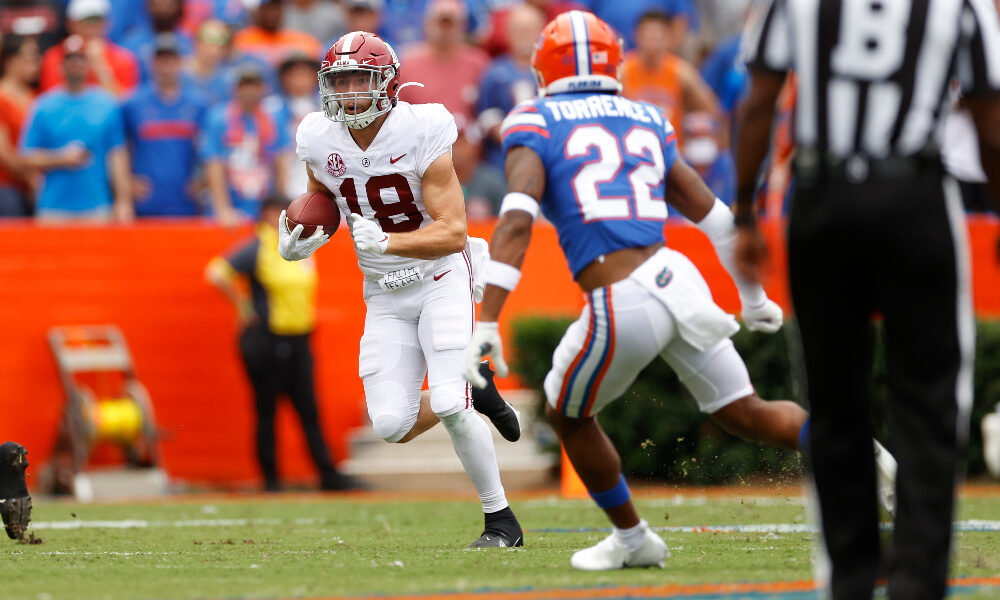 Nothing was gong well for Alabama’s offense during last weeks game against Florida, especially after the first quarter. After a 21 point,172 yard get off in the first 15 minutes, the offense’s production came to a screeching halt as it posted 152 yards and 10 points in the final three quarters of action.

There likely wasn’t a better example to sum up the day offensively than wide receiver Slade Bolden’s dropped touchdown in the third quarter. At the time it was a 21-16 and Alabama was desperately looking for a score which it nearly had with Bolden who found himself wide open in the heart of the defense.

The ball struck Bolden directly in the hands but uncharacteristically slipped right through with the junior receiver displaying his displeasure. Thankfully for Alabama, running back Brian Robinson was able to break the plain with a 2-yard touchdown run as the Crimson Tide went on to narrowly defeat the Gators 31-29.

On Tuesday, Bolden was asked by the media about the play and how he is looking to move forward.

“Working on receiving and catching is one of the biggest things I take pride in,” Bolden said. “I’m always trying to catch everything that’s around me, and it’s not like me to drop a ball, but it happens. I’m not perfect in football and just in life, it happens. I was able to just, once that happened, just to go on to the next play.

“What is the next thing I can do to help the team? And also what’s the next opportunity that may present itself and take advantage of it? And I was able to have coaches and teammates be able to keep me from getting too down on myself, which I knew from the jump as soon as it happened to forget about it.”

Bolden finished last Saturday’s game with three catches for 19 yards against the Gators. Although he was not targeted following the drop he appreciated the coaches leaving him in the game and showing confidence he would still be able to contribute.

“I believe that they know exactly what kind of skill sets I bring and attributes that I bring,” Bolden said. “And dropping one pass or a pass at all, it’s not like me. So you know I felt like it was good that they kept me in because, you know for any other players you want to keep playing that guy or whoever to you know, If you’re a receiver or quarterback, to keep pressing on. That way they build more confidence. But just like with that being said, I mean I dropped the ball.