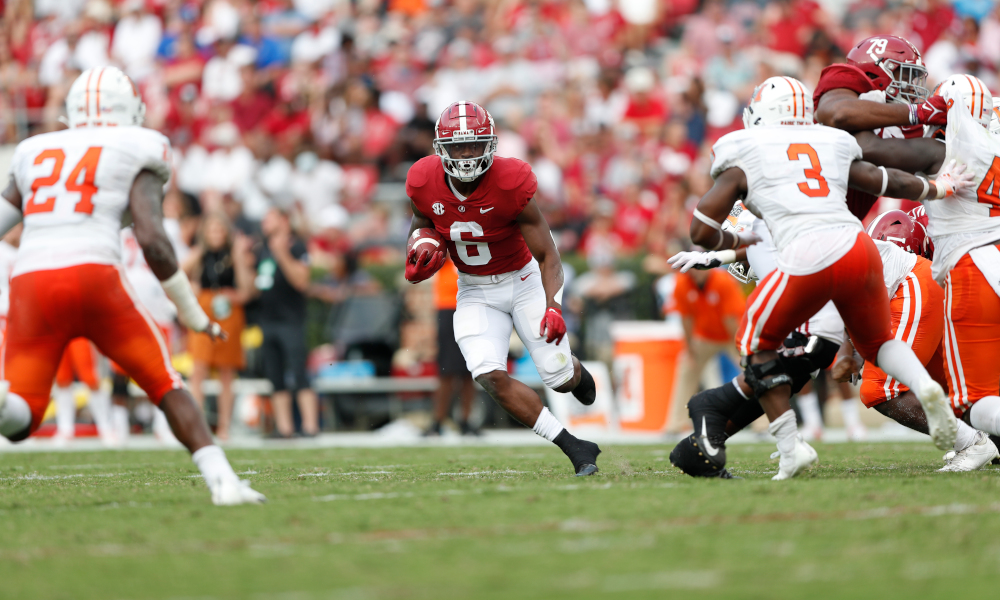 The Tuscaloosa native continued to play and performed well in a 31-29 win for the Crimson Tide. Coach Nick Saban told reporters that Robinson was day-to-day, but he had a new update during Thursday’s “Hey Coach” show.

He said the fifth-year senior was banged up; however, it is nothing serious. Robinson totaled 75 yards rushing against the Gators and scored two touchdowns.

He is Alabama’s leading rusher, averaging 69.3 yards per game. Robinson will get some work in this matchup, but Southern Mississippi opens a chance for Trey Sanders and Roydell Williams.

Saban has been pleased with Robinson and Jase McClellan; nevertheless, he wants more opportunities for Sanders and Williams.

Neither one played last week versus Florida.

“Hopefully, we will get to play Trey Sanders and some of the other (RBs) this week as well because we need those guys to get some experience,” Saban said.

Sanders, a redshirt sophomore, got experience in 2020 versus Mississippi State.

He recorded 12 carries for 80 yards inside Bryant-Denny Stadium, including a pair of 20+ yard runs.

After sustaining injuries in a car accident, Sanders missed the remainder of the season. He collected his first rushing touchdown in Alabama’s season opener against Miami.

Williams, a native of Hueytown, Ala., performed well in spring practice. According to Robinson, Williams is the smallest of Alabama’s backs but packs a lot of speed. The Tide wants to get him in action to create a change of pace on the field.

Alabama needs to have Robinson at 100 percent for Ole Miss. This week’s game should feature more of Sanders, McClellan, and Williams as the offensive line builds an identity for a showdown with the Rebels.