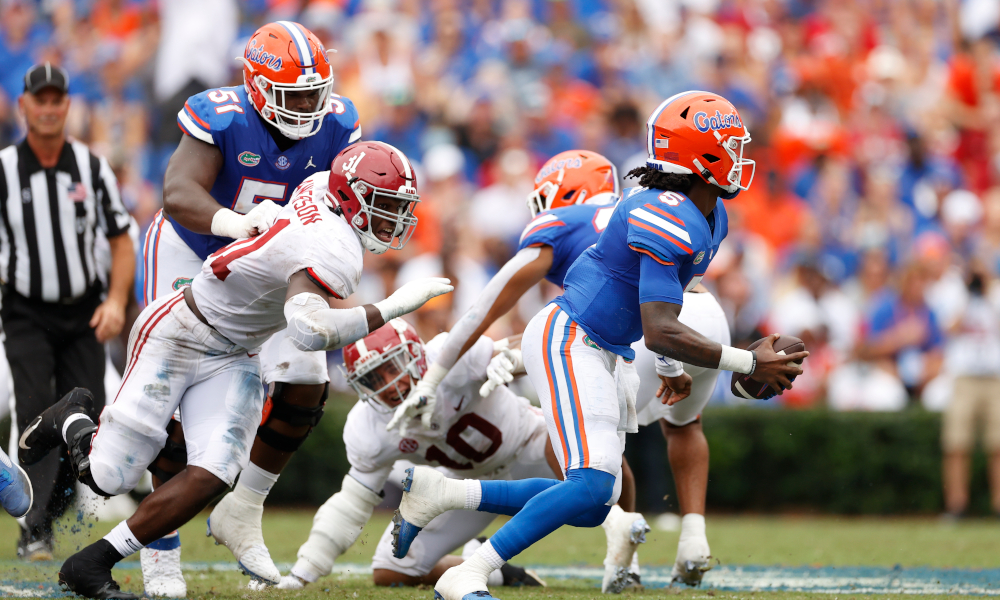 In Wednesday’s presser, Nick Saban identified one player that upholds the “Alabama standard.”

Who will join Will Anderson Jr. as a defensive leader? Coach Saban and fans alike hope to receive an answer to this question before the Crimson Tide gets deeper into the season.

Anderson was not 100 percent versus Florida, but one could not tell with the determination he showed. Despite coming off a knee injury, the sophomore linebacker was dominant at Ben Hill Griffin Stadium.

RELATED: Bryce Young has done a ‘really good’ job of handling himself in the pocket, per Nick Saban

He persevered through the humidity, crowd noise, and fatigue. Anderson recorded seven tackles, 3.5 tackles for loss, and four quarterback pressures in Alabama’s 31-29 victory. The 6-foot-4, 243-pounder won SEC Co-Defensive Player of the Week for his efforts. Alabama probably loses the matchup if not for Anderson’s toughness. On Monday, he spoke to reporters about how it’s time for the defense to get its act together. He wants to see this group play to the program’s standard.

Anderson is getting Saban’s message across, and he appreciates it more than the native Georgian knows. When the media brought up Anderson’s status, Saban said he showed a “warrior’s mentality.” He was not 100 percent, but nothing was going to stop him from playing.

“A lot of college players think the opposite of pro players,” Saban said. “Pro players think ‘I am going to play no matter what because I am getting paid to do my job, and I don’t want anyone else to take my job.’ But college players seem to think ‘I gotta be 100 percent to play.’ You have an opportunity when you are not 100% to show that you are a warrior. To show you can go out there and play, be player of the week when you weren’t 100 percent, and he wasn’t 100 percent. He did not practice all week, and he got tired in the game. He did practice some, but he didn’t practice like he always does. He got tired in the game, but he persevered. He showed a warrior’s mentality, and that creates tremendous value to me for any player that can do that.”

RELATED: Urban Meyer says coaching in the NFL is like playing “Alabama every week”

Saban said Anderson’s plays to the standard that Alabama wants for all players.

“I don’t see him being a working progress,” he said. “He plays to the standard all the time and he does it consistently, and sets a great example for every other player who wants to be successful. He has some leadership qualities that are going to grow and develop as we go through this season and in the future.”

Before opponents start doubling Anderson, Alabama’s defensive coaching staff has to get other players to emerge. The talent is there with Drew Sanders, Dallas Turner, Chris Braswell, King Mwikuta, and players on the defensive line.