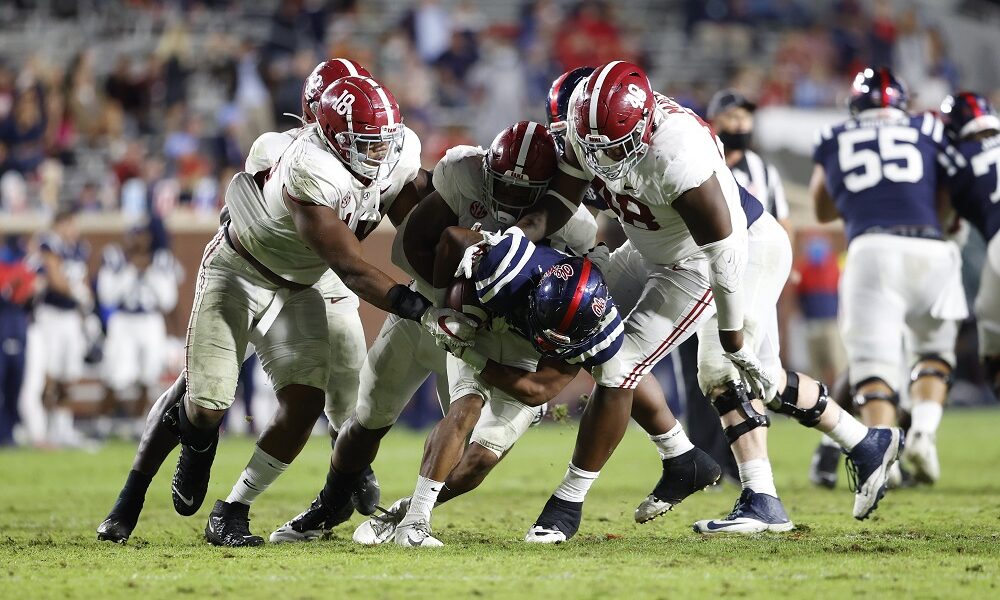 Alabama wasn’t tested very often in its 2020 season which was reflected by its average margin of victory of 29.1 points while going a perfect 13-0 on its way to its 18th national championship.

But of the few times, the Crimson Tide’s saw its backs against the wall the most prominent one in the front of fans’ minds came during its Week 3 matchup against Ole Miss.

At the time Alabama was ranked No. 3 in the country when it traveled to Oxford, MS, to challenge first-year head coach Lane Kiffin and his unranked Rebels. No one expected much of a fight from an Ole Miss team which proved to be wildly inconsistent in the years prior, but what unfolded was a 63-48 shootout which put the country on notice and left a mark on the members of the Crimson Tide who will be playing in the rematch this Saturday.

“It was crazy man,” offensive lineman Evan Neal said to reporters on Tuesday. “There’s nothing like a shootout. As an offensive player, those are the really fun games.”

Last year’s game was one of two times the Crimson Tide offense was able to put up over 60 points while putting up an astonishing 723 yards on an inferior Rebels defense. But fun isn’t a word that’ll be heard from other players on the roster, especially on the defensive side of the ball.

The issues and struggles of Alabama’s defense in 2020 were never more apparent than when facing Ole Miss quarterback Matt Corral and company. Pete Golding’s group surrender 647 yards of its own and allowed the Rebels to have a pair of 100-yard rushers on the day.

“They harp on it,” Alabama linebacker Henry To’oto’o said when asked about his teammates’ thoughts on last year’s game. “It wasn’t the game that they wanted, it wasn’t the kind of performance on defense they wanted. So this week’s been a huge harp on executing what we have to do. Ole Miss is a great team, they do great things on offense and it’s a huge challenge for us and we’re looking forward to that challenge.”

What could have easily spawned frustration for Alabama’s defense was turned into evaluation and improvement across the season. Following the game, the Crimson Tide went on to lead the SEC in fewest points allowed per game with a number of its defenders using the Ole Miss game to fuel their improvement.

“It was a good experience for us,” defensive lineman Phidarian Mathis said on Monday. “I think it was a wake-up call for the Alabama team. But at the end of the day, you know, that’s last year. This is a new season and we’re gonna come out with that Bama mentality this Saturday and ready to roll.”

“We knew we had things to improve on,” safety Jordan Battle added on Tuesday. “That’s what we did. We went to the drawing board, fixed everything we needed to fix, and moved on to the next weekend to prepare for the next game. And that’s just always the mentality that we have to have.”

Alabama will host Ole Miss in the long-awaited rematch inside Bryant-Denny Stadium on Saturday, Oct. 2 at 2:30 p.m. CT.