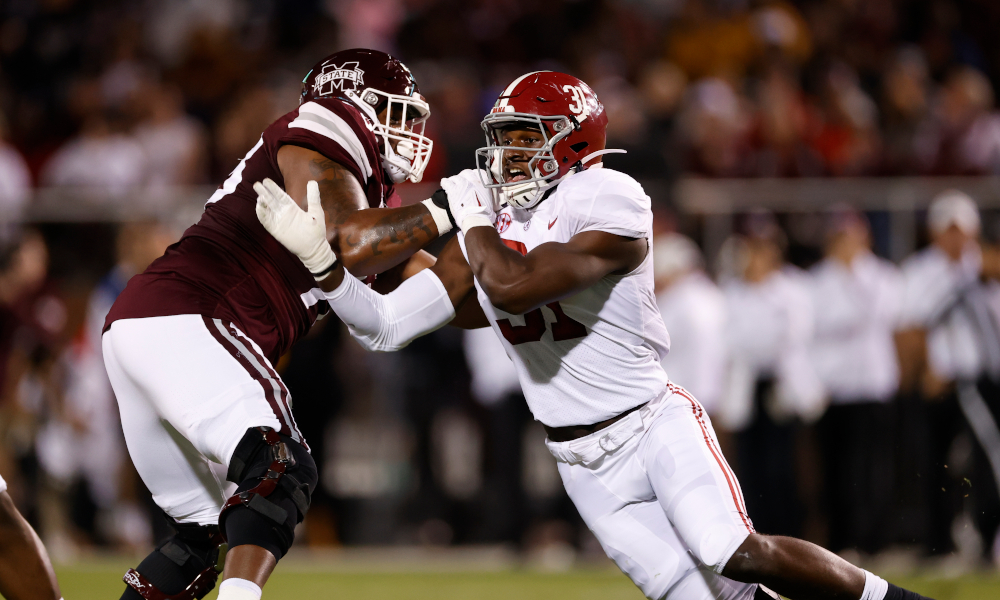 When he paused at his presser and his emotions sunk in, he got the attention of reporters, coaches, and teammates.

He loves making big hits, he loves sacking quarterbacks, he loves creating turnovers, and he loves rendering offenses helpless. These were the reasons he chose to leave the state of Georgia and sign to the University of Alabama in the 2020 recruiting class. Despite his arrival as a five-star, Anderson has a chip on his shoulder.

He wants to be legendary, and people felt his passion from high school to his freshman season with the Crimson Tide. Anderson is a future top-five NFL Draft pick; however, he is more about the team than himself. Last week, he pushed the defense to a 49-9 rout of Mississippi State.

Anderson totaled six tackles, including four for loss and four sacks. Alabama’s defensive coaches moved him around, and he affected Will Rogers in the pocket. He became the first defensive player since 1988 (Derrick Thomas) to record four sacks in a single game for Alabama. The 6-foot-4, 243-pounder tied Thomas and Leroy Cook (1975) for second all-time in school history.

He repeated himself for the matchup with the Bulldogs, and it took root. On Monday, Coach Saban said he is happy that Anderson has taken responsibility to lead. He wants young players to aspire to the standard of older guys on the team.

According to Malachi Moore, the sophomore defensive back said Anderson took a big step as a leader in the offseason.

“Will comes into work every day,” Moore said. “He’s one of those players that when he says it, everyone listens. He goes hard every day. He’s always trying to keep everyone accountable.”

People do not like comparing him to Derrick Thomas, but Anderson is Alabama’s first feared pass rusher since Tim Williams.

Williams played with more talent on the defensive line than Anderson, but the sophomore is a three-down linebacker.

Will Anderson vs. Tim Williams, behind the numbers

*Both players won a national championship as first-year starters

The team sees how much Anderson wants to be dominant.

He has taken on the mindset of Jonathan Allen, Reuben Foster, Ryan Anderson, and others before him. No one wants to let Anderson down or have him upset with them. He looks to build off the outing from Starkville (Miss.) and craft an identity.

Anderson and the Alabama defense faces Tenessee this week.