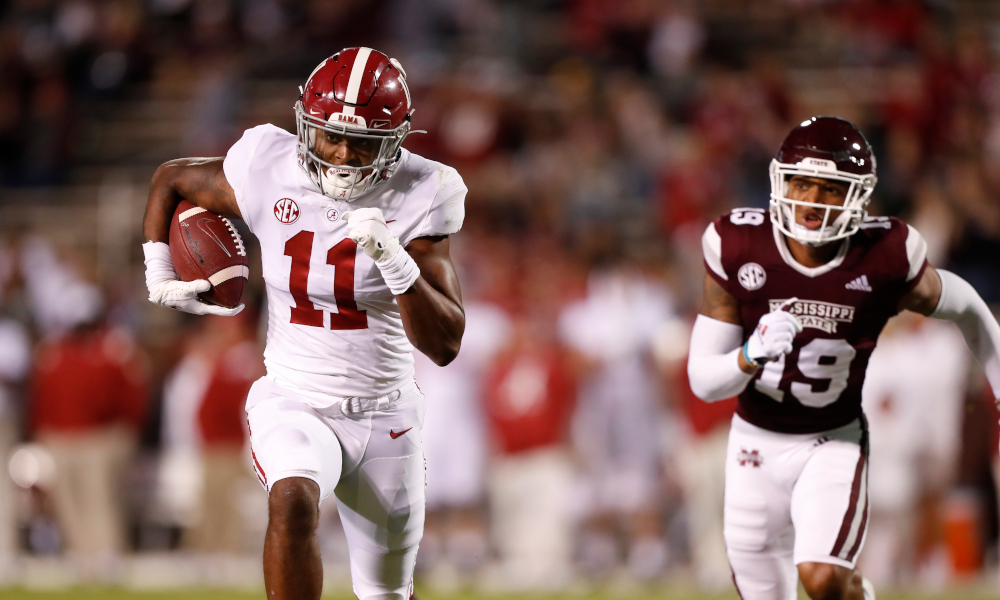 Traeshon Holden is the latest playmaker for Alabama at wide receiver.

Crimson Tide fans knew the native Floridian had talent in the 2020 recruiting cycle.

He played at Narbonne (Calif.) High School for his final prep season, finishing his senior year with 31 catches for 512 yards and seven touchdowns. Regardless of the attention Agiye Hall received on A-Day, Holden performed well in the spring game too. He caught nine passes for 89 yards and helped sophomore quarterback Bryce Young led the first-team offense to a 13-10 victory.

The 6-foot-3, 208-pounder has been getting extended playing time, and he produced versus Mississippi State. Alabama used Holden in the manner that it did with DeVonta Smith. He was put in motion to create different matchups, but his roommate (Young) targeted him three times.

Holden caught all three passes for 70 yards, including a 29-yard touchdown. His receptions went for first downs or scores, while two of his catches converted third downs. Holden showcased his speed on the touchdown as he accelerated to the end zone after turning his shoulders. He and his teammates celebrated his first career touchdown catch.

Can’t believe they let me shine I was waitin🤞🏽💕 #RollTide pic.twitter.com/POcOfjz87z

Coach Nick Saban raved about Holden’s progression before the game.

“He’s got the most playing time,” Saban said last week. “Traeshon is the most consistent of the young receivers.”

Jameson Williams spoke about how he loves Holden’s game.

“Traeshon is a good wide receiver,” Williams said. “He has a different playing style.”

Holden’s value is starting to increase.

He carries the size, routes, hands, speed, and work ethic to be reliable. According to Bryce Young, Holden has always been prepared for the moment.

“I haven’t seen anything different,” Young said of Holden’s preparation. “It’s been steady work for him. I think Traeshon has been, from the offseason to now, I think he’s done a good job. He’s always been ready. He has not been doing anything crazy different during the week. He’s always been prepared, and is someone who approaches things with a professional attitude.”

Holden has also been great off the field too, per Young.

When it comes to his speed, it is reminiscent of Robert Foster. In Alabama’s 2017 matchup against Colorado State, Foster took a short pass from Jalen Hurts and exploded downfield for a 52-yard touchdown. Foster, a former five-star, ran a 4.41 in the 40-yard dash in the 2018 NFL Scouting Combine. Holden has the juice; however, he’s excited to be contributing to the team at receiver.

He has nine receptions for 145 yards with one touchdown.