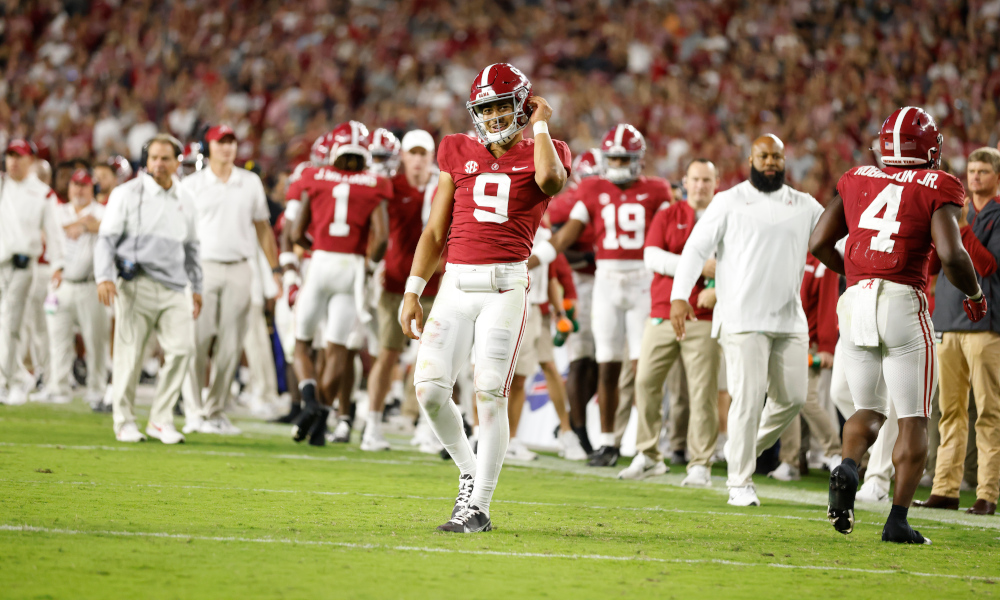 When it comes to quarterbacks at Alabama, Nick Saban has shared iconic moments with a few of them.

He even got emotional during an interview about Jalen Hurts in the 2018 SEC Championship Game.

Special players for the Tide get those marquee moments with Saban that will be remembered.

Bryce Young had his moment last week against Tennessee for homecoming.

RELATED: Multiple times and networks have been announced for Alabama-LSU game

The sophomore guided Alabama to a 52-24 victory, earning SEC Offensive Player of the Week honors. Young had an impressive outing, but the ESPN cameras captured a moment of him looking frustrated on the sideline. Coach Saban walks up to his starting quarterback, looks him in the face, and shares some words with him. No one knows what was said, but it sparked something in the California native.

He recorded his fifth 300-yard passing game and the sixth matchup completing 70 percent of his passes. Saban was the guest speaker for an event at the Monday Morning Quarterback Club in Birmingham, Ala. After participating in a charity event, reporters asked him about the moment with him and Young.

Saban said the second-year quarterback is ‘easy to coach’ and ‘wants to do everything right.’

“He always prepares well for the game,” Saban said. “He’s got a great personality. He’s got really good leadership qualities about him. It’s really important to him to sort of be the best that he can be, which you always love in competitors and you always love in players.”

As a quarterback, Young gets frustrated when he makes a mistake. He gets frustrated when passes are dropped, and when offensive drives do not end with touchdowns. All of these are aspects Saban understands. He has a signal-caller who wants to be legendary; however, it is also a good thing to keep him calm. Saban has the statement of “play with emotion, but do not be emotional.” He wants athletes to play with passion, but he does not want players to be overly frustrated when mistakes come.

“There’s also always times for some teaching moments, which players gain and learn through experience,” Saban said. “And sometimes, you just need to talk about things, and Bryce is always really receptive to that because he’s one of those guys that’s never defensive about any corrections because he takes it like you’d like people to in terms of trying to use that experience – that failure even – as an opportunity to grow and get better.”

Young will continue to grow with more games and opportunities. He is propelling the offense to compete for a national championship and is in the Heisman Trophy race. Young is sixth in the nation for passing yards (2,453), third in touchdown passes (26), 11th for completion percentage (70), fourth for passer rating (177.1), and second for quarterback rating (88.5).

He became the first quarterback in Alabama history to record 350+ passing yards and two rushing scores in one game.

He will face the LSU Tigers in two weeks at Bryant-Denny Stadium.