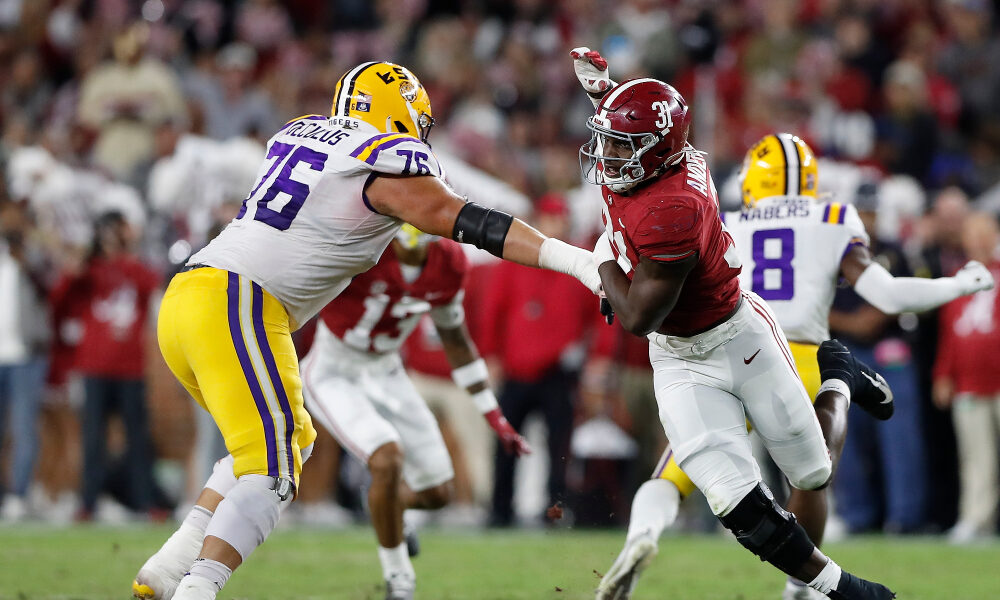 There may not be a more dominant player in college football right now than Alabama linebacker Will Anderson. And people are beginning to notice.

Anderson has been slowly gaining momentum over the past few weeks and it all came to a head on Saturday against LSU where the sophomore posted his best game of the season. He led the Crimson Tide in tackles with 12, 4.0 tackles for loss, 1.5 sacks, two quarterback hits and one pass breakup.

Joining the Heisman Trophy conversation is difficult enough, but to do it as a defensive player is rare. Luckily for Anderson, his teammates have started campaigning on his behalf.

“You guys see it every Saturday, Will’s all over the place, making plays,” linebacker Henry To’oTo’o said following the game. “I think Will should be up there, I really do.”

On Tuesday a few more of Anderson’s teammates joined in on the praise, including defensive back Malachi Moore who publicly endorsed Anderson on Twitter following the win over LSU.

“I think he’s very deserving of that award in my opinion,”Moore said. “I feel like this season, Will has just continued to separate himself from the season he had last year every week, and every day, he continues to get better and better.

“He doesn’t let it affect him, though. He doesn’t let the outside noise affect, and he goes to work every day like he has a chip on his shoulder.”

“His name is not coming up for no reason,” Dale said. “I feel like he deserves to be there. But I know Will. He’s just going to work. He’s not really worried about it. Will is great, and he’s amazing to play with.”

Anderson has certainly played this season with something to prove. Through nine games, Anderson has already exceeded his total tackles (65) and sacks (10) from a season ago, while registering five sacks over the past three games for the Crimson Tide.

The last defensive player to even make the trip to New York for the Heisman Trophy ceremony was Ohio State defensive end, Chase Young, back in 2019 where he finished fourth in the voting. Young’s former teammate now Alabama receiver, Jameson Williams, spots similarities between both defenders.

“I feel like Will has had an outstanding season,” Williams said. “I’ve seen Chase Young. I’ve been at (Ohio) State, I’ve seen Chase Young. But Will Anderson, oh yeah. He’s for real. I feel like he deserves everything that is being brought to him, Heisman talk, whatever it is. Will, he goes hard. He deserves it. Every day at practice, he’s a leader for the team. He talks to other guys during practice. Everything is well deserved for Will. So if Heisman talk is one of those talks, I feel like he most definitely deserves it.”

A defensive player hasn’t won the Heisman Trophy since 1997 when Michigan defensive back Charles Woodson took home the award. His teammate and quarterback Bryce Young is currently still the betting favorite to win this season which would give the Crimson Tide three winners in the Nick Saban era.

But Anderson has a different trophy on his mind that he hopes to take home this season.

“I’m just focused on helping the team get to another natty,” Anderson said on Saturday. “That’ all I’m worried about, getting to a natty.”