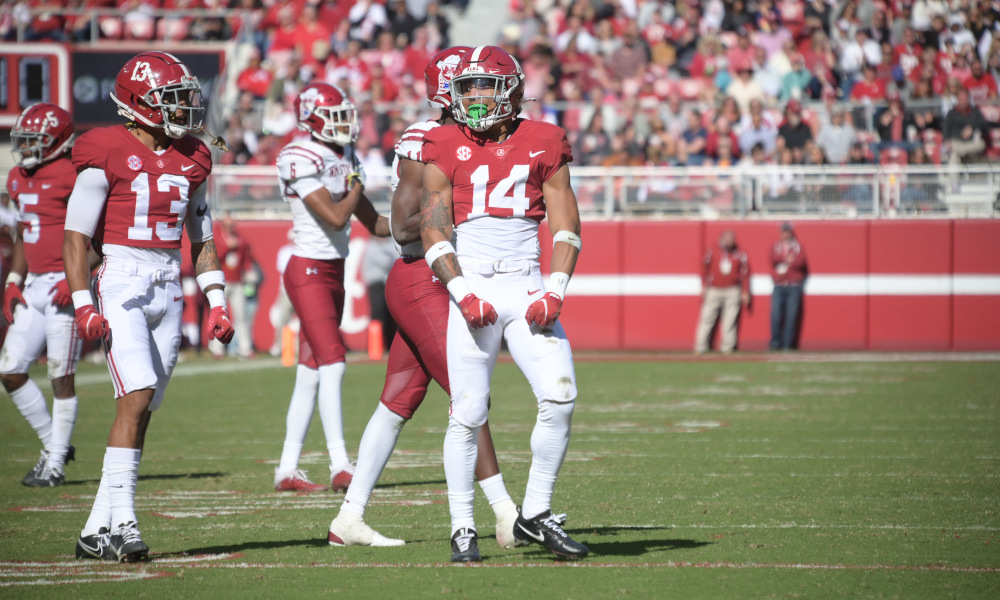 It is usually the measuring stick in college football, but this season has been different for Alabama.

Despite its impressive collection of athletes, the Crimson Tide must fix its inconsistencies.

Regardless of how good the Tide is, the state east of Alabama possesses a hungry team.

Kirby Smart is trying to lead the University of Georgia to a status it has not had since 1980.

When the Bulldogs won a national championship, prices for cars, gas, eggs, movie tickets, and milk were very good.

In football, Georgia is built similar to the 2009 and 2011 national championship teams at Alabama.

The Bulldogs have an incredible defense — anchored by a stifling front seven — that’s allowed 7.6 points per game. Coach Smart has seen this unit force two shutouts and keep all opponents under 20 points. Todd Monken is not the most dynamic offensive coordinator, but Georgia makes winning plays with his calls.

Stetson Bennett is far from being an explosive quarterback; however, his toughness and winning mentality are what the Bulldogs need for a national title. He protects the ball (four interceptions), makes great plays with his feet, and he enhances the running and defense by not making mistakes. The formula has Georgia as clearly the best team in college football.

Most would say the Bulldogs will wipe the floor with Alabama if both played right now.

RELATED: It’s time for Josh Jobe to turn it up a notch as Alabama’s senior statesman in the secondary

It has to play Arkansas and Auburn first, but people want to fast forward to Alabama versus Georgia. The Crimson Tide has the talent to be the best team in the nation, but how does it change the narrative? Four highlighted aspects are below.

1. Alabama’s OL must continue to improve

Bryce Young had time to complete at least 90 percent of his passes and tossed four touchdowns versus New Mexico State.

The offensive line allowed him to have a big performance, but it must build off it. No matter what combination Alabama selects for its lineup, the unit has to continue to improve. Doug Marrone’s group will face a stout Arkansas defense and a tough team in Auburn soon.

Both schools have physical linebackers and strong linemen that will pressure Young. When it comes to Georgia, Alabama has to stalemate the Bulldogs. It will not dominate that front; however, the Tide will do well if it wins a few possessions.

Alabama and Georgia could come down to a couple of big plays. Protecting Young will allow the Tide to take some shots.

2. Bryce Young has to gain consistency on deep passes

Bryce Young is more electric at quarterback than Stetson Bennett.

Alabama has the better offensive playmaker, but Young has to fine-tune his deep ball passing. After the offensive line, the Alabama-Georgia game could come down to which quarterback can make the big throws? Young might have three to six opportunities to attack the Bulldogs’ defensive secondary. He must connect with receivers on each chance he sees.

RELATED: Could Alabama and Texas swap coaches at the end of the season with Steve Sarkisian’s job in jeopardy?

Alabama has the weapons to highlight Georgia issues on the back end. Jameson Williams, John Metchie, Traeshon Holden, Jahleel Billingsley, and Cameron Latu have talent.

Young has to use the next two games to perfect the vertical passing game.

Alabama has suffered three significant injuries at running back.

Jase McClellan, Roydell Williams, and Camar Wheaton are all down.

Trey Sanders is prepared to step up behind Brian Robinson, and the Tide has Christian Leary and Demouy Kennedy as “emergency” backs. Despite this, Georgia’s front is nearly impossible to run on. The Bulldogs have allowed 78.1 yards rushing per game on 2.5 yards per attempt. Two rushing touchdowns have been scored on Georgia’s front. Alabama is not going to run the ball directly at the Bulldogs. It may find success in zone stretch or outside runs, but Bill O’Brien has to figure that out.

RELATED: Arkansas stands in between Alabama and an SEC West crown this week

The main objective for O’Brien is in the passing game. Alabama has to go heavy on screens, bubbles, slants, option routes, and passes out the backfield to backs. O’Brien has to challenge the lateral quickness of Georgia’s linebackers to soften the middle.

He has two games to get prepared.

4. Alabama’s defense has to force a shutout

Shutting out SEC teams is hard to do, but Georgia has done it twice.

Alabama’s defense needs one shutout to have its confidence on point for the game.

It has been inconsistent for most of the season; nevertheless, the Tide has played well in back-to-back weeks. Alabama suffocated LSU in the second half of a 20-14 victory, and it surrendered under 150 yards offensively to New Mexico State. In two matchups, the Tide had 12 sacks, 20 tackles for loss, 11 pass breakups, 12 quarterback hurries, three forced turnovers, five shutout quarters, and allowed eight third-down conversions (31 tries).

If it can blank Arkansas or Auburn for a game, Alabama would get a boost of momentum.