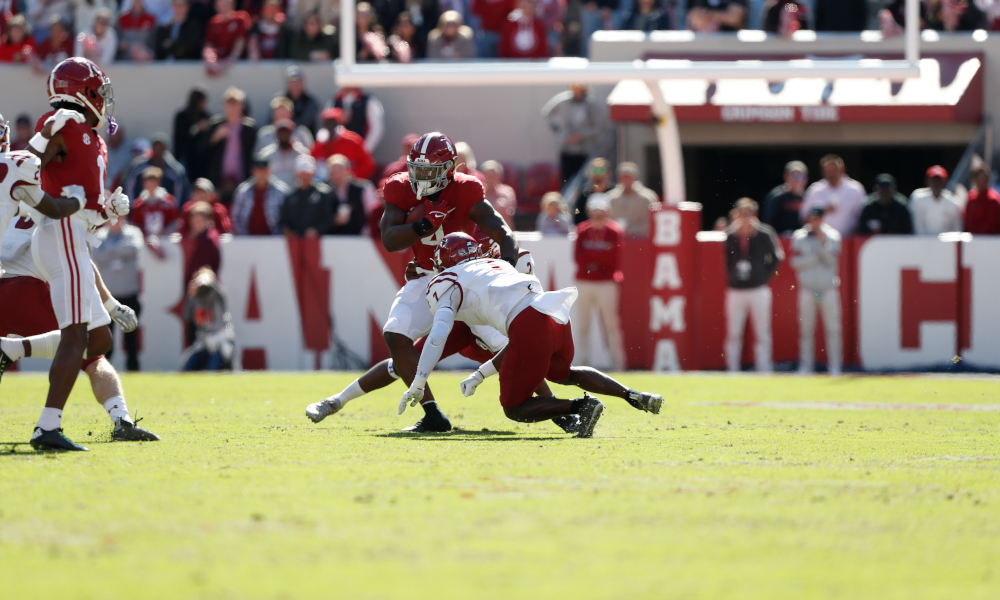 Christian Leary (wide receiver) and Demoy Kennedy (linebacker) are “emergency” running backs, but Alabama has one player ready to go the distance as the bell cow rusher on offense.

Brian Robinson Jr., a Tuscaloosa native, has waited for this moment. He has performed well as a fifth-year senior, totaling 823 rushing yards with 14 touchdowns on 164 carries. Robinson added quickness to his game during the summer and improved his hands as a receiver.

He is averaging five yards per rush attempt and 91.4 yards per game after 10 matchups.

The 6-foot-1, 225-pounder has three 100-yard games — Mississippi, Texas A&M, and Tennessee — and fell a yard shy of the fourth one versus New Mexico State. Robinson collected 23 passes for 205 receiving yards with two scores. He leads all backs in the Southeastern Conference for touchdowns while ranking fifth in the conference for yards.

People enjoy watching players break runs for long touchdowns; however, there is nothing like a back who can pound defenses into submission late in the year. During its national championship seasons, Alabama’s had a running back to wear down opponents.

Robinson fits the description of a bruiser, and he wants to take pressure off Leary and Kennedy. On Tuesday, he told reporters he’s ready for the championship push. Robinson feels like he is prepared to carry the load if necessary for the team.

“I feel fine,” Robinson said about his body health. “I’ve been doing all the things I need to take care of my body, so I can keep going. I feel great. I am ready to play this game.”

Robinson will face a gritty, physical Arkansas defense on Saturday at Bryant-Denny Stadium.

The Razorbacks bring in a tenacious front, but the senior is all in on helping the team.

“Whatever is necessary, I feel like I have prepared myself,” Robinson said on taking more carries. “I’m ready for whatever it is I need to do to help this team be effective.”

Robinson tallied 20+ carries in games versus Ole Miss (36), Texas A&M (24), and Tennessee (26). In a COVID-19 season, Najee Harris earned 20+ carries for Alabama in seven games for 2020. He had marquee outings versus Mississippi, Georgia, Mississippi State, LSU, Florida, and Ohio State. Harris was one of the leaders behind an undefeated national championship campaign.

Robinson said he is ready to handle more as a running back.