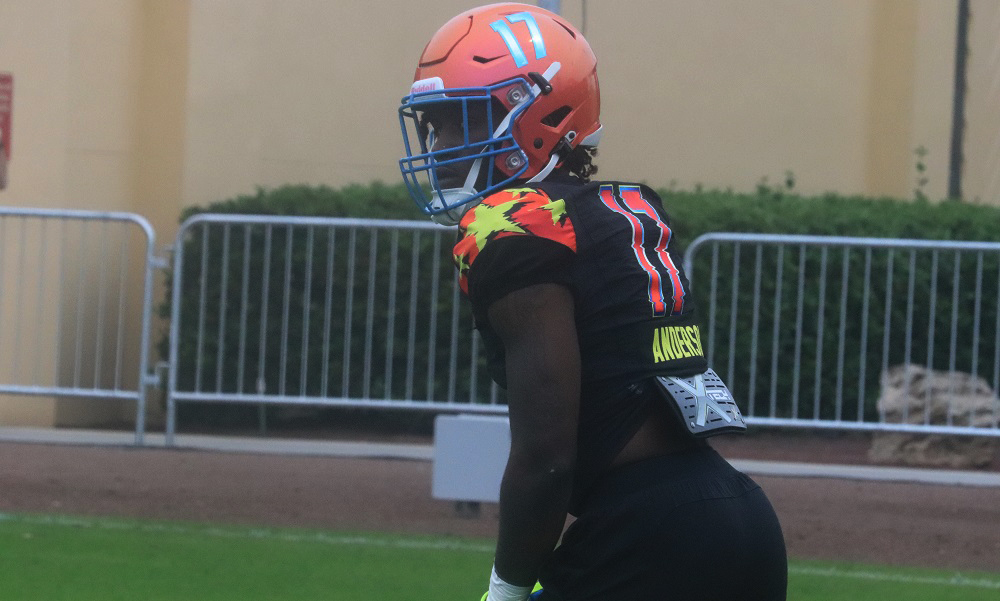 The first two practices for this weekend’s Under Armour All-America Game are in the books.

Touchdown Alabama was able to see all nine Alabama signees in action on Wednesday night and Thursday morning. Here are our biggest takeaways from each Crimson Tide signee.

Alexander fits right in with the loaded defensive line group at the event, although he is a couple of inches shorter than most of them. The Thompson product spent the first two days with the defensive line group despite having some experience at inside linebacker. He has been able to do what he loves to do and get after the quarterback. On the first day, He went up against five-star offensive tackle, Zach Rice during the one-on-one portion. It was a pretty even battle. On one rep, Alexander had Rice on his heels with his impressive strength. The Alabama signee has proven he is one of the strongest players at the event this week by pushing offensive linemen backward during one-on-ones. He has taken the bull rush approach during most reps, and it has produced mixed results so far.

The All-Americans were in shorts and jerseys during the first practice, so Murphy was not able to be as physical as he likes. However, we were able to see a glimpse of what Murphy can do in pass coverage during the 7-on-7 portion. The five-star recruit moved smoothly and with a purpose in zone coverage. He knew exactly where he needed to be. He was also able to break up a couple of passes to the running back out of the backfield on the wheel route. Murphy continued to be successful on day two with his impressive first step and the way he floats to the football. At 6-foot-2 and 220 pounds, he has prototypical size for the linebacker position. His upper and lower body looks like he spent the entire season in the weight room.

Henderson’s slim frame did catch our eyes a bit more than usual with him lining up behind college-sized offensive lineman and against college-sized defensive linemen. Henderson looked as if he was ready to embrace the challenge on day one. He did not shy away from competition and as expected, he was a natural at catching the ball out of the backfield. He pulled in a reception for a touchdown during the scrimmage portion on day one. He caught everyone’s eyes with a one-handed grab on day two. Henderson’s speed has flashed when running routes out of the backfield and on a couple of stretch plays during the team portion.

Henderson has looked really natural catching the ball out of the backfield this week. pic.twitter.com/frUOGSHYQJ

Preston’s natural instincts really stood out on day one. He pulled in a couple of passes and was able to snag a spectacular catch on the sideline. He dragged his feet to make sure it was a completion. He is a true 6-foot-1 prospect. Unfortunately, the slick turf got the best off him a few times on day one. He responded with a huge day two at receiver. His ability to stretch the field was on full display as he created separation with his speed and route-running ability. His most impressive catch came when he was able to pull in a deep pass, and he held on to the football despite being leveled by the safety.

The Louisiana native pulled in several deep balls, held on to a few contested catches and displayed his route running ability. pic.twitter.com/otFSU8x2nB

Anderson immediately looked like one of the best wide receivers at the event the moment he stepped onto the field. He did not lose a single one-on-one battle. He was unguardable with his ability to get out of his breaks with explosive quickness. He looks the part at 5-foot-9 and 187 pounds. We stated Anderson was on five-star watch heading into this week, and the Louisiana native did not do anything to hurt his chances at getting his fifth star. He has consistent hands during both days of practice as he did not drop a single pass that his hands.

Fegans bounced back on next rep with a great pass break up. @TDAlabamaMag pic.twitter.com/XTzzu2gCAB

Booker has spent most of the team portion of practice at guard. We feel that is his natural position. The Alabama signees’ impressive mobility was on full display on day one. He gave Ohio State’s defensive end signee, Kenyatta Jackson a run for his money in the big-man challenge. However, Booker’s biggest moments were yet to come. He completely dominated one-on-ones. This was expected as Booker has a lot of experience in the camp setting.

He does not lose here. pic.twitter.com/hMifJbnCyL

There were questions surrounding what position Campbell would play heading into this week. Those questions have been answered as the Alabama signee spent the entire first practice with the inside linebackers. At 6-foot-3 and 215 pounds, he has the frame for the position. He also has some experience at playing there. He closed on the football with good speed on a couple of reps. On day two, we were able to see Campbell operate in space some more, and he did not disappoint. He ended the practice with a perfectly time interception.

Here is something Alabama fans would love to see more in the future as both embrace after making a stop. Both looked smooth on day 1. pic.twitter.com/ERGzTbTsZ9

Fegans was right at home during the one-on-one session. He won most of his battles outside of the time Aaron Anderson got the best off him. His ability to break on the football and attack it stood at the forefront of his performance on day one. His team spent a lot of time during 7-on-7 style practice on day two.

Nice break on the ball. pic.twitter.com/wn3wuNdSsM

Oatis did not see action on day one as he was seen without a helmet for most of the practice. He received a helmet on day two, and he was able to be more involved. He made a couple of plays in the team portion against the run as he was able to get around the offensive lineman with a nice rushing technique. However, he did not see much success during the one-on-one portion.