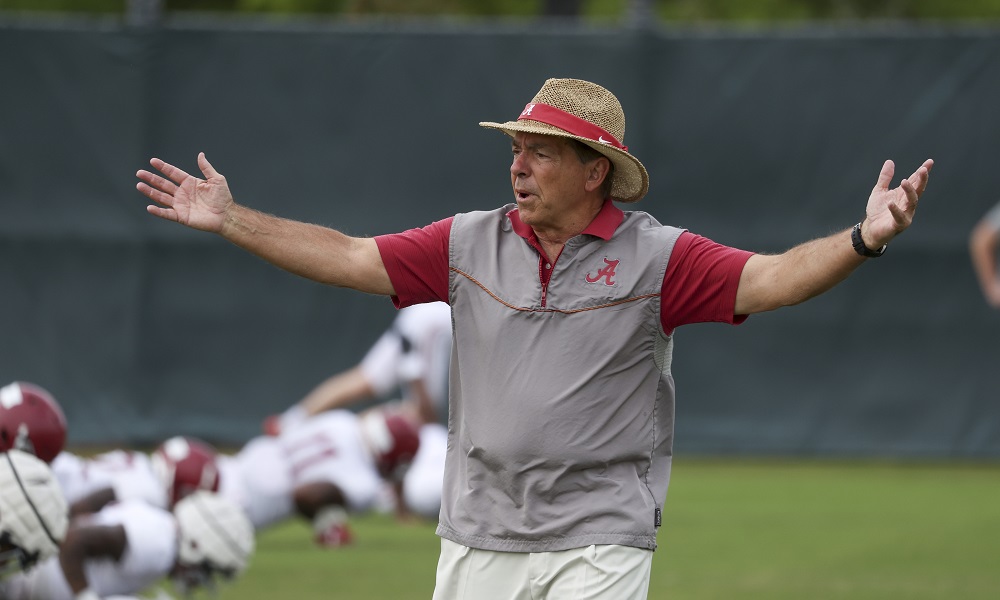 Nick Saban spares no one when it comes to college football.

We are in a new era of the sport that has name, image, and likeness compensation for players.

Coach Saban is for players getting compensated, but his mindset is making sure the powers involved do it correctly. He is at the 50-day countdown event for the World Games in Birmingham, Ala. Alabama suffered a 38-41 loss to Texas A&M in 2021 at Kyle Field, and rumors started about the Aggies using a significant amount of NIL to secure the No. 1 recruiting class for 2022.

Per Mike Rodak of AL.com, Saban called out Jimbo Fisher, Texas A&M, and its recruiting tactics.

His words sent a shock wave through social media.

Saban: We were 2nd in recruiting last year. A&M was first. A&M bought every player on their team. Made a deal for name, image and likeness. We didn’t buy one player. But I don’t know if we’re going to be able to sustain that in the future because more and more people are doing it https://t.co/uwEcLQa2u4

Fans were surprised at how Saban went at Fisher.

Texas A&M fans may believe this is the 70-year-old acting salty after losing to the Aggies last year.

NIL has become the wild west with no regulation or oversight. Per Rodak, Saban said the Crimson Tide used NIL “the right way” as several players were compensated. Twenty-five players earned revenue totaling $3 million from NIL. Fisher is going to be somewhere near a microphone preparing his response. He got his first top-ranked signing class for Texas A&M in five years.

Fisher looks for this class to compete for a national championship, but it has to play Alabama in Tuscaloosa.

Since 2010, former Alabama players have made $1.7 billion in the National Football League. Saban has been about developing players and wanting them to find their representation for NIL. He sees this model as coaches trying to gain an advantage for themselves, and he is not for it. It will be interesting to see the rivalry between Alabama and Texas A&M get deeper.