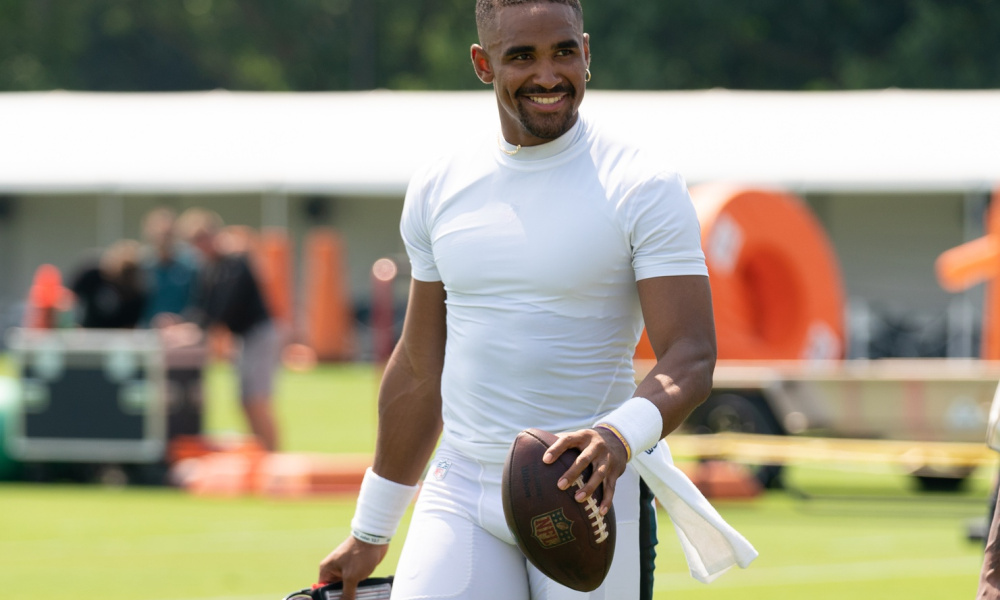 It is Jalen Hurts’ season for the Philadelphia Eagles and all eyes are on him.

He performed well through organized team activities (OTAs), but the third-year quarterback showed out Wednesday as Philadelphia opened training camp. Hurts looks stronger and his accuracy has gotten better. Eagles’ head coach Nick Sirianni entered the building with a Hurts t-shirt on, showing love to his signal-caller. A.J. Brown said practice was ‘lit,’ and he is excited about what Hurts can do in the fall. Brown wore a “Hurts SZN” at practice to let everyone know it is Jalen’s time to dominate.

AJ Brown said he is big on showing love

Loved seeing Sirianni in a Hurts shirt today. Had on the “Hurts Szn” hat to let everyone know it’s Hurt’s time #Eagles pic.twitter.com/oRRK5ZDIvw

According to Philadelphia beat reporters, Hurts tossed several touchdowns. He connected with Brown, DeVonta Smith, Jalen Reagor, Quez Watkins, and Kenneth Gainwell for scores. Hurts also threw an interception, but the ball got tipped on the play.

Hurts now up to 4 passing TDs on the say. Has been very good. Should be 5 but Smith dropped an easy TD #Eagles

Quez Watkins executed a very nice tip-toe reception for TD from Jalen Hurts, who rolled to his right and throw across his body. #Eagles Hurts has now connected with Brown, Smith, Reagor, Gainwell and Watkins for passing TDs today.

Excitement is in the air for the Eagles as they feel Hurts is the quarterback for them. He’s bonded the community off the field and earned everyone’s trust. Hurts took Philadelphia to the playoffs in 2021 and totaled 26 touchdowns.

RELATED: Could former Alabama LB Dylan Moses make a return to the NFL?

He is about getting the work in, and Hurts is ready to deliver on his work this season.