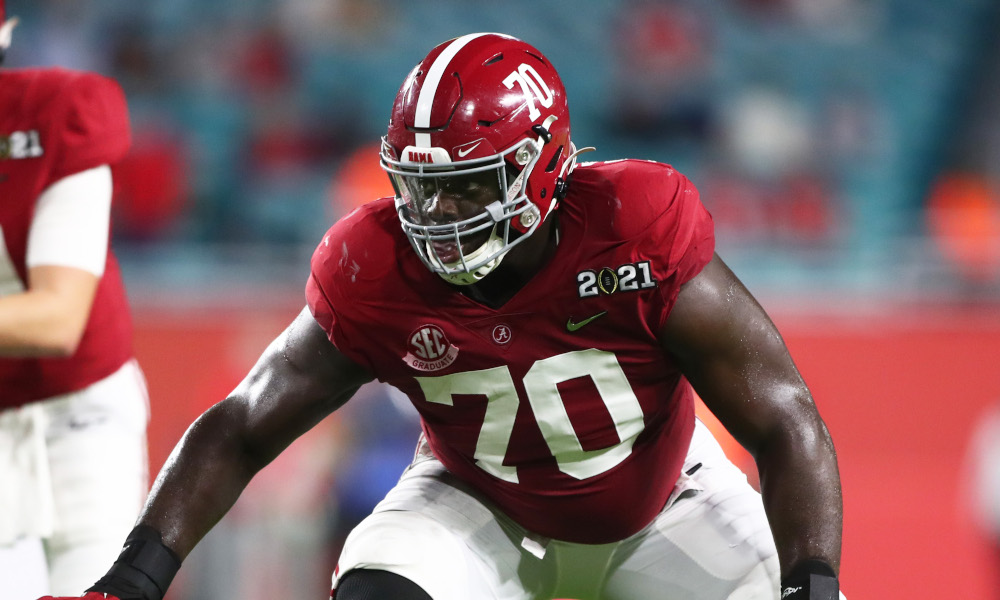 A former Unanimous All-American in the Nick Saban era at Alabama has a new NFL home.

Alex Leatherwood got claimed off waivers by the Chicago Bears.

Ian Rapoport of NFL Network reported the news Wednesday as the former first-round pick was released from the Las Vegas Raiders. Leatherwood was one of six Crimson Tide players taken in the first round of the 2021 NFL Draft. The Bears will inherit Leatherwood’s contract, which has three years and $5.9 million guaranteed left. Chicago has the right to use the fifth-year option.

The #Bears inherit Alex Leatherwood’s contract, which has 3 years left and $5.9M left that is fully guaranteed, plus they have the right to the fifth-year option. Las Vegas already paid 58.9% of it. https://t.co/CmVMciZwU2

Leatherwood arrived at Alabama as a five-star in 2017 from Pensacola, Fla. He became impactful in the second half of the 2018 College Football Playoff National Championship Game, replacing an injured Jonah Williams at left tackle. After helping the team to a championship, Leatherwood’s excellence in run blocking and pass protection would produce three Heisman finalists in 2020.

His protection of quarterback Mac Jones allowed DeVonta Smith to become the first wide receiver in Tide history to capture the Heisman Memorial Trophy. Leatherwood earned first-team All-SEC honors, Unanimous All-American honors, the SEC’s Jacobs Blocking Trophy, and the Outland Trophy in 2020. He anchored a dominant offensive line that won the Joe Moore Award and paced Alabama to an undefeated CFP National Championship that year. Leatherwood now looks to have success with the Bears.