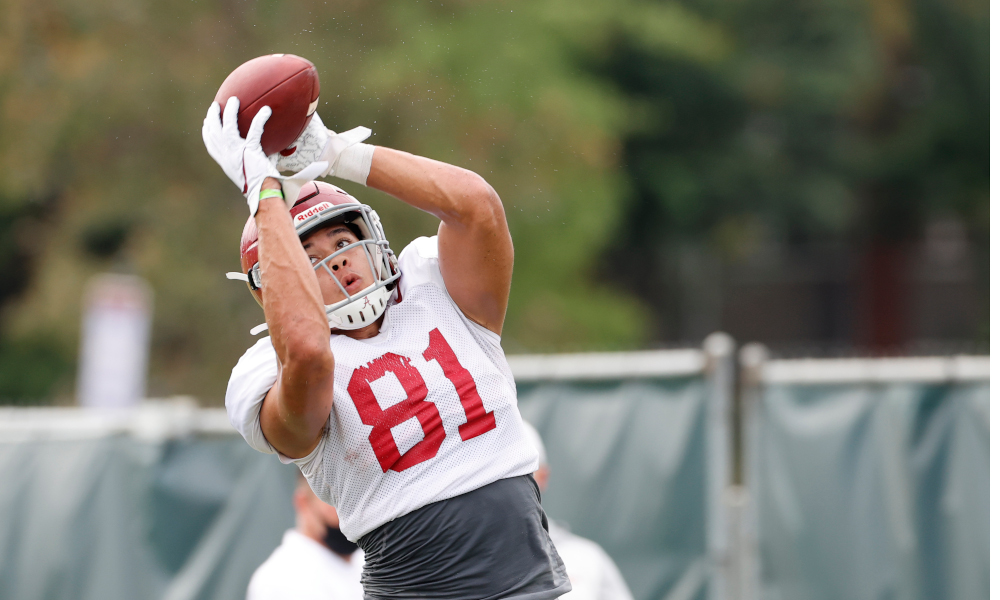 Alabama did not need him against Utah State, but it must have Cameron Latu back for Texas.

Latu, a senior tight end, suffered a knee injury in fall camp. He missed some time in practice, but he dressed out and went through pregame warmups before the matchup versus the Aggies. Latu looked smooth in blocking and receiving drills, yet Alabama’s coaching staff held him out. The 6-foot-5, 244-pounder set the Crimson Tide’s single-season school record for touchdown receptions (eight) by a tight end. Latu is the most versatile, athletic tight end on Alabama’s roster.

He can block, catch passes, execute routes, and line up outside at receiver.

Latu should play against the Longhorns, but it could spell trouble for the Tide if he is not at full strength. Miles Kitselman and Robbie Ouzts are not the receiving threats that Latu is. Both are traditional blocking tight ends that occasionally get rewarded in the passing game. Kitselman caught two passes for 18 yards, and Ouzts was targeted once against Utah State. Alabama had two freshmen, Amari Niblack and Danny Lewis Jr., that saw action last week. Neither is ready for the big moment as Niblack has to improve his blocking and Lewis does not have the speed of Niblack. It will be interesting to see how Joe Cox, Alabama’s tight ends coach, develops the position behind Latu. He has a connection with Bryce Young, and having Latu adds another marquee weapon.

Crimson Tide fans are hopeful that returns against the Longhorns.

Coach Nick Saban may provide an update on Latu during Monday’s presser to open game week versus Texas.