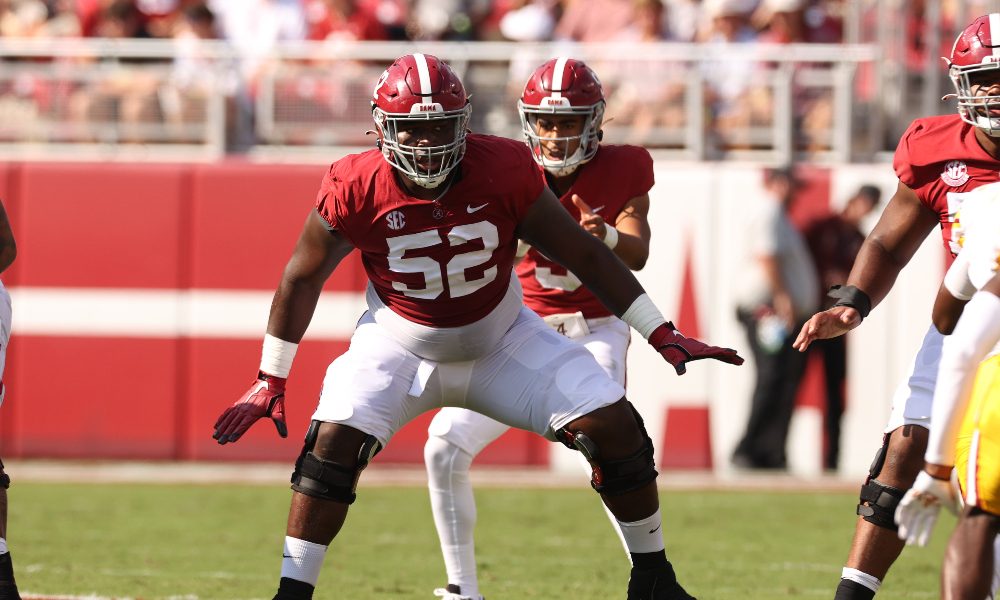 Alabama had a nasty, mean, and physical offensive line in 2020.

Each player has a place in the hearts of fans, but Landon Dickerson was the leader. His brand of toughness, physicality, and dominance led to the Crimson Tide having a perfect national championship season. The Tide seems to have found a freshman that carries the same passion as Dickerson. Tyler Booker arrived on campus in the 2022 class as the most versatile lineman.

As a five-star from IMG Academy, he can play either guard or tackle.

Booker made his presence felt in Alabama’s 63-7 victory at Bryant-Denny Stadium over Louisiana-Monroe. He created opportunities for all running backs to have marquee plays. Booker performed well in preseason camp — grabbing Nick Saban’s attention on the field. Javion Cohen and Emil Ekiyor have more experience, but Booker has Saban and Eric Wolford (Alabama’s offensive line coach) trusting him to be a starter. Saban mentioned the freshman competing for a starting job at either guard spot.

“He’s a young player who has played extremely well,” Saban said about Booker after the ULM game. “I have lots of confidence in him. He is physical, and we need to be more physical on the offensive line. We are going to play him.”

Roydell Williams, a sophomore running back, said Booker ‘plays with passion.’ Tyler Steen, a transfer from Vanderbilt, will face his old school on Saturday in Tuscaloosa, Ala. He’s played a lot of college football, but he is blown away by Booker.

“Book is another great player on the offensive line,” Steen said. “He is very physical, very mean, and very athletic. He brings that energy and juice from a young dude that it can get contagious. He is very aggressive.”

The 6-foot-5, 332-pounder is viewed as mean, physical, athletic, and aggressive by Coach Saban and several of his teammates.

Booker carries the size of a tackler, but the mentality of a guard. He is a force on the line that wants to start.

Tide fans will see more of Booker on Saturday against Vanderbilt.