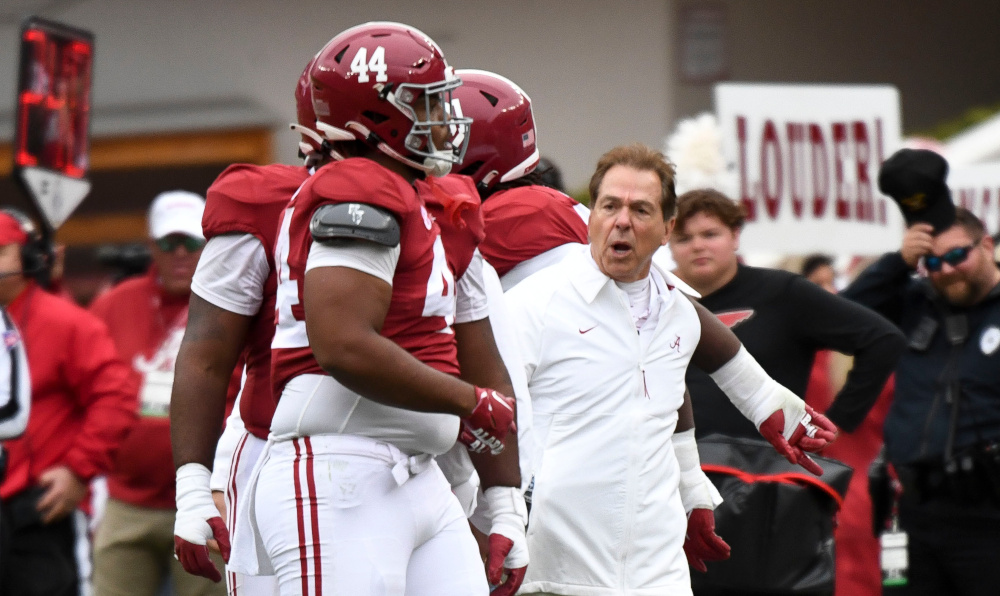 Many Alabama fans accepted the idea of the Crimson Tide not belonging in the College Football Playoff, following losses to Tennessee and LSU.

However, a different Tide team has surfaced since the second half of the Ole Miss game. Alabama performed well against the Rebels, Austin Peay, and Auburn — showing fight, toughness, energy, and effort. The defense did not look great in the Iron Bowl, but Bill O’Brien found some offensive creativity. Alabama scored 49 points, had balance in the running game, created plays for wide receivers, and had a healthy Bryce Young. After continuing its streak of 10-win seasons, Nick Saban credited the naysayers in the media and among the fan base for ‘bringing this Alabama team together.’ The Tide earned a 49-27 victory in Tuscaloosa, Ala.

RELATED: Paul Finebaum gives his thoughts on if Alabama should be ranked higher than Ohio State

“The thing I was the proudest of was when everybody thought they were out of it, and there were a lot of naysayers out there, this team did not give up,” Saban said after the Iron Bowl. “They did not give up on themselves or each other. They kept fighting and won some tough games to finish the season. I am proud of the fact that everyone hung in there and stayed together.”

Alabama sustained several injuries throughout the year, including a shoulder injury to Bryce Young. It forced other players to step up, and the Tide found different ways to win. Alabama has two losses on its record; however, it has the longest streak in major college football for 10-win seasons (15). Coach Saban explained the biggest message for the team during moments of adversity.

“I think a lot of the naysayers, a lot of the people that were very negative about this team, and a lot of the things that were said and written about this team united the players,” he said. “They would say things like ‘this is all we have but it’s all we need.’ I think if these are fans, and we have some great fans. We have great fans, a great stadium, and a great atmosphere tonight and we appreciate it, but negative people and naysayers if you are supporting the University of Alabama you are hurting the university and the program. It is a reflection of our culture and how positive we are. This program was built on positive.”

Saban recalled the first spring game he coached at Alabama and having thousands to support.

Emil Ekiyor Jr., a veteran offensive lineman, said it was ‘hard to ignore’ the criticism from naysayers.

“As a team, it brought us closer together,” he said. “We leaned on each other, and the saying we came up with was ‘we are all we got and we are all we need.’ I think it brought us together in these last few weeks, and it showed our togetherness rallying together as a team in tough situations. It helped us.”

He answered several sentimental questions about whether this will be his final season at Alabama, but Bryce Young talked about handling adversity too. The junior quarterback and reigning Heisman Trophy winner said it’s ‘something he does not do with a frown.’

“It is hard for everyone,” he said. “You go into long games and long hours, it is hard. I don’t regret it, I have enjoyed every moment of it. It has been enjoyable. The ups and downs, when you face adversity, that stuff sucks but I am always ready to fight with my brothers. I am truly grateful for the regular season we had.”

Alabama stands at No. 6 in the latest Associated Press Top 25 poll.

If it moves to No. 5 in Tuesday’s College Football Playoff rankings, the Tide has a chance to slip into the CFP.