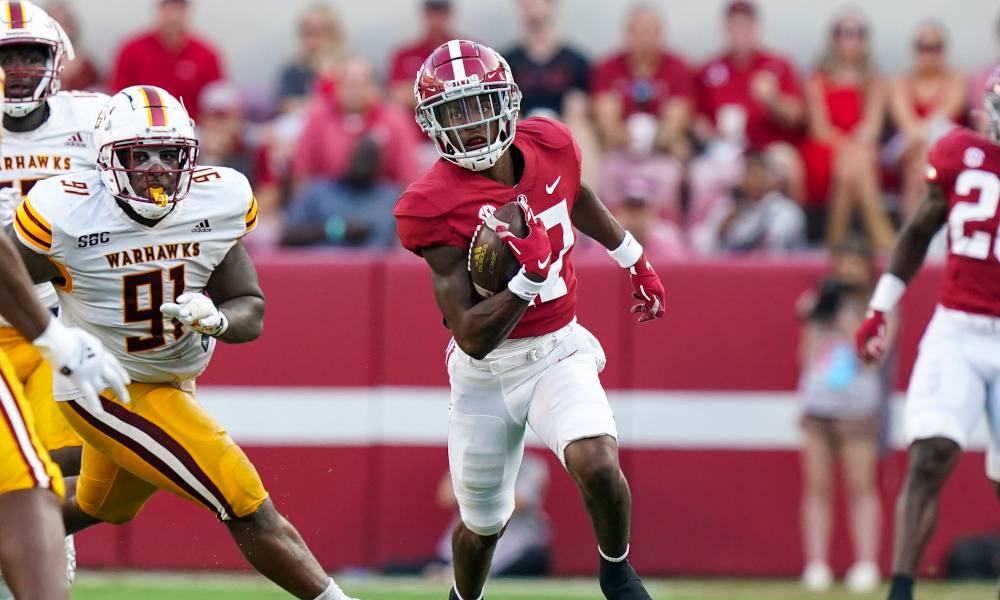 Jaylen Waddle made it a quartet a year later, but the trio of Jerry Jeudy, DeVonta Smith, and Henry Ruggs III had Brian Daboll/Steve Sarkisian rejoicing, quarterbacks happy, and defensive backs scared to death. Some thought the 2021 class of receivers would bring the same excitement; however, Agiye Hall is at Texas and Christian Leary is in the transfer portal.

RELATED: Alabama fans react to all players in the transfer portal from November

The Crimson Tide signed five receivers in 2022 and three were impactful this season.

Kobe Prentice, a native of Calera, Ala., finished with receptions (30) for 290 yards and a touchdown. Isaiah Bond posted 13 catches and Kendrick Law recorded eight receptions. Aaron Anderson and Shazz Preston did not have any stats, but both played in games. Anderson missed preseason camp because of a knee injury. He worked his way back toward the end the of the year, seeing action against Austin Peay and Auburn. The trio of Anderson, Law, and Preston all hail from the state of Louisiana.

All five wideouts have the potential to be great; however, junior quarterback Bryce Young highlighted Bond and Law as players with a ‘professional mindset’ after the Iron Bowl. Bond tied for the team lead in receptions (four) and totaled 36 yards in a 49-27 victory for the Tide over Auburn. Law collected two passes for 52 yards, including a long reception of 39 yards.

Young told reporters after the matchup that Bond and Law do not act as freshmen.

“IB and K-Law have done a great job of stepping up,” Young said about both freshmen receivers.

“You would not know they were freshmen by how they attack each practice, how they approach meetings and things like that. The moment is never too big for them. They play with confidence, and they play free. They have an energy about themselves.”

Alabama lost Leary and Traeshon Holden to the NCAA transfer portal. The Tide could lose another receiver to the portal, which would open starting opportunities for Bond and Law next spring. Alabama fans are anxious to see if Bill O’Brien remains as the offensive coordinator for a third year. If not, it will be interesting to see who the program hires to develop the talent in the offense.

Nick Saban has had studs at wide receiver since Julio Jones in 2008.  Alabama has seen ten 1,000+ yard receiving seasons since 2010. Bond and Law could become the first 1,000-yard duo since Jameson Williams and John Metchie in 2021 for the Tide.