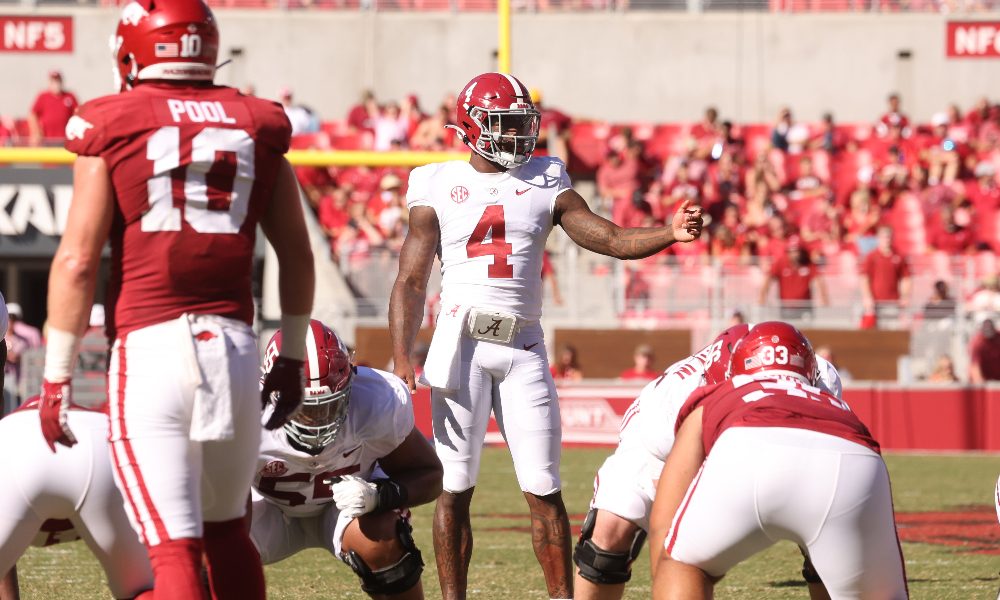 Bryce Young leaves the University of Alabama as one of the most accomplished quarterbacks in school history.

He helped the Crimson Tide to a College Football Playoff National Championship in 2020 and guided the team to a Southeastern Conference Championship as a starter in 2021. Young was a two-time permanent team captain, a Heisman Trophy winner, and earned several other individual accolades. As he turns the page to the NFL Draft, Tide fans now look toward the quarterback competition for spring practice and next season. Four names are battling for an opportunity to lead the 2023 version of Alabama football to a national championship, but which one will take the reins? A breakdown of all four players is below.

Jalen Milroe, a native of Katy, Texas, is the most experienced player in the competition.

As a former four-star in the 2021 class, he is a dual-threat quarterback. Milroe possesses a strong arm, but he’s more known for his athleticism as a runner. He finished last season with 265 yards rushing, including a 77-yard run against Arkansas. Milroe got his first start versus Texas A&M and made some plays in the passing game; however, he remains uncomfortable in the pocket.

The 6-foot-2, 212-pounder starts his third season (redshirt sophomore) in the spring. Milroe has to make significant growth in distributing passes with accuracy, timing, and placement. Alabama fans saw Jalen Hurts improve in 2018 under Dan Enos as a quarterbacks coach. Does Alabama need to make that move for Milroe? It could not hurt to try. He is an incredibly gifted athlete, but the Tide cannot afford to be one-dimensional and expect to win national championships with the competition getting better.

It has to have a signal-caller that can shred defensive secondaries with his arm. Milroe has to make substantial growth in the passing game if he wants to be the guy leading the offense.

Ty Simpson is entering his second season in the program.

He arrived in the 2022 recruiting class as a five-star from Martin, Tenn. Simpson took Westview High School to a state championship during his senior year, compiling 41 passing touchdowns to three interceptions. He had some shining moments in last year’s spring game and played in four games in the 2022 season. Simpson possesses the capability of making a variety of throws on a football field. He trains with QB Country, a network that helps players become complete quarterbacks.

Simpson, who is listed at 6’2″ and 198 pounds, looked like he added weight to his frame during the season. He is incredibly competitive and Alabama fans are starting to look at him as the guy that needs to win the job. Simpson brings mobility to the room, but he prides himself on being an accurate passer. He is the biggest challenge to Milroe and looks to show out.

Holstein, a Louisiana native, was one of the top quarterback prospects in the 2023 class.

He recorded 5,000+ (5,720) passing yards and 54 touchdowns during three years at Zachary High School. Holstein also displayed marquee athleticism with 23 rushing touchdowns for his career. The 6-foot-4, 222-pounder participated in Allstate Sugar Bowl prep for Alabama against Kansas State. He provided a defense a look at Wildcats quarterback, Will Howard.

Lonergan, a Georgia native, was a two-sport athlete at Brookwood High School. He played football and baseball, signing to the Crimson Tide as a four-star. Lonergan totaled 3,932 yards and 39 touchdowns during his junior season at Brookwood.

He brings sneaky athleticism and accuracy in the passing game.

It will be interesting to see how quickly do Holstein and Lonergan grab the playbook.