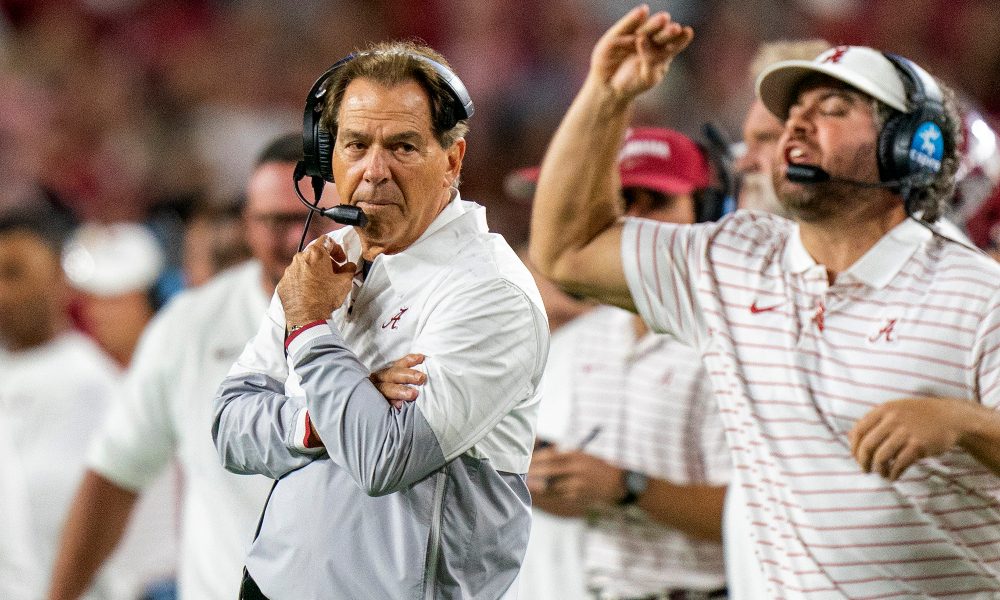 He did it before with Michael Locksley, and it became successful, but does Nick Saban look internally for Alabama’s next offensive coordinator with Bill O’Brien gone?

Saban does not have an on-field coach with offensive play-calling experience, but he has two analysts on staff that do.

RELATED: Who will Nick Saban choose to replace Bill O’Brien as offensive coordinator?

He could promote from within when one looks at Derek Dooley, Zach Mettenberger, Will Lawing, and Nick Cochran. Alex Mortensen, son of ESPN analyst Chris Mortensen, served as an offensive analyst from 2019 to 2022. He is now the offensive coordinator at the University of Alabama at Birmingham (UAB), but could Saban bring him back?

If he does choose the analyst route, below is a breakdown of Saban’s options internally on offense.

Derek Dooley is the elder statesman of offensive analysts on Saban’s staff.

The 54-year-old was on Saban’s staff at Louisiana State University from 2000 to 2004 as a tight ends coach, running backs coach, and assistant head coach. Dooley helped Saban capture a BCS National Championship with the Tigers in 2003. He was a head coach at Louisiana Tech and Tennessee while being an offensive coordinator at Missouri in 2018 and 2019. Dooley has also coached in the National Football League with the Dallas Cowboys (2013-17) and New York Giants (2021), working primarily with wide receivers and tight ends. He coached Missouri to 36.6 points per game in 2018 and helped Drew Lock total almost 3,500 passing yards (3,498).

Lock had 34 total touchdowns. He is currently in the NFL for the Seattle Seahawks.

Dooley coached Larry Rountree III to 1,216 yards rushing and 11 touchdowns in 2018 while forming an offense that allowed five receivers to record 20+ catches. College football is a fast game offensively, but is Dooley the one to create entertainment and balance?

He has the most experience.

Will Lawing would not have the best odds for Alabama’s offensive coordinator position; however, the 37-year-old does have some experience.

He served as passing game coordinator (2010) and offensive coordinator (2011-12) for Juniata College, a private school in Pennsylvania. Lawing would take his talents to Penn State in 2013 as a graduate assistant before following Bill O’Brien to the Houston Texans. He was a defensive quality control coach from 2014 to 2016, an offensive assistant from 2017 to 2018, and a tight ends coach from 2019 to 2020. Lawing followed O’Brien to Alabama in 2021 and joined as an offensive analyst.

He stays with the Tide, despite O’Brien’s decision to return to the NFL.

Alabama lost Alex Mortensen to UAB, but he would be the ideal off-field analyst to offensive coordinator for Nick Saban.

Mortensen was a quarterback in college for Arkansas and Samford.

He made the practice squad for the Tennessee Titans but started his coaching career early. Mortensen began as a passing game coordinator and quarterbacks coach for the New Mexico Highlands from 2012 to 2013.

He joined Alabama as a graduate assistant in 2014 after a season with the St. Louis Rams.

Mortensen observed Saban’s process for five years (2014-18), witnessing four Southeastern Conference Championships (2014-16, 2018) and two College Football Playoff National Championships in 2015 and 2017. He served as a wide receivers coach for the Birmingham Iron (Alliance of America Football League) in 2019 before returning to Tuscaloosa as an analyst. Mortensen helped Tua Tagovailoa, Mac Jones, and Bryce Young excel behind the scenes. He guided Tagovailoa to becoming the Crimson Tide’s all-time career leader for passing touchdowns (87) and propelled him to be a first-round pick in the 2020 NFL Draft.

Mortensen assisted Jones in setting a single-season school record for passing yards (4,500) and touchdown passes (41) in 2020.

He mentored Jones into a Heisman finalist, Consensus All-American, first-team All-SEC selection, and a first-round pick in the 2021 NFL Draft. Young became Alabama’s first quarterback to win the Heisman Memorial Trophy with Mortensen’s help. He reset the Crimson Tide’s single-season records for passing yards (4,872), touchdown passes (47), and total scores (50) in 2021.

If Saban could get Mortensen back, it would be huge for the Tide.