To compare or to appreciate, this is the question that SEC fans (especially Crimson Tide fans) and college football analysts have pondered over in the past few seasons. For most of us, the exciting yet unnecessary art of comparisons began during our childhood. In our youth, we compared everything, from candy (Starburst or Skittles) and video games (PS3 or Xbox) to movies (Spiderman or Batman) and whose grades were the highest.

These arguments, though, are looked at as petty and unimportant compared to what Alabama fans have been debating over for four years now: Who is the better coach? Is it Paul “Bear” Bryant or Nick Saban?  In our society today, we have seen the fashion world evolve. As individuals, we have never been afraid of flaunting our sense of style. We have had it all, from bizarre, edgy haircuts and all forms of Aeropostale clothing to being one with our jeans (Wrangler and Levi’s) and embracing suits. Having an eye for fashion is a good thing, but it doesn’t matter how many times people change their sense of style; one piece of attire will still remain iconic to Alabama fans (whether old or young) everywhere: the houndstooth hat.

The houndstooth hat is the fashion contribution that has changed the game from the 1960s to present. Though it comes in many colors, it is mostly recognized in a crimson and white pattern or a black and white pattern with an A on the side. Whatever embroidery or pattern you prefer is up to you, but while you are wearing a piece of history don’t forget who made the hat possible, coach Paul W. “Bear” Bryant. Coach Bryant was known for many things including class, leadership and demanding respect (whether you liked him or not). The one thing that Bryant is known the most for, especially in the South, was putting Alabama football on the map.

On Saturdays, every Alabama student and fan that piles into Bryant-Denny Stadium to watch a game focuses their attention on one pre-game event: watching “Our Tradition” (Dedicated to the Crimson Tide) on the Jumbotron. The 4-5 minute video portrays as a constant reminder to fans of the passion, determination, fight, heart, spirit and dominance that Alabama has played with from the 1960s to present.

The best moment in the video occurs at the end, when the fans and students cheer as the picture of the iconic coach Bryant appears on the screen. While he was on the screen, coach Bryant said one phrase that has been documented in the Crimson Tide history books as the phrase of the century: “I like for the people to remember me as being a winner because I a’int never been nothing but a winner.”

In his 25-year tenure as the head coach of Alabama, Paul W. “Bear” Bryant was a winner in every sense of the word. Bryant played at defensive end for the Crimson Tide in 1934 and won a national title as member of the team. Though he achieved success in winning a national champion and being named All-SEC second team in 1934, he never took his talents to the National Football League.

Instead of brawn, Bryant let his brain do the winning for him as he took all of his talents from playing at Alabama and used them to pursue a head coaching job. Before one can become a head coach, they must learn from someone who is already in the position. Coach Bryant was an assistant coach for five teams: Union (TN), Vanderbilt, North Carolina Pre-Flight, Georgia Pre-Flight and Alabama.

Though Bryant was the head coach for Kentucky, Texas A&M, Maryland and Alabama, his best years were with Kentucky, Texas A&M and yes Alabama.  Coach Bryant was with Kentucky for eight seasons (1946-1953) and compared to what they have now, the eight seasons with Bryant were the best seasons Kentucky has ever had in college football. With Bryant at the helm, Kentucky made its first bowl appearance in 1947 and won its first Southeastern Conference title in 1950. The most surprising statistics were the final AP rankings Kentucky had under Bryant. The Wildcats were ranked in the top 20 in five of the eight seasons with Bryant.

Bryant compiled a 25-14-2 overall record at Texas A&M and his next destination was Alabama to take the head coaching job from J.B. Whitworth as well as become athletic director.  Though Bryant took the reigns as head coach of Alabama in 1958, it was in 1961 that people began to see the beginning of domination for generations to come. In 1961, Bryant led the Tide to its first national championship defeating Arkansas in the Sugar Bowl. From 1962-1964, Alabama erupted with Joe Namath at quarterback and Bryant calling the shots. The Tide won the 1963 Sugar Bowl and its second national title in 1964.

Coach Bryant even wondered himself about was he down for the last count. In 1973, Bryant hit an extra gear and with a tremendous surge he set out to prove to fans and critics that he was still the man and a force to be reckoned with.  In 1973 and 1978-79, Bryant won three more national titles with Alabama, giving him six in all and 13 SEC titles with the Tide. Bryant ended his illustrious career with 323 wins. At the time, he was the most winningest coach in college football.

After Bryant retired, his disciple Gene Stalling took the helm. The Crimson Tide achieved success under Stallings, winning an SEC title and Bowl Coalition national championship in 1992. Alabama won four (1992, 1993, 1994 and 1996) SEC West Division Championships under coach Stallings, but after Stallings left the magic left and a horrible drought occurred.

From 1997-2006, Alabama experienced five things: pain, struggle, hardship, probation and disappointment. In 10 seasons, the Tide went through 5 different coaches (Mike DuBose, Dennis Franchione, Mike Price, Mike Shula and Joe Kines) hoping one of them would bring back the magic that Bryant and Stallings had. To the dismay of the Alabama faithful, none of the five coaches could restore the winning tradition and in just 10 seasons, Alabama went from the top of college football glory to the bottom of the barrel. People began to wonder will the Crimson Tide ever get back to the pinnacle of football greatness or will the shadow of coach Bryant be a reminder that the magic is now gone?

Just when everyone thought that magic was over for Alabama, a blessing came in 2007.  The blessing came in the form of a man who had coached Kent State, Toledo, Michigan State and LSU along with a few stints with NFL teams. Under the leadership of the late athletic director Mal Moore, Nick Saban was brought to Tuscaloosa to see if he could restore the winning tradition back to the Crimson Tide.

Saban was told that it would take him six years before he could win his first BCS title for the Tide, but this just fueled more fire into his motivation that he could do more. At the moment of Saban’s arrival in Tuscaloosa, one woman led a cheer or to some people a prayer in hope that Saban was the one. The cheer was “Praise the Lord, God is good. We got Saban.” In 2007, trying to get the team to buy into his system, coach Saban and the Tide struggled finishing at 7-6 for the season.

The following season (2008), fans started to rejoice and recognize that oh my goodness the magic was back. The Tide went undefeated in 2008, including defeating Auburn 36-0 in the Iron Bowl (Auburn won 7 out 8 Iron Bowls dating back to 2000 at the time). Though the regular season went well, the postseason went horribly wrong for Alabama. The Tide lost to Florida in the 2008 SEC Championship Game and was routed by Utah in the Sugar Bowl 34-17.

The magic had returned, but not in the form of a championship. In 2009, Nick Saban erased the shadow of Paul “Bear” Bryant out of the minds of fans and the bad taste that the past five coaches left in their mouths by winning a national championship. Like the Bear, Saban produced his first Heisman winner in 2009 that being running back Mark Ingram, Jr.

One thing that Bryant and Saban both have in common is that they know how to handle adversity. In 2010, Alabama was in the conversation for another national title, but it didn’t happen that way. Lack of leadership from players and injuries hurt the Tide, causing them to limp to a 10-3 season. The worst loss the Crimson Tide witnessed was in the Iron Bowl. It was the story of two halves.

The first half was completely dominated by Alabama, as they clicked on all cylinders offensively and harassed Auburn QB Cam Newton defensively. The Tide led 24-7 at halftime. In the second half, after a fumble through the back of the end-zone by Mark Ingram, Cam Newton and Auburn took over. The Tigers outscored Alabama 21-3 in the second half and in a ray of disbelief, Auburn beat Alabama 28-27 and went on to win the SEC title and BCS National Championship.

The year 2011 had great plans for the Tide, but Mother Nature wanted to put her two cents in. On April 27, 2011, a deadly EF-5 tornado ripped through Tuscaloosa and destroyed everything in its path. I understand that in the song “Sweet Home Alabama,” it talks about how the skies are blue, the sun shines and the grass is green, but on April 27 there was nothing sweet about Alabama, especially in Tuscaloosa.

On that day, citizens lost four things: lives, possessions, jobs and security. Despite, people coming in from all over the state to help the citizens Tuscaloosa recover and wearing T-shirts that had the phrase “T-Town Never Down” written on them, it meant nothing for the people who lost everything. To them the only one thing that could help right the ship was for the Tide to win another national championship.

Hearing the passion of the fans, coach Saban and the Crimson Tide went back to work. In 2011, Alabama won another national title. It was the second for coach Saban with Alabama and the team’s 14th overall. The 2011 BCS National Championship Game was a clinic of dominance by Alabama defensively.

Behind Courtney Upshaw, Don’t’a Hightower, Dre’ Kirkpatrick, Mark Barron and others, Alabama shutout LSU. They gave up just 92 yards of total offense and allowed LSU to cross the 50-yard line once. The dominance did not stop there. In 2012, Nick Saban and the Crimson Tide won its 15th national title and its third in a four year span. Behind a cast of great receivers, a talented running back tandem and QB AJ McCarron, the Tide dominated in 2012.

The best game by far in the 2012 season was the LSU game at Tiger Stadium (Death Valley) in Baton Rouge, LA. This was the first game that Alabama faced adversity and the game where AJ McCarron became a man. With 1:34 remaining in the fourth quarter and the Tide trailing 17-14, McCarron led a 5 play, 80-yard drive that capped off with a screen pass to TJ Yeldon for the game-winning touchdown. For the individual that told Saban it would take him six years to win one championship, Saban has outmatched him as he has won three national titles in six years and is anticipating more.

I don’t see why fans and analysts want to compare Nick Saban to Paul “Bear” Bryant. To me I think it’s stupid and unnecessary because both coaches have excelled in the one thing that actually matters, winning. It is a time and a place for everything and every coach has their opportunity to shine. For Bryant, it was the 60s, 70s and 80s. For Saban, it has been the past five seasons. Whether you are a Bryant fan or a Saban fan, it doesn’t really matter. What does matter is that as long as Alabama continues to dominate and the trophy cases are stockpiled with awards, the Crimson Tide winning tradition will continue to roll on. 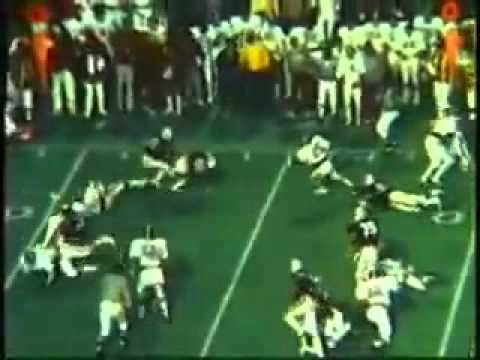