As people, we understand that history is made to be re-written and records are made to be broken. For Alabama fans, this will be the first time they will see the Crimson Tide take on Arkansas in October. The matchup in recent years has been played in September and it has been the game that opens up Alabama’s Southeastern Conference schedule. Bryant-Denny Stadium will be live and ready Saturday night as ESPN will air the Alabama vs. Arkansas Game at 7:00pm.

For the Alabama Crimson Tide, the defense has really improved since the matchup against Texas A&M. Alabama is first in the SEC and the nation in points allowed, surrendering just 11.3 points per game. Linebacker CJ Mosley and defensive back Vinnie Sunseri have been key contributors in the Tide’s success on defense this season. Mosley leads the team in tackles (48) and Sunseri leads the team in interceptions with two. As for defending the run, the Crimson Tide has allowed 87.0 yards per game (3.0 yards per game) and two rushing touchdowns so far.

It’s not just the running game Alabama keys on; the Crimson Tide has played the pass well this season too. Though opposing quarterbacks are completing 53.1 percent of their passes, they have only tossed six touchdown passes against Alabama. The Tide’s defense has four interceptions this season including two returned for touchdowns.

Every defense in college football desires to develop a dominant pass rusher and for Alabama it’s been awhile since they had it. In the 48-7 victory against Kentucky, the Tide found its pass rusher in true freshman A’Shawn Robinson. The defense has generated ten sacks so far and Robinson has four of them.

Just like the defense, Alabama’s offense continues to improve and take steps in the right direction. The Tide is fourth in the SEC in scoring, averaging 38.8 points per game. The offense line has continued to buy into Nick Saban’s process and it has paid off in dividends for them. Behind the line, Alabama’s offense is averaging 188.3 yards rushing (5.3 yards per carry). TJ Yeldon (88 carries for 569 yards and six touchdowns) and Kenyan Drake (41 carries for 298 yards and five touchdowns) have done a fine job on the ground thus far in aspect of getting yards down field, following behind the O-Line and using their vision.

AJ McCarron is having another efficient season under center. Currently, he is fifth in the SEC passing completing 68.9 percent of his passes for 1,407 yards, 11 touchdowns, three interceptions with a quarterback rating of 161.2.  This season, McCarron’s been spreading the ball to a variety of receivers. DeAndrew White, Christion Jones, Kevin Norwood, OJ Howard and Chris Black have really stepped up their game this season in helping McCarron. Though Amari Cooper has 12 receptions for 164 yards, he’s been battling a toe injury and hasn’t been the same since last season.

For the Arkansas Razorbacks, gone are the days of Houston Nutt, Bobby Petrino and John L. Smith. Behold a new sheriff is in Fayetteville and his name is Bret Bielema. In his final two seasons (2011-12) in Wisconsin, Bielema took the Badgers to two Rose Bowls. Now with Arkansas, he looks to bring his brand of ground and pound/play action pass from the Big Ten to the SEC. For the first time since 2005-08, the Razorbacks have a dominant running back core. In the past, Arkansas had Darren McFadden, Felix Jones and Peyton Hillis. This season, the Razorbacks have a dynamic duo in the backfield with Alex Collins and Jonathan Williams.

The thing that jumps out at a lot of people is both backs are built low and remind many Alabama fans of Mark Ingram and Trent Richardson. Both Collins (5-foot-11, 206 pounds) and Williams (6 feet, 220 pounds) have quickness to go along with power and vision. Both backs are very physical love to gain yards after contact. Combined, the duo has totaled 210 carries for 1,284 yards and eight touchdowns.

Arkansas may not have Ryan Mallet or Tyler Wilson anymore, but they do have a capable quarterback in Brandon Allen. In the 52-0 blowout last season, Allen was rudely introduced to college football by the Alabama defense. They constantly got pressure on him and forced two interceptions. This time, Allen will be out for vengeance in trying to knock off the No.1 team in the nation at Bryant-Denny. So far this season, Allen is 13th in the SEC in passing. He is completing just 48.1 percent of his passes for 864 yards, eight touchdowns, five interceptions with a quarterback rating of 115.0.

If Arkansas wants to compete with Alabama and try to keep the game close, Allen will have to pull a Johnny Manziel performance or at least a flawless performance out of his hat. He can’t afford to make mistakes in a hostile environment against a dominant defense. Unlike Texas A&M and Mississippi, Arkansas doesn’t have many physical receivers. However, Javontee Herndon (6-foot-1, 194 pounds) is the primary receiver in the offense. He has 18 receptions this season for 288 yards and four touchdowns. Herndon must create separation and get open in order to help out Allen in this game.

In his press conference this week, coach Saban said that this will be a physical game. He said that Arkansas lost to South Carolina last week and Alabama’s victory over the Razorbacks last year doesn’t matter. For Alabama, they are still focused on improving each week and trying to put on their best performance in all phases of the game. Some great news for the Crimson Tide this week is the reinstatement of star defensive back Ha Ha Clinton-Dix. After being suspended indefinitely early in the season for off-the-field issues, Clinton-Dix is back and may play in the matchup against Arkansas. 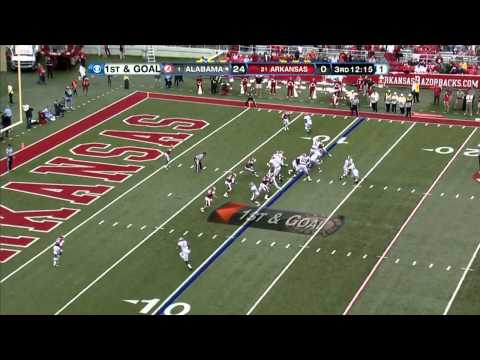