For those of you who think great quarterbacks in college football come a dime a dozen, it’s just as hard to find a balanced running back. In times past, coaches identified running backs as big bruisers. They looked for the players that had more power than speed, knock defenders over and gain huge yardage after contact. Nowadays, the game has changed. People are beginning to see more running backs that have a combination of speed, quickness, great vision, power and can catch the ball out the backfield.

As a native of Daphne, Ala., TJ Yeldon attended and played football for Daphne High School. Under head coach Glenn Vickery, Yeldon became a high school phenomenon and a household name.  Though he rushed for 1,121 yards off 201 carries (34 receptions for 361 yards and a touchdown) in his sophomore year, it was in his junior year that Yeldon exploded onto the national scene.

As a junior, he amassed 1,112 yards rushing with 18 touchdowns and caught a career-best 34 passes for 504 yards and five touchdowns. In his senior year, Yeldon had college scouts drooling as he completely dominated on the field. He totaled 232 carries for 2,193 yards (9.5 yards per carry) and 31 touchdowns. On the receiving end, he had 19 receptions for 506 yards and a touchdown. In 2010, Yeldon led Daphne High School to the Alabama 6A State Championship, in which they emerged as champions.

Yeldon was named Mr. Football in Alabama, by the Alabama Sports Writers Association. The ASWA also awarded him First-team All-State Selection. He was a second-team USA Today High School All-American and the 2010 Alabama 6A State Champion.

Every year the battle for starting running back at Alabama gets more intense, despite the fierce competition Yeldon still chose Alabama over Auburn, Florida, Arkansas and Clemson.

Unlike most freshmen who are forced to sit and watch their first year, Yeldon was poised to step in and make an impact. He did just that in the opening game of the 2012 season against the Michigan Wolverines. In the Cowboy Classic (Cowboys Stadium) at Arlington, Texas, Yeldon announced his entrance into college football. He rushed for 111 yards, scored a touchdown and became Alabama’s first true freshman running back to rush for 100 yards in his debut.

Five weeks later, Yeldon struck again with one of his best rushing performances of the season. Against the Missouri Tigers, he had a season-best 144 yards rushing on a season-high 18 carries and two touchdowns. Though his first touchdown of 27 yards was nice; it was his second one of 15 yards where he superman leaped from the 5-yard line and stretched the ball across the pylon that caused jaws to drop and eyes to pop.

After rushing for 129 yards (8.6 yards per carry) and two touchdowns off 15 carries against Tennessee, Yeldon and the Crimson Tide would head to the most hostile environment in college football, Tiger Stadium “Death Valley” Baton Rouge, La. In the venue that Les Miles coined as the place where opponents’ dreams come to die, Yeldon answered the bell and caused Miles’s phrase to backfire on him. Though he only had 76 yards rushing off 11 carries, Yeldon came up clutch on the most pivotal drive of the game.

With national championship aspirations on line and trailing LSU 17-14 late in the fourth quarter, Yeldon went from being wide-eyed freshman to hero being in the right place at the right time on the receiving end of a 28-yard screen pass from McCarron for the game-winning touchdown. It was his only touchdown reception in 2012, but it was the one that kept Alabama’s season alive and crushed the hearts of the LSU faithful.

Despite not gaining 100 yards against Texas A&M, Western Carolina and Auburn, Yeldon was still productive and was able to score a touchdown in each game. His superb rushing numbers bounced back in the SEC title game against Georgia. Behind a talented offensive line (three All-Americans); Yeldon collected a new season-high 153 yards rushing and a touchdown on 25 carries.

Coming into the 2013 BCS National Championship Game, every analyst raved about how dominant Notre Dame’s defense was. They were first in the nation in points allowed, surrendering 10.3 points per game. Behind the offensive line, Yeldon once again had a field day. He completely slashed and gashed the Irish for 108 yards and a touchdown off 21 carries and helped Alabama secure its 15th national title.

The prayers of most freshmen would be “Lord, just let me get on the field.” For Yeldon, his prayer was “Lord, now that I’m on the field help me accomplish something.” Along with winning an SEC title and BCS title, Yeldon achieved numerous awards as a freshman. He became the Crimson Tide’s first true freshman running back to rush for a 1000 yards. He tied Mark Ingram’s freshman record with 12 rushing touchdowns. He was named Freshman All-American by Sporting News and Scout.com.

Yeldon was among the SEC’s Top 15 running backs in 2012 and was ranked ninth in the conference in rushing, averaging 79.1 yards per game. He had five games (Tennessee, Missouri, Michigan, Notre Dame and Georgia) in which he ran for over 100 yards.

So far this season, Yeldon is on pace to having his second 1,000-yard rushing season. He is fifth in the SEC in rushing right now, with 88 carries for 569 yards (6.5 yards per carry) and six touchdowns. He has a great combination of power, speed and vision, but he has one problem, ball security. Last season, Yeldon had two lost fumbles (Texas A&M and LSU). So far this season, he has two lost fumbles (Texas A&M and Kentucky).

If Yeldon wants to go down as one the greats in Crimson Tide history for running backs, he must take better care of the football. He has to carry the ball with two hands and not be fancy with it. Against the Aggies and Wildcats, Yeldon fumbled the ball in the redzone. This is not good for Alabama if they want to have a chance to repeat again as champions. When you get in the redzone, defenses are going to go for the strip and try to knock the ball out. As a running back, it is vital for Yeldon to go in the hole with two hands wrapped tightly around the ball.

Coach Saban and running back’s coach Burton Burns will have to continue working with Yeldon on that aspect. Just like Saban is a stickler for execution and perfection, he is a stickler for ball security. He would rather have his backs gain nothing on the ground and keep possession than to pick up huge yardage, but fumble the ball. Alabama has had tremendous running backs from Bobby Humphrey and Shaun Alexander to Mark Ingram, Trent Richardson and Eddie Lacy. The difference between these guys and Yeldon is these guys knew how to protect the ball; Yeldon hasn’t gotten the aspect yet. When he gets ball security down, Yeldon could be one of the best in Alabama history. 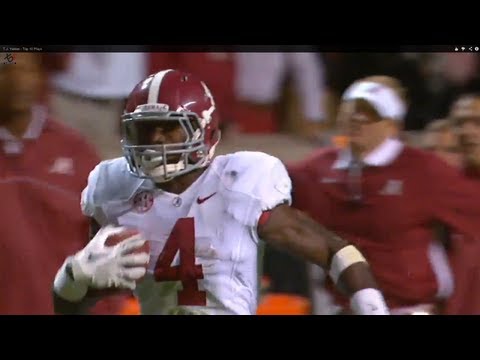