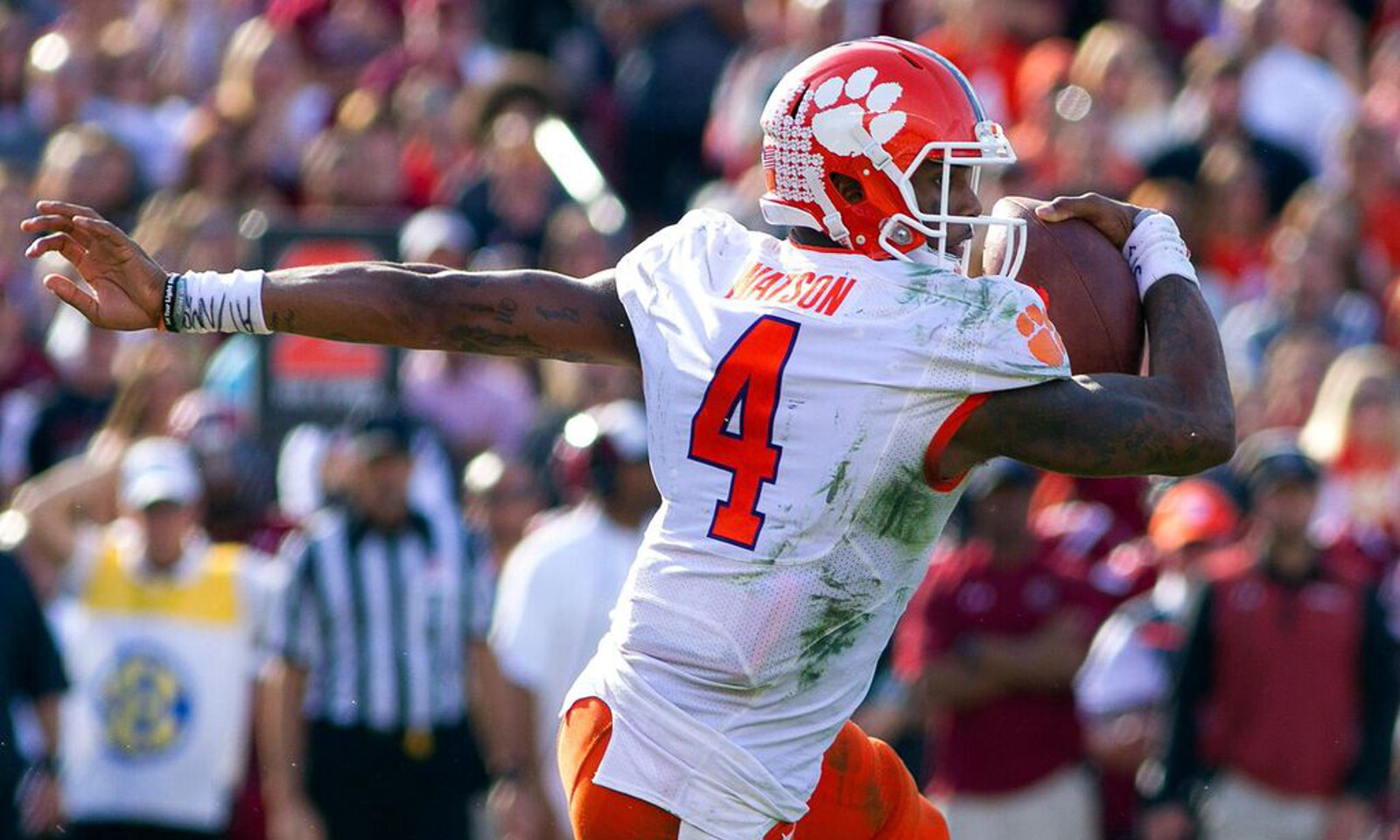 University of Phoenix Stadium in Arizona will be the site for next week’s College Football Playoff national championship game between Alabama and Clemson on Jan. 11

Both teams emerged victorious in their respective semifinal game. The Crimson Tide will play for a shot at its 16th national title in school history and fourth in the last seven years.

Head coach Dabo Swinney has Clemson in search of its first championship since 1981. The Tigers entered the playoff as the lone unbeaten FBS school at 13-0. Swinney has a complete team in Clemson for the first time since 2008. It chimes in with five straight 10-win seasons, dating back to 2011. An explosive offense (38.4 ppg) propelled the Tigers to a Atlantic Coast Conference title and the top-seed in this year’s playoff.

Yours truly of Touchdown Alabama Magazine has five Clemson players on the clock.

Tankersley anchors a Clemson secondary that averages 1.14 interceptions a game.

He leads the group in interceptions (five) and pass breakups (nine). Two of his five picks were returned for touchdowns.

His 44 total tackles are good for seventh on the team, with 2.5 resulting in a loss of yards. Tankersley will line up on Alabama wide receiver ArDarius Stewart, while his teammate Mackensie Alexander should see freshman Calvin Ridley.

Leggett is a match-up nightmare, especially in the red zone.

The 6-foot-5, 255-pound junior leads Clemson in touchdown receptions with seven. He chimes in with 447 receiving yards on 35 catches. Wide outs Artavis Scott and Charone Peake are solid complements. Scott has recorded 89 receptions for 868 yards with five touchdowns. Peake has five scores to his own credit, accounting 617 receiving yards on 44 catches.

Freshman Deon Cain emerged in the absence of Mike Williams. He stands third in receiving with 34 catches for 582 yards and five touchdowns. A failed drug test suspended Cain from the Orange Bowl, yet he poses as a threat if he can play against Alabama.

Gallman is an underrated running back in college football.

He possesses deceptive patience to alongside speed, vision and power. He tore through Clemson’s regular season schedule with 1,332 rushing yards and 10 touchdowns on 243 carries. Oklahoma defensive Eric Striker and the Sooners could not silence him, as he rushed for 150 yards and two scores on 26 attempts. Alabama’s defense will face a back in Gallman that averages 114 rush yards and 21 carries.

Lawson is Clemson’s tone-setter on defense.

His team-high 10.5 sacks ranks fourth in the ACC and he is one of the conference’s leaders in tackles for loss with 23.5.

He chimes in with 56 total tackles and five quarterback hurries. Lawson has been exceptional at winning one-on-one battles in the trenches. Alabama’s left tackle Cam Robinson will more than likely face him.

The junior played only one snap against Oklahoma in the Orange Bowl due to a knee injury. He is expected to suit up against the Crimson Tide next week.

Watson is the definition of a “dual threat quarterback.”

He has been masterful in commanding Clemson’s offense this season, after sustaining a knee injury (ACL) in 2014.

The sophomore has recorded 3,699 passing yards, 1,032 rushing yards and 43 total touchdowns to 12 interceptions.

He guided the Tigers to a perfect regular season, a conference championship and the No. 1 overall seed in the College Football Playoff. Multiple individual accolades have followed him, including most valuable player (ACC title game, Orange Bowl), ACC Player of the Year, ACC Offensive Player of the Year and Davey O’Brien Award. Watson finished third in the 2015 Heisman Trophy voting, behind Christian McCaffrey and Alabama’s Derrick Henry (winner).