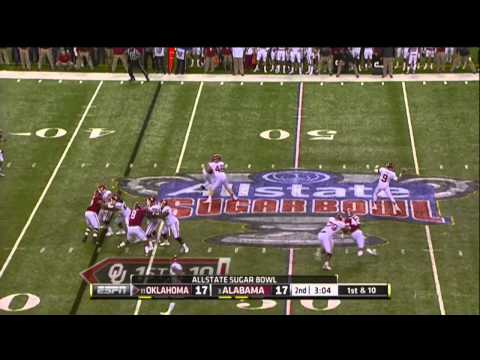 Oklahoma quarterback Trevor Knight has had an interesting career, with one iconic moment being “Firework” singer Katy Perry calling him her crush. Regardless of his skills and Perry’s love, the emergence of Baker Mayfield cannot be ignored.

He was a walk-on at Texas Tech, but has become a leader for the Sooners. Mayfield has been dazzling this season with 3,700 passing yards and 37 touchdowns to seven interceptions. He navigated the team to a Big 12 conference title and an appearance in the College Football Playoff.

Mayfield has a year of eligibility left, which has led to Knight making a decision to transfer. The former Sugar Bowl champion will relocate to the Southeastern Conference and play at Texas A&M. The Aggies would get an immediate starter who chimes with 3,424 passing yards, 25 touchdowns and 19 interceptions in 31 career games.

Alabama head coach Nick Saban and the Crimson Tide remember Knight as the guy who shredded its secondary in the 2014 Sugar Bowl. He tossed for 348 yards with four touchdowns and one turnover in a 45-31 win for Oklahoma.

It was one of the worst defeats in Saban’s nine-year tenure, as Alabama ended 2013 on a two-game losing streak.

Alabama has owned Texas A&M in the last three seasons, since losing to the Aggies in 2012. A 59-0 epic beatdown in 2013 was one of its high points. Knight will have to lead “Gig ’em” into Bryant-Denny Stadium, providing he wins the job.

Alabama is still salted and revenge is high.