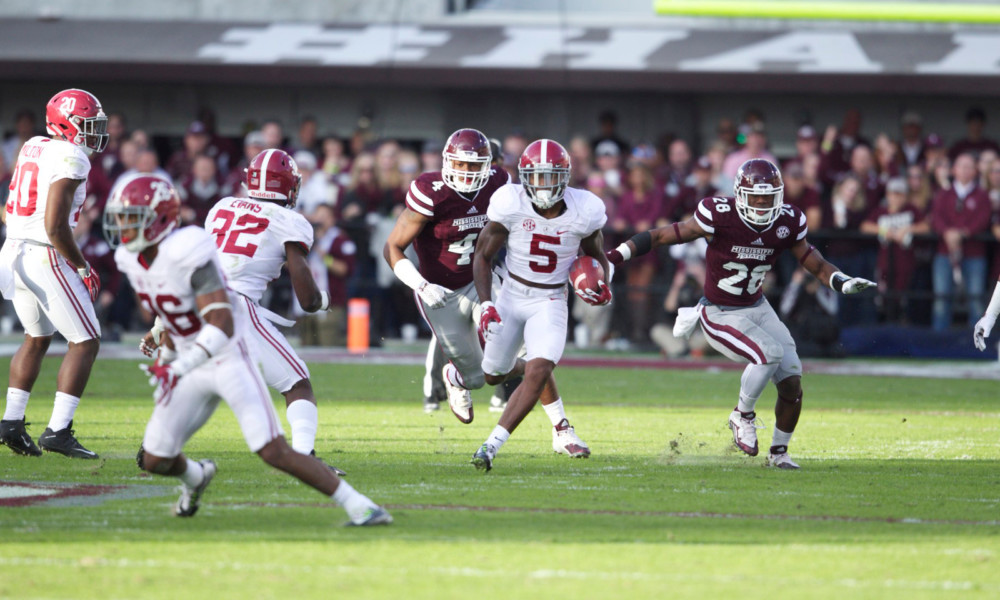 A loss to Ole Miss on Sept. 19 had mainstream media ready to write off Alabama from national championship contention.

Ever the motivator, Crimson Tide coach Nick Saban took an “us against the world” approach, resulting in 11 straight victories with one against Florida in the 2015 Southeastern Conference title game. Alabama would find itself as the lone team from 2014 that returned to the College Football Playoff.

Quarterback Jacob Coker was highly efficient and its defense gave Spartans’ quarterback Connor Cook all kinds of problems. It faces a different monster in Clemson, but the Tigers have yet to meet a fierce defense like Alabama’s.

The stage is set for what should be an entertaining national title game in Glendale, Ariz. Clemson was on the clock earlier, but now it is time to highlight Alabama’s impact players.

Regardless of height (5-foot-10), Jones has been Alabama’s steady coverage cornerback all season. He stands with 32 tackles, four tackles for loss, seven pass breakups and a forced fumble. One of his two interceptions came last week in a critical moment against Michigan State. Jones read the eyes of Connor Cook and picked the pass off in the red zone, ending the Spartans lone scoring threat. He has developed enact for big time plays on special teams late in the year. Jones chimes in with 518 punt return yards and four touchdowns. The senior became the first FBS player in 20 years to have an interception and a punt return touchdown in the same bowl game.

Allen has quick hands, solid footwork and exceptional technique in one-on-one battles. He leads Alabama in tackles for loss (14.5) and sacks with 12. The junior and Virginia native accounted for two of the team’s four sacks on Cook.

Allen anchors a defensive front that has 50 sacks and allows 74 rushing yards per game. His dominance in the trenches create pass rush opportunities for linebackers Reggie Ragland and Tim Williams, who is second on the team with 10.5 sacks.

A toss up between Ridley and sophomore wide out ArDarius Stewart would be fitting, but Ridley takes this spot because he will be a handful for Clemson’s corner Mackensie Alexander. The talented freshman abused Michigan State’s secondary, catching eight passes for 138 yards and two touchdowns. Two of his eight grabs were in excess of 50 yards. Ridley’s accounted for 1,030 receiving yards and seven scores on 83 catches.

The Mobile, Alabama native had a performance for the ages at AT&T Stadium. He completed 25 of 30 passes (83.3 percent) for 286 yards with two touchdowns and no turnovers against the Spartans. Coker’s confidence has grown with each outing on the gridiron. He bought solely into Saban’s process after a loss to Ole Miss and won over his teammates with toughness.

Targeting Ridley, Stewart and Richard Mullaney will be in the works for Coker against Clemson, but also look for tight end O.J. Howard to be involved. The junior brought in three passes for 59 yards against Michigan State. Coker has totaled 2,775 passing yards with 19 touchdowns to eight interceptions.

Even as a decoy, Henry attracted much attention last week.

Michigan State limited him to 75 rushing yards; however, he scored two touchdowns and opened up chances for Coker to attack. Henry leads the nation in rushing with 2,061 yards and 25 touchdowns on 359 carries. Alabama opened up its pass game in the Cotton Bowl, but look for offensive coordinator Lane Kiffin to establish Henry early against Clemson.

Tigers’ defensive lineman Shaq Lawson sustained a knee injury against Oklahoma, which limited him to one snap.

He leads the team in tackles for loss (23.5) and sacks (10.5), but the status of his knee will be an issue despite him playing.

Clemson allows 128.8 rushing yards per game, while Henry racks up 147 yards on 25 carries. Florida State’ Dalvin Cook was the “most complete” back that Clemson’s faced all year.